Russia is holding what it calls an “anti-terrorist” airborne military drill at its border with Estonia and Latvia that involves 2,500 troops and 500 units of equipment.

The large-scale drills that started on 5 July in the Pskov region are, according to the deputy commander of the Russian airborne forces, Lieutenant General Nikolai Ignatov, the second phase after the March drill that was held in the Opuk area in Crimea that Russia annexed from Ukraine in 2014, the Russian news agency, Itar-TASS, reported.

The troops are rehearsing the practical landing of military equipment and personnel by parachutes into unfamiliar landing areas, the news report said. “The main task of the landing units in the north-west direction is to provide an educational situation of an emergency and an anti-terrorist force method,” according to the report. 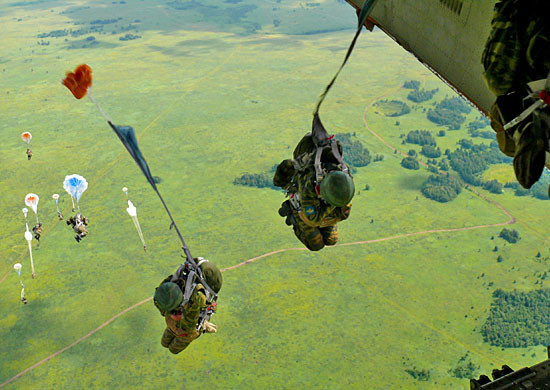 According to Newsweek, Russia has formally denied it would ever attack a NATO member, which Estonia and Latvia both are. But such promises have done little to assuage worries in these countries because during the annexation of Crimea, Russia also insisted its troops were not participating in it, and, moreover, Moscow continues to deny it has a military presence in eastern Ukraine.

Cover: Russian paratroopers (the image is illustrative/courtesy of Wikimedia.)