This meeting offers President Obama an opportunity to acknowledge the important contributions of the Baltic States to NATO and to highlight how far all three countries have come in embracing economic freedom and democracy since the end of the Cold War.

Importance of the meeting

The U.S. has been a longtime supporter of the sovereignty and territorial integrity of Estonia, Latvia, and Lithuania.

After World War I, the three Baltic States reestablished their independence, and the U.S. granted full recognition to all three by 1923. In June 1940, as part of the Molotov–Ribbentrop Pact between Nazi Germany and Stalinist Russia, Soviet troops entered and occupied the three Baltic States. A month later, acting U.S. Secretary of State Sumner Welles issued a declaration condemning Russia’s occupation and stating U.S. refusal to recognise the legitimacy of Soviet control over these three states. 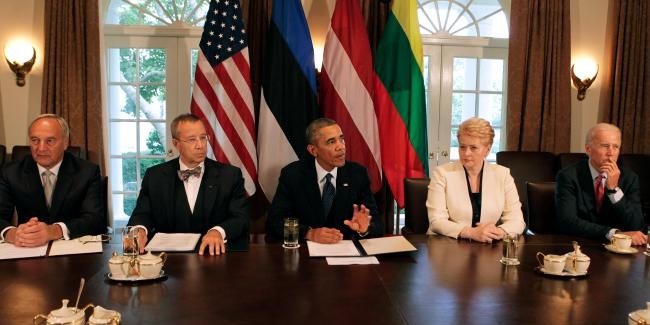 The Welles Declaration formed the basis of U.S. policy toward the Baltic States throughout the Cold War and allowed their governments in exile to maintain embassies in Washington, D.C. The three states regained their independence in 1991 at the end of the Cold War. However, the last Russian troops did not leave the Baltics until 1999.

The Baltic States have come a long way since reestablishing their independence after the fall of the Soviet Union and the end of the Russian occupation. Economically, the Baltic region is prosperous and stable. Democracy and the rule of law have flourished. In 1993, when the heads of these three states first met at the White House, President Bill Clinton was calling on Russia to speed up its troop withdrawal from Estonia, Latvia, and Lithuania. Twenty years later, all three are NATO members and have participated in NATO-led combat operations and training exercises.

Security: An example for NATO

Although small in absolute terms, the three Baltic States contribute greatly to NATO in relative terms. Estonia is the regional leader in defense matters and is currently one of only four countries inside NATO that spends the required 2 percent of gross domestic product on defense. All three countries sent troops to Iraq and have troops fighting in Afghanistan. Estonian troops are serving in Helmand province in southern Afghanistan — one of the most deadly areas in the country. NATO conducts its Baltic Air Policing mission from Lithuania, and the region has hosted multiple NATO exercises.

The Baltic States take the future of NATO seriously and have played an important role in shaping NATO policy on cybersecurity and energy security. Estonia established NATO’s Cooperative Cyber Defense Center of Excellence in 2008, one year after a cyber attack originating in Russia. Lithuania has been at the forefront of energy security policy and is home to NATO’s Energy Security Center of Excellence. It is constructing the first liquefied natural gas terminal in the region, which is expected to be ready by 2015. This will greatly reduce regional reliance on Russian gas and should offer new markets for the U.S. natural gas industry. Latvia, recognising the importance of strategic communications in the age of the Internet, digital media, and 24-hour news is planning to establish a NATO Strategic Communication Center of Excellence.

Economic freedom: A beacon of hope

In terms of economic freedom, the Baltic region is a beacon of hope for Europe and the rest of the world. The region is proof that pursuing policies of economic liberalisation and growth works.

Estonia ranks second in the eurozone and 13th in the world in the 2013 Index of Economic Freedom, published by The Heritage Foundation and The Wall Street Journal. Lithuania ranks a respectable 22nd in economic freedom and has proven itself open for business. Latvia ranks the lowest of the three at 55th, but is showing signs of improvement. The global financial and economic turmoil took a heavy toll on Latvia, but its economy is gradually recovering from the severe shock of the crisis. Encouragingly, the Latvian political leadership appears to be committed to reform.

U.S. relations with the three Baltic States can only be fully understood by considering Russia’s role in the region and its domination of the Baltic region over the past four centuries. This geopolitical reality is rooted in both history and geography. With the Cold War over, Russia no longer poses a direct military threat to Europe, but Russia’s future is causing concern in Europe and the U.S. For some NATO members, including the Baltics, Russia is a force driver in military planning and foreign policy formulation and may become an even greater one in the future.

Russia has reversed many of its post-Communism reforms it started after the collapse of communism. Democratic freedoms are in retreat, the state is paramount, and corruption is pervasive. While the economy is still growing, it continues to rely on exports of hydrocarbons, other raw materials, and weapons. Russia’s population is declining due to aging, rampant alcoholism and drug addiction, widespread disease, and low fertility. Expressions of ultranationalism are on the rise, which fortifies the quest for a new sphere of influence.

A step in the right direction

It is regrettable that the Obama Administration has taken so long to organise a meeting of this nature. In light of the Administration’s failed “reset” with Russia, the White House should use this meeting with the presidents of the Baltic States to recalibrate its focus on Eastern Europe.

Since regaining their independence in 1991, Estonia, Latvia, and Lithuania have made huge strides in democracy, security, and economic freedom. They are beacons of hope to other countries in the Euro-Atlantic family of nations. It is in U.S. interests to deepen ties with the Baltic States.

Disclaimer: This article was first published by The Heritage Foundation.