The United Kingdom will next year deploy batteries of high precision long-range missiles on the border between Estonia and Russia; the deployment is the first of its kind since the collapse of the Soviet Union.

According to the British media, the rockets will be moved to Estonia next year amid fears the Russian president, Vladimir Putin, may be planning to invade the country.

The Daily Mail said the rockets were a part of a huge military build-up by NATO countries to help defend Estonia, Latvia and Lithuania. 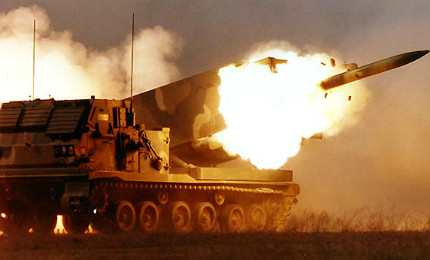 The rocket batteries – the Guided Multiple Launch Rocket Systems – fire as many as 12 missiles per minute and are capable of blowing up Russian tanks over a range of up to 45 miles (72 km), the Daily Mail adds. “The 200-lb warheads are guided towards their targets by GPS and are fired from missile launchers bolted onto armoured vehicles. At least 25 Royal Artillery soldiers are expected to deploy to Estonia to operate the GMLRS systems,” the newspaper says.

The Sun adds that these same rockets were used in Afghanistan “with devastating results.” “Roughly 410 of the missiles were fired at Taliban tunnel networks in Helmand Province,” the newspaper says.

In addition to the rocket batteries, the UK is set to supply drones, RAF Typhoon jets and Challenger 2 tanks to Estonia.

The Sun points out that tensions in Eastern Europe have risen since the US presidential election, with president-elect Donald Trump “challenging a NATO Article 5 principle that commits alliance members to defending each other from military aggression”, the newspaper asserted. “Trump suggested that US protection for the Baltic states would depend on these countries meeting NATO defence spending targets.”

The former Royal Army Commander, General Sir Richard Shirreff, said he believed it was necessary for hundreds of UK troops to remain in Estonia for the foreseeable future in order to make a stand against Russian aggression, the Sun said.