The United States defence secretary, Ashton Carter, announced during his visit to Tallinn on Tuesday that Estonia, Lithuania, Latvia, Bulgaria, Romania and Poland will host heavy military equipment, including 250 tanks, Bradley infantry fighting vehicles and self-propelled howitzers. The move is seen as part of the attempt to reassure the American NATO allies in face of Russia’s aggression in Ukraine.

“We will temporarily stage one armoured brigade combat team’s vehicles and associated equipment in countries in central and eastern Europe,” Carter said at a joint press conference with defence ministers of Estonia, Latvia and Lithuania, on the day when Estonia celebrated Victory Day.

The Estonian defence minister, Sven Mikser, confirmed Estonia was ready to pre-position the military equipment of a mechanised battalion.

“The Estonian government has allocated €40 million to improve the conditions for allied troops in Estonia. We will develop better training opportunities and establish the necessary infrastructure for the pre-positioning of the heavy military equipment,” Mikser said in a meeting with Carter.

The amount of equipment that would be temporarily stored in each country will be enough to supply either a company of around 150 soldiers or a battalion of about 750 soldiers.

Mikser and Carter also discussed the Estonian, Latvian and Lithuanian request for NATO to reinforce the permanent allied presence in the region. “We would welcome a battalion-sized presence in each Baltic country or a dedicated heavy brigade for the whole region,” Mikser said, adding that together with the pre-positioned equipment, persistent presence of that scale would send a sufficiently strong message to any potential aggressor.

Carter thanked Estonia for supporting the fight against ISIL and for a long-term commitment in the NATO ISAF mission in Afghanistan. He also commended Estonia for spending 2% of GDP on national defence. 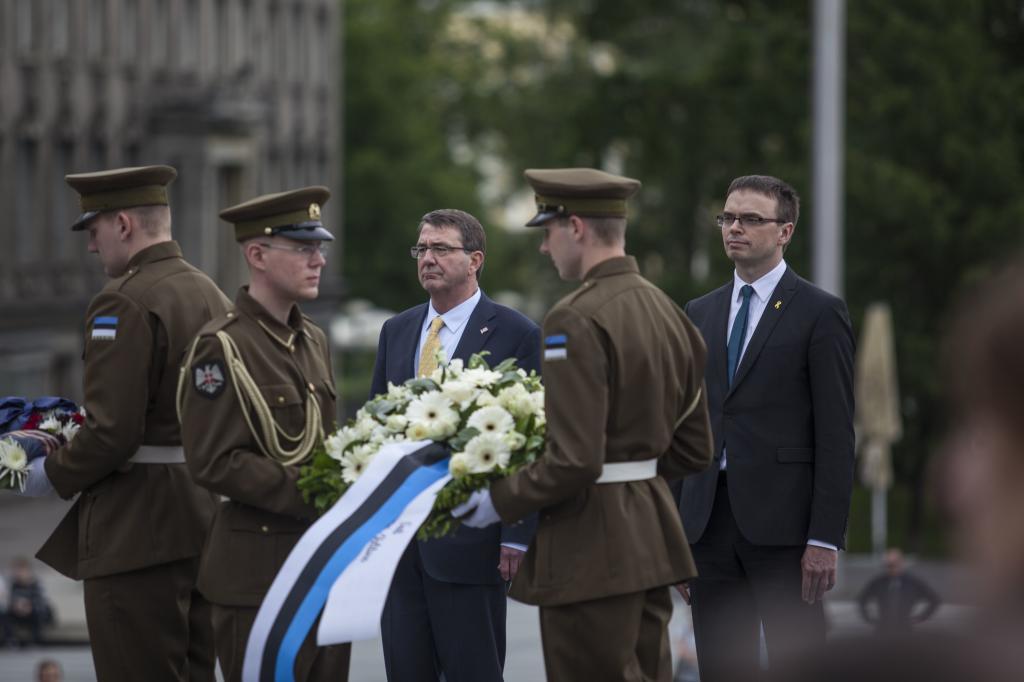 The defense secretary added that it was a “privilege” to be in Estonia on Victory Day, which commemorates the Battle of Võnnu, the decisive battle in the Estonian War of Independence in 1919, and honours the service and sacrifice of generations of Estonians in the cause of freedom.

Carter recalled a September visit by President Barack Obama where the president addressed the people of Estonia and NATO’s commitment to its members. “‘You lost your independence once before. With NATO, you will never lose it again,’” Carter said, quoting Obama. “That’s because the United States and the rest of the NATO alliance are absolutely committed to defending the territorial integrity of Estonia, Latvia and Lithuania, just as we are committed to defending all NATO allies,” the defense secretary said, adding that the meaning of NATO Article 5 is unambiguous. “An attack on one [NATO member] is an attack on all.”

Since the annexation of Crimea and Russia’s aggression in Ukraine, the three Baltic states have all asked further security guarantees, as NATO member states.

In late April 2014, the US stationed 150 soldiers from the US Army’s 173rd Airborne Brigade Combat Team to Estonia. Originally destined for bilateral infantry exercises, the growing concerns about the Russian Federation’s behaviour brought a decision to rotate the US troops in Estonia for as long as necessary, effectively making the permanent presence of American forces on Estonian soil a reality.

Cover: US tanks on exercise in Estonia in June 2015. Photo by Ardi Hallismaa, Estonian Defence Forces.