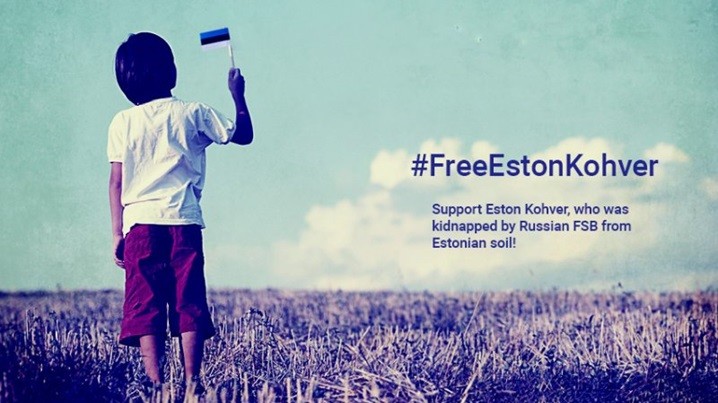 This is the hashtag that thousands of people in Estonia and around Europe have been adding to their social media postings in the last few months. I’m glad to add it to my blog, too.

Who is Eston Kohver? He’s an Estonian security services officer, who was abducted from Estonia on 5 September last year, and has been detained illegally ever since by the Russian authorities. This was the same day as the Wales NATO summit and two days after US President Barack Obama made a landmark visit to Tallinn, the capital of Estonia, and declared that the defence of Tallinn is just as important to NATO as the defence of Berlin, Paris and London. The main Russian news channels report that the FSB made the arrest; what they dispute is that it was in Estonia. Our Estonian allies are clear that it was.

What did he do? The Estonian government says Kohver was in the heavily forested border area as he was engaged in uncovering a counter-cross border cigarette smuggling operation. Russia says he was spying. We know that a great quantity of illicit cigarettes come into the EU from Russia, so the Estonian version is plausible.

An abduction across international borders is illegal, and needs to be condemned. The timing of his seizure also gave it great political significance – all involved in the operation (and there is no way in the FSB that such an operation could be conducted without high level clearance) will have known that it sent a threatening message to Russia’s neighbours.

Russia has also sent a signal that any trial in circumstances such as these won’t be conducted in a fair and open way. The trials and sentences given on 25 August to Oleg Sentsov and Oleksandr Kolchenko are further evidence of this.

Kohver’s trial was conducted without the Estonian consul being allowed to be present. He pleaded not guilty to the charges of smuggling, espionage, illegally carrying arms and illegally crossing the border – the last especially laughable. But on 19 August he was sentenced to 15 years in a labour camp.

It is essential that the UK and our partners continue to support Estonia and maintain solidarity and deterrence through the EU and NATO. Eston Kohver’s abduction, detention, and sentence are illegal and Russia must respect international law.

I have raised his case several times now with the Russian ambassador in London, pressing for his release and his return to his family, and will continue to do so. Our embassy in Moscow will continue to monitor his welfare and the UK will continue to support international action on his case.

He will not be forgotten. #FreeEstonKohver

The article was first published on the Foreign & Commonwealth Office blog. The opinions in this article are those of the author.

The Estonian Police and Boarder Guard on Wednesday published the protocol that confirms a border violation by Russia during the abduction of the Estonian security officer Eston Kohver on 5 September.

On 5 September 2014, operatives of the Russian Federal Security Service (FSB) illegally entered the territory of the Republic of Estonia, a member of NATO and the European Union, and kidnapped by force an officer of the Internal Security Service (ISS) of Estonia. On 19 August 2015, Pskov court in Russia sentenced Eston Kohver to 15 years in prison, for espionage and for illegally crossing into Russia and for carrying an illegal firearm.

The protocol in Estonian

The protocol in Russian

The facts we know today tell us the officer was definitely on the Estonian side of the border, and he was waiting for his supposed informant to show up and give him information on a case he was working on. The case had nothing to do with espionage, but was rather about cross-border criminal activity and contraband. Moreover, the ISS is Estonia’s internal security service, which means rather than spying on Russia it deals with issues that threaten Estonian national security inside Estonia’s borders.

Not political? Not provocative?

The Russian authorities, of course, see it differently. They claim the Estonian officer was arrested on the Russian side of the border, and he is suspected of espionage. He was taken to Moscow, charged in court, detained for at least two months, and, if convicted, faces 10-20 years in a Russian jail. And even though Russia’s own laws say that when a foreigner is arrested on Russian soil, the foreigner’s country’s authorities have to be notified within 12 hours, such notice was given to Estonia only on 8 September, and only a day after that was the kidnapped officer finally allowed to meet with Estonian representatives.

In light of all this, I’ve got to ask the political commentators and experts who say that the kidnapping was not politically motivated nor provocative, how can you say that? When the authorities of a country with whom you don’t have the best relations kidnap a security officer on your soil at gunpoint, drag him across the border and charge him with espionage, and then blatantly lie about all the facts surrounding the incident, how is that not political, how is that not provocative?

We’ve got to remember here that we’re not dealing with a normal country in the sense of the Western world. We’re dealing with a dictatorship with a very public expansionist agenda; a leadership that has publicly said its country’s neighbours are in their “sphere of interest”; a country that has, in the recent years, brutally attacked two of its neighbours, occupying considerable portions of their territories and killing thousands of people. We’re dealing with a country that arms thugs and terrorists in Ukraine, and those arms have been used by those same terrorists to shoot down a civilian aircraft, murdering 300 people in cold blood. We are, after all, dealing with the Soviet Union.

The fact is that even though in the beginning of the nineties there might have been signs that the Cold War was over, it actually wasn’t. There might have been a short truce, but Russia’s ambitions didn’t vanish, but grew. By leading the image of a developing democracy, Russia got stronger, Russia got more arrogant, and since the West didn’t want to pay enough attention, Russia again grew into the same dictatorial, murderous monstrosity the Soviet Union was.

Russia is an enemy of the West

Fortunately for Estonia, the one thing that has changed is the fact that Estonia is no longer occupied by the Soviet Union, but a full member of the Western world. Estonia is a member of the European Union and NATO. Estonia has, at least in theory, the Article 5 protection all NATO members have. Estonia is now the West – and that makes Russia also an enemy to Estonia.

We should no longer pretend or hide behind political correctness in this matter. Estonia and Russia are not partners, not peaceful neighbours, not even states that can peacefully coexist. Estonia and Russia, as the entire Western world and Russia, are bitter enemies in the Cold War that Russia has again reinitiated and is fighting on every front.

And now ask yourself – if the special forces of your enemy penetrate your territory and kidnap a police officer of your country, how is that not political? How is that not provocative? And, should we really not be afraid of what might happen next?

Today, the sad fact is, Estonia has to be ready for any scenario. With a powerful enemy just a three-hour drive from Tallinn, Estonia must today do everything it can to prevent further attacks on the country’s sovereignty. And that includes more forcefully demanding permanent NATO personnel and armory on its territory. That includes more forcefully demanding that the rest of the Western world sanctions Russia at every possible angle, even up to the point of completely sealing Russia off and leaving it floating in its own mess.

The Western world is, unfortunately, dealing with an enemy that understands force, and only force. Only a strong military presence in the countries around Russia, especially NATO member states, and only the strongest sanctions against the Russian regime can present such a force.

Cover photo: The Red Army entering Estonia in October 1939, effectively occupying the country. Today’s Russia behaves frighteningly similarly to the Soviet Union in the thirties. The opinions in this article are those of the author.

In light of the recent kidnapping of an Estonian security police officer by the Russian FSB, it may be worthwhile to take a look in the past. We may be shocked at the course of events in the last few days – and we may be especially astonished at the egregious disregard for a NATO member’s sovereignty – but the fact is, kidnapping Estonian citizens on Estonian soil is nothing new for the Russian authorities. In fact, back in the thirties, Soviet Russia kidnapped altogether 46 Estonian citizens, and brutally murdered border guards who were performing their duties, defending the Estonian border.

Even though the Republic of Estonia and Soviet Russia had signed a peace treaty in 1920 and, within it, the countries forwent any territorial or other demands to each other, the Soviet Union had always planned to occupy the country, whatever it took. And so, in the thirties, while actively making preparations for occupying Estonia, Soviet border guards started kidnapping Estonian citizens, mostly fishermen working on Lake Peipus and Lake Pihkva. The aim of those crimes was to get as much information on Estonia’s defence capabilities as possible – even though common fishermen might not have known anything.

In August 1936, Soviet border guards kidnapped four Estonian fishermen about a kilometer inside Estonian territory. The men were taken to the Russian side, interrogated for information about Estonian border guard stations and their personnel, Estonians’ general attitude and remuneration, and about the prices of goods in Estonia.

A month after that, in September, Russian border guards abducted three Estonian fishermen, again from inside Estonian territory. They were interrogated for information about Estonian border guard stations and police officers.

In December the same year, seven Estonian fishermen were kidnapped, again by the Russian border guards, and again from the Estonian side of the border. They were questioned about the locations of Estonian border guard stations, and whether they had any weaponry.

About a month later, in January 1937, eleven Estonians were abducted from Lake Pihkva, and interrogated about the Estonian Army, the Defence League and border guards. They were also asked about the layout of the villages they lived in, and using the data collected from them, the Russian border guards managed to draw detailed maps of those villages.

Altogether, between 1936 and 1937, Soviet Russia abducted 46 Estonian citizens who were taken from Estonia to Russia and interrogated about all aspects of life in Estonia, particularly the armed forces and the Estonians’ general attitude. When deported Estonian officers arrived at the Gulag in 1941, after the Soviet Union had already occupied the country and started mass murders and deportations, they found some of the kidnapped Estonian fishermen in the camp.

Unfortunately, the Soviet authorities didn’t stop at kidnapping. In February 1938, two Estonian border guards were kidnapped by force from the Estonian side of the border and taken to Russia. The aim of the abduction was to fake an unauthorised border crossing, and to perpetrate that, the Russian border guards murdered their Estonian counterparts in cold blood.

In both these instances, the Soviet state-controlled media blamed the Estonians for crossing into the Russian side, blatantly lying about what really happened. And in a particularly similar way, the Russian state-controlled media now accuses the kidnapped Estonian officer of crossing into Russia where he was supposedly “arrested”. Even though the free media of Estonia has photographic proof that a violent struggle happened on the Estonian side of the border, and the security officer was dragged by force to the Russian side.