A fast-charging network makes Estonia the first country in the world where you can easily drive your EV around in towns or in the countryside without worrying about the driving range or pollution.

The network, consisting of 165 fast chargers, was officially opened for use today; a single operator is responsible for the administration of all stations and the clients can use the same payment solution and technical support across the country.

Each Estonian town, as well as bigger villages now have their own fast chargers; the stations installed along highways maintain a minimum distance of 40 to 60 km. 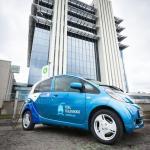 The EV users have three service packages to choose from, the cost of one charging is between 2.5 and 5 euros. However, you can also choose paying a 30 euro fee for a monthly package and charge your EV as often as you want with no extra cost. The car’s battery can be charged up to 90% in less than 30 minutes and – depending on the model – you will be able to drive for up to 140 km. The installation of fast chargers started in summer 2012 and they have been used 8,300 times so far.

According to the head of the Estonia’s EV programme, Mr Jarmo Tuisk, it was the lack of a proper fast charging infrastructure that hindered a more widespread use of electric vehicles until now.

“What makes the Estonian fast charging network unique is the fact that it uses a uniform payment solution and you can either use an authorisation card or your mobile phone for making the payment. We believe, that a nationwide grid of quick chargers encourages growth in the number of EV users, since the drivers no longer need to worry about a somewhat shorter driving range of their electric vehicles,” said Jarmo Tuisk.

The EV fast-charging network is operated by a national foundation KredEx, the chargers were produced and installed by a technology company ABB, the innovative payment solution was designed by NOW Innovations!, and customer support is provided by a security company G4S. Tallinn University of Technology adds a research dimension to the project by analysing the use of battery-powered cars and the charging network itself. That sets good preconditions for bringing electromobility R&D know-how together in Estonia.

The construction of the fast-charging network was financed by using the funds received pursuant to a CO2 emission quota sales agreement entered into between the Republic of Estonia and Mitsubishi Corporation.
Besides having a public fast-charging network, Estonia promotes a quicker deployment of EVs by providing direct support to both private persons and companies, with the amount reaching up to 18,000 euros of the all-electric car’s purchasing price. Also, new EV owners can apply for a support of 1,000 euros for setting up a charging system at their home.

According to CHAdeMO, an organisation supporting the fast-charging standard, by January 2013 more than 1,900 fast chargers have been installed in the world, 521 of them outside Japan. Estonia with its 165 fast chargers now has the world’s largest operational public fast-charging network providing a universal nationwide service.