After the global financial crisis of 2007–2008, Estonia’s economy started to grow again modestly in 2010. However, the budget for basic research has largely remained at the pre-crisis level. Taking into account annual inflation, the research budget has, in fact, been diminishing, but despite of this the standing of Estonian science has improved in the world.

As the professor of experimental psychology at Tartu University, Jüri Allik, points out in his recent paper on progress in Estonian science, Estonia deviates from other European countries in terms of how research is funded. Namely, more than 80 per cent of the country’s research funding is project-based, coming from the ministry of education and research, while in other OECD countries national project-based research funding makes up about 20 per cent on average and rarely exceeds half of the funding.

How have the diminishing financing and a heavy emphasis on project-based funding influenced the standing of Estonian science in recent years?

Surprisingly enough, bibliometric indicators of the progress in Estonian science have never been better. During 1996–2006, Estonian papers were cited 17.5 per cent less than the average paper worldwide, as registered by Thomson Reuters’ Essential Science Indicators (ESI) database. In the last eleven years (2004–2014), however, the average citations per paper authored by Estonian scientists exceeded the ESI mean citation rate by five per cent.

According to Allik, the success is related to the quality and fairness of the decision-making process in funding research projects. “Ever since Estonia regained its independence in 1991, most research funding applications have had to be written in English, which allowed for use of foreign experts who are more impartial than local experts. In addition, writing all applications in English was an invaluable practice for writing scientifically sound articles, to say nothing about internationally competitive and successful grant applications themselves,” Allik said.

Another important factor is that decision-making panels consist of the best active scientists rather than science bureaucrats. 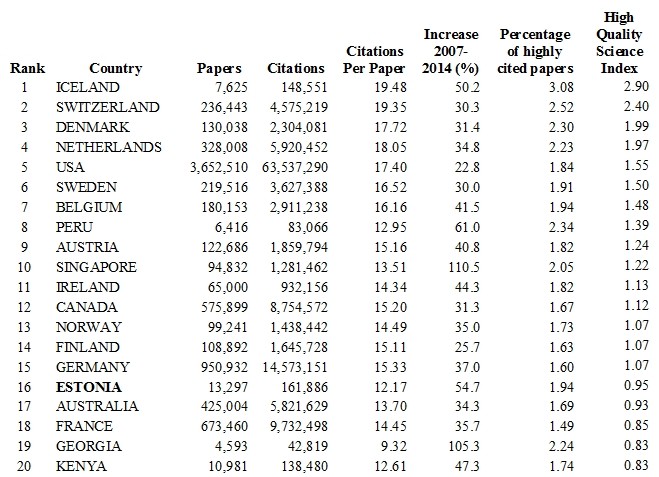 As we look at the key players driving the success of Estonian science, most of them work in biological and environmental sciences. Two-thirds of the 42 scientists who are among the one per cent of the most cited researchers in their field and are affiliated with an Estonian research institution are biologists or ecologists.

“Two-thirds of the 42 scientists who are among the one per cent of the most cited researchers in their field and are affiliated with an Estonian research institution are biologists or ecologists.”

“Each Estonian paper published in environment/ecology and plant and animal science receives about 40 per cent more citations than papers in these fields in general. In addition to these two fields, clinical medicine, molecular biology and genetics, physics, pharmacology and toxicology, and psychiatry/psychology are also above the global average. The fastest growth rate of impact was in computer science, in which the impact of papers increased more than 200 per cent,” Allik added.

20 per cent of the top scientists are women

Estonia passed the threshold established for countries or territories in all 22 fields of science, which is not always the case. Four Estonian institutions have reached the top one per cent in at least one discipline: the University of Tartu in nine disciplines, the Estonian University of Life Sciences in two, and the National Institute of Health Development and the National Institute of Chemical Physics and Biophysics in one each.

More than three-quarters of Estonia’s top scientists are affiliated with the University of Tartu, Allik himself among them. It is also remarkable that 20 per cent of the top researchers are women: Kessi Abarenkov, Aveliina Helm, Angela Ivask, Anne Kahru, Mari Moora, Anu Realo, Liis Rebane and Mari Nelis. “This is especially noteworthy in light of the fact that the Estonian Academy of Sciences has only two women among its 79 current members,” Allik noted. 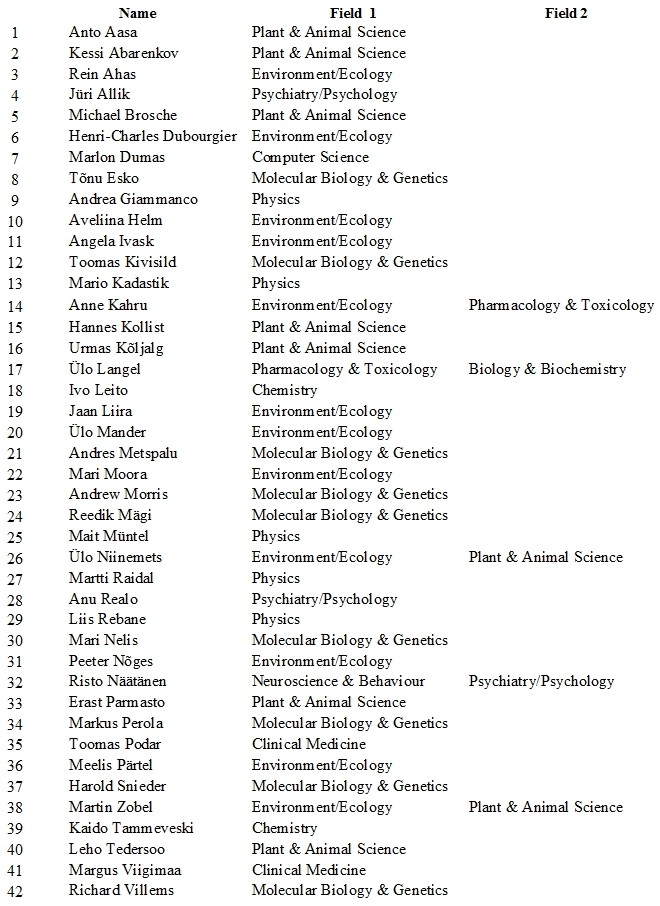 He pointed out that the list of top Estonian scientists was also telling in terms of the system’s openness. Namely, the list includes several foreigners (Michael Brosche, Henri-Charles Dubourgier, Marlon Dumas, Andrea Giammanco, Andrew Morris, Risto Näätänen, Markus Perola and Harold Snieder) who were invited to work either part or full time in Estonia. Several researchers of Estonian origin, for instance Ülo Langel and Toomas Kivisild, have their main affiliation with institutions abroad, but have another affiliation in Estonia.