The creation of new hobby groups for 10-19 year olds involve getting instructed in robotics, programming, mobile app and web design. 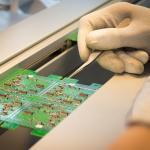 The idea was generated by Vaata Maailma Foundation which has been working on other IT education initiatives in Estonia since 2001 – such as helping with IT education programs for adults, as well as public awareness campaigns about IT, and creating 500 public Internet access points for those without computers to get online.

To start with, there will be 36 nationwide Smartlabs for about 500 pupils who want to improve and cultivate their skills in IT. The hobby groups take place after school and the teaching is conducted in three languages – Estonian, Russian and Seto, and one group is also for people with hearing difficulties. The private funding of € 90000 is coming from Microsoft – who has recently muscled up its presence in Estonia, first by snatching up Skype – as well as from EMT and Elion, telecom companies owned by Sweden’s TeliaSonera, Europe’s 5th largest telecommunications group.

The Smartlab hobby groups will be evenly split between junior and upper schools, and about half the investment will go towards robotics, with the rest going to mobile and web app design as well as other coding. Some groups will focus on specific areas like 3D modelling, or computer building.

Enn Saar, the chairman of Vaata Maailma Foundation, said: “Most of the hobby groups in Estonia are currently geared towards sport or music, dance and art. If we don’t offer the choice for after-school IT and science education, those with a knack for these subjects might not get their interest and talent elevated enough. In the long term, we are also hoping to substantially increase the number of IT-specialists in Estonia.” In a country where 3 year old kids spend their time playing games on ipads, these sound like wise words.