Estonia has scored 13th in the Nanny State Index among its European Union peers, meaning the country has thirteenth worst record when it comes to regulating people’s every-day lives.

The Nanny State Index, published by the Institute of Economic Affairs, gives every European Union country a score out of 100 according to how it regulates private lifestyle choices on alcohol, food, soft drinks, tobacco and electronic cigarettes.

“Taxes on beer, wine and spirits and all higher than the EU average in Estonia,” the analysis says. “The country has mixed rules on alcohol advertising, allowing it on TV and radio after 9PM, but banning wine and spirits advertising outdoors. Its near-total ban on tobacco advertising is typical of EU member states, as is its ban on cigarette vending machines, although it does not have graphic warnings or a display ban.”

On the other hand, Estonia’s smoking restrictions are less severe than most EU countries, the report admits. “A law that effectively prohibited the sale of e-cigarettes was overturned in 2013 and they can now be sold as consumer products. There are a few restrictions on vaping indoors.” 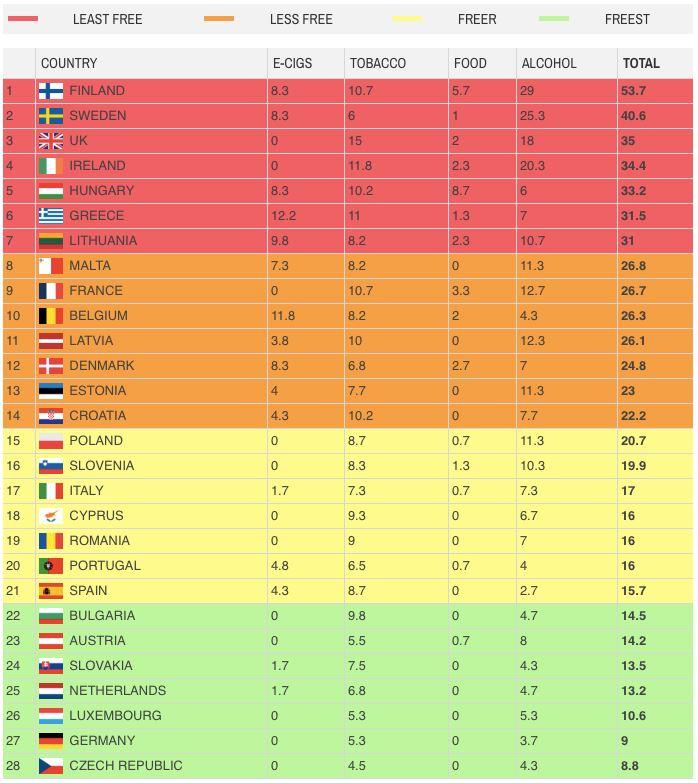 Estonia’s northern neighbour Finland scored number one in the 2016 index due to its taxes on chocolate, soft drinks, alcohol and tobacco. Finland also has an outright ban on e-cigarettes, a ban on happy hours and strict restrictions on advertising.

Christopher Snowdon, head of lifestyle economics at the Institute of Economic Affairs, said that the results “make depressing reading for those of us who want the government to keep out of our private lives”.

Another Estonian neighbour, Sweden, came in second worst in terms of regulations, and the United Kingdom – to many the epitome of nanny state – came in third.

The freest nations in the EU are, according to the Nanny State Index, Germany and the Czech Republic.

“Unless you are a teetotal, non-smoking vegetarian, my advice is to go to Germany or the Czech Republic this summer,” Christopher Snowdon told the British daily, the Daily Telegraph.