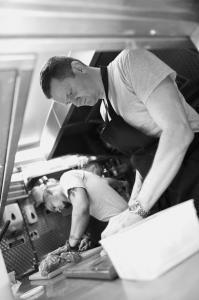 Andrey, who started his career in Sweden and Denmark, has been London based for the past 15 years. He has honed his skills at the Savoy Hotel, as well as working for Gordon Ramsay at Maze in the past. Having had a clear destination in mind, he worked towards his goal of opening up his own restaurant and managed this at the beginning of 2011. Verru, as his elegant 26-seat restaurant is called, is situated in the affluent area of Marylebone. Lesment’s menu reflects his background and influences from the Baltic and Scandinavian cuisine, yet he claims to have learned most of his cooking skills at the French influenced top restaurants of London. “The Estonian influence is in the nuances, mostly in the pure and organic ingredients”, says Andrey.

His cooking book of fusion Scandinavian-Estonian-French recipes is apparently also on the agenda.