An Estonian beverage company, called Punch Drinks, has invented a witty way to show its support for the Estonian LGBTQ community.

Although the gender-neutral civil partnership law (called Registered Partnership Act) was passed in Estonia in 2014 – the country became the first formerly Soviet-occupied state do so – the law has still not been properly implemented. After the 2015 general election, the coalition government changed and due to the opposition by the conservative Pro Patria and Res Publica Union, the implementing acts needed for the law to enter into force were left hanging in the balance.

Since then, the matter has become one of the fiercely debated issues in the Estonian politics – the radical right-wing parliamentary party, the Conservative People’s Party of Estonia (EKRE), has loudly voiced its opposition to the gender-neutral civil partnership law in general, while the Social Democratic Party has made it one of the cornerstones of its current programme.

With local elections happening on 15 October, the civil partnership law together with LGBTQ rights have once again become a fiercely debated topic of public debate. A new bill that intends to repeal the Registered Partnership Act, has been prepared by the EKRE – and the Legal Affairs Committee of Estonian parliament gave it a green light. On 12 October, the parliament will have the first reading of the EKRE’s bill.

Although it is not likely that the EKRE will succeed in repealing the act, that possibility nevertheless makes the country’s LGBTQ community nervous. Now, an Estonian beverage company has reached out to the community and found its own witty way to show support. 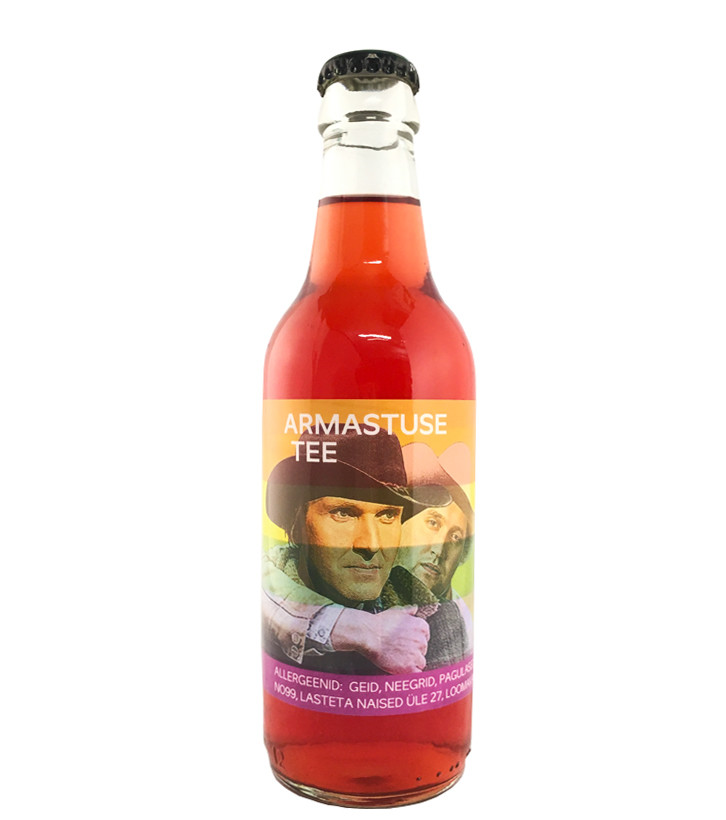 Punch Drinks has released an organic ice-tea called the “Tea of Love”, with a label that seems to depict two EKRE members of parliament – Martin Helme and Jaak Madison – who are mostly recognised by their radical political statements. The MPs seem to be hugging each other while dressed as cowboys – a setting that refers to the iconic Hollywood movie, “Brokeback Mountain”.

Coincidentally, the drink’s name is also a pun, as in Estonian the “tea of love” also means the “path of love”.

The company said the rainbow-coloured ice tea has already found its way to numerous bars and pubs of Estonia. The product’s website also features a small manifesto from the company, emphasising the intolerance of hate and bigotry and praising the idea of choosing love instead of hate.

According to Punch Drinks, 50% of the profit generated from the sales of the “Tea of Love” will be donated to the Estonian LGBT Association.

Cover: Bottles of “tea of love”.