A mission to translate the work of Estonia’s most influential poet into English is underway.

While Estonia has recently become internationally better known for its technological achievements, it has been somewhat slower in showcasing its cultural heritage. Arvo Pärt may well be one of the most performed living composers in the world, but there are still many who don’t realise that he originates from Estonia. There is even less knowledge about Eduard Tubin (1905-1982), another great Estonian composer. But at least, when one talks with a stranger about Estonian culture in London, Berlin or Paris, music would most probably top the league. With the quality education of classical musicians having produced world-class composers, conductors and singers, this tiny Nordic country truly punches above its weight. One could also mention a few names from the world of visual arts, perhaps followed by Estonian animation.

Unfortunately, very little is known about Estonian literature – simply because very little has been published in English. But the good news is that it is about to change. The last few years have seen some books by Jaan Kross being published in the UK and the US. Stockholm-based Haute Culture Books will soon put to print Anton Hansen Tammsaare’s “Truth and Justice” and Scotland-based LitTube Digital Publishing Ltd is in the process of publishing the work of new Estonian authors. Estonian folklore epos “Kalevipoeg” has been recently translated into English second time by Estonian Australian Triinu Kartus. Novelists Mati Unt and Toomas Vint have been finally discovered by Anglo-American publisher Dalkey Archive Press. Young poet Kristiina Ehin – in recent times the most successful Estonian poet abroad – is touring right now in Canada and USA, presenting her  poetry and stories in English. Thanks to her translator Ilmar Lehtpere, twelve of her books have been published in English.

An Estonian literary scientist Sirje Kiin, currently residing in the US, is now truly determined to publish the works of Marie Under – one of the greatest Estonian poets ever. Under was nominated for the Nobel prize in literature thirty times after the Second World War, but she never got it because Estonia was occupied, Under was a political refugee in Sweden and there were not enough good translations of her poetry in other languages.

But Kiin needs more support to accomplish this mission.

“I spent 20 years studying Marie Under’s life and poetry and in 2009 published a complete biography: ‘Marie Under. Life, Identity of the Poet and Reception of Poetry’. This book was nominated for the 2010 Estonian State Cultural Award and in 2011, it received the Swedish Under-Adson Foundation Literary Award,” Kiin said.

“In 2011, I published a second edition that focused more heavily on Under’s biography with less emphasis on a literary-scientific analysis of the reception of her poetry. This version is currently being translated into Russian.

“What remains to be done, however, is the most important foreign version of this work – a version in English. Over two billion people speak and read English and this number rises steadily each day. This translation will make the true story of Under’s genius and courage available to those who, up until now, have not been aware of her imaginative poetry and very moving life story,” she explained.

So who was Marie Under and why is she so important for Estonians? Like many Estonian cultural greats of the turbulent 20th century, who lived during the oppressive Soviet occupation, her story is full both of joy and sadness. 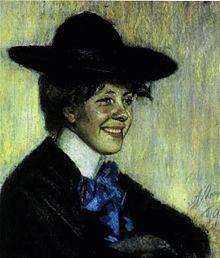 Born into the family of a teacher from Hiiumaa in 1883, she showed a talent for literature from an early age, starting to read at four and write her first poems at fourteen. She studied German, French and Russian in her early years in a private German Language School (her education helped her later to translate German poetry and drama into Estonian). After brief stints working on newspaper Teataja and filling her free time writing poetry in German (which at the time was considered as the most important language in Estonia, due to the country’s history), she got married in 1902 and lived in Moscow for four years. During this period it was the Estonian artist, Ants Laikmaa, who convinced Marie to start writing her poetry in Estonian. It is also believed that Laikmaa fell in love with her and he also painted many portraits of the poetess.

In the twenties and thirties she wrote masterful ballads and poems of a philosophical nature and became one of the most awarded poets in Estonia. During the first Soviet occupation of 1940-1941, she started to write very brave and patriotic poetry, compassionate towards the people who suffered deportations and war. This is the time when the whole nation fell in love with her and she became Estonia’s conscience, who had courage and ability to express the nation’s deepest feelings and sorrows.

In 1944, before the second Soviet occupation of Estonia, Under and her family fled to Sweden in a little ship and without ever seeing her homeland again, lived in Stockholm until her death in 1980. There, she worked for a short period as a part time archivist in the Theatre Museum at Drottingholm and was a member of the Swedish Writers League. She continued to write political and philosophical poems until the end of her long life at 97. The publication and circulation of her poems was forbidden in Soviet Estonia and several Estonians even suffered prison sentences for possession of her books, quoting her poetry in their correspondence, or for reading them to others. Political illicitness only added to her fame and increased the nation’s love of her poetry.

Her introspective poems found in the volumes “Hääl varjust” (Voice From the Shadows), “Rõõm ühest ilusast päevast” (The Joys of a Beautiful Day) and “Õnnevarjutus” (Eclipse of Happiness) are found to be extraordinarily intense and are considered among the best in Estonian poetry by literary critics. The main theme of her poems in her later years was the conflict between mankind’s desire for happiness, beauty and satisfaction and society’s lies, shabbiness, unfairness, power fixation and the general misery of mankind.

“Marie Under was the Estonian Goethe, our most influential poet of 20th century. She was nominated for the Nobel prize in literature thirty times after the Second World War.”

“Marie Under was the Estonian Goethe, our most influential poet of 20th century,” Sirje Kiin pointed out. “Under was nominated for the Nobel prize in literature thirty times after the Second World War, but never won it. Many speculate that this was because Estonia was occupied by the Soviets and she was a political refugee in Sweden. Others have argued that there were not enough good translations of her poetry in other languages. We can now, finally, let the world know how great a poet Marie Under was and how her extraordinary life reflected the dramatic destiny of her nation”.

Kiin uses an Estonian kickstarter website Hooandja to secure funding for the project to translate Under’s poetry and biography into English.

“The well-known international publisher Peter Lang has stated its readiness publish this book in English, but only after a translation is available, and this is why I need help. A shortened version of the book, focused only on Under’s life and translations of her poetry, will require at least half a year of work by two translators, but could be ready as soon as the summer of 2014. The project requires financial support of €13,000, which is why I have turned to Hooandja and ask all the Estonians and Estonia’s friends interested in promoting Under and therefore Estonian literature around the world, to support it. All sponsors will be awarded and mentioned in the English version of the book,” Kiin said.

This project has so far collected more than four and a half thousand euros from 28 supporters, mostly private donations from Estonia and USA, but among supporters are also Estonian Relief Committee in Canada and Estonia’s biggest daily newspaper Postimees. The deadline for the project to collect its funds is 18 October.

EstonianWorld.com is proud to support  such a great initiative of presenting an Estonian cultural heritage and is encouraging our readers and followers to help take the story of Marie Under’s life and poetry to the world stage. You can support this project on Hooandja’s website.

Question (a poem by Marie Under)

We saw those berries, over-ripe and glowing,
in weak and tepid light of the October sun
persisting red as blood, in right full-growing,
without much inkling of the winter clouds to come.

And then a wind-gust brushed those heavy bunches:
and some of them burst, falling to the ground
on wilted grass, soon after, under branches
gold leaves with purple berries lay around.

And hand in hand we walked uphill together
and pushed by the capricious wind’s bad weather,
eye to eye, as in anxiety, we asked:

our love’s moist, joyful red in present flowering,
will life’s wind carry it away, devouring,

or will it fall to the grave’s soil, and last?