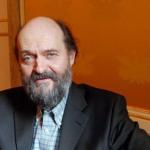 Bachtrack.com put the 77-year-old Estonian in 54th place overall in its “Concert and Opera League Tables 2012,” a list created from a sampling of 12,597 concerts and 4,451 opera performances.

According to Bachtrack.com, the league table contains the composers who featured in the greatest number of concerts during the year: a composer gets an entry if at least one work was performed in a given concert.

The only two other living composers who found their way into the list’s top 100 were Eric Whitacre (78th) and John Adams (89th).

Pärt is known for his minimalist style as well as for the compositional technique he invented, tintinnabuli, which takes its influence from spiritual chant.