Leen Rampe (née Võrno) and Siimon Rampe are a wife-husband team passionate about Estonian film. They have run monthly film sessions called KiNO! nights at the Sydney Estonian Cultural House for over a year now and finished 2012 off with an Estonian Film Festival in Australia.

Leen has a Master’s degree in Scenography from the Estonian Academy of Arts.  She has worked for several years as a set and costume designer as well as Art Director for Estonian movies and TV ads. Leen moved to Sydney in 2008 and now works at the Museum of Contemporary Art as well as for the annual Sculpture by the Sea festival. 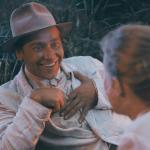 Siimon is from Wollongong, an hour south of Sydney but has lived in Sydney most of his adult life. Having started an internet communications degree, he has never studied art in any medium, but naturally gravitates towards it. He has been a keen surfer for most of his life and is currently working as a stevedore. Siimon is a dedicated family man who would love to move to Estonia with his family one day (despite no surfing there).

I talked to them both about their love for film and tried to find out their motivation behind doing such an admirable job in promoting Estonian cinematography.

What is your relationship with Estonia?

Leen: I am an Estonian living in Australia.

Siimon: My father is an Australian Estonian and mother is Australian. I am Estonian citizen myself and have visited Estonia enough times to start loosing count.

Leen: Film is my first love, my husband is my second (laughing). I always liked film, since I was a kid. In kindergarten, I was asked who I wanted to be. After I realised that I couldn’t be a dog, I decided that I would be an artist – an animator. When I finished high school, I found the Department of Scenography at the Estonian Academy of Arts. After producing my first film set, I was hooked – creating a whole world for the film was mesmerising to me!

Leen: My reasons to promote Estonian film are definitely personal. I am detached from Estonia and this is my link with it. I have worked in Estonian film industry and I understand it. Now I want to be more involved in Estonian things but film comes naturally to me. That’s why.

Siimon: There’s nothing as morbid as Estonian film (laughing jokingly).

What is your favourite Estonian film?

Siimon: “Tühirand” because from an outsiders point of view, it is a fairly good representation of the Estonian vibe.

Leen: It’s not so easy to answer. My taste changes over time and some films that I didn’t perhaps understand or liked before, have started making sense and growing on me now.

Where did you get the idea to start showing Estonian films at Sydney Cultural House?

Leen: From my husband. We had talked about it and he had suggested it. When we went to Estonia in summer 2011, Siimon said, “call your friend in the film industry and ask what he thinks about it” and that’s how it started.

Have your expectations about monthly KiNO! nights met the reality?

Siimon: Slightly disappointing, but not surprised. When we started, we had a figure in mind. We were hoping to attract around 40-50 people. The numbers have gone up and down. But we have our audience now. The same people are coming back. We haven’t seen as many young backpackers from Estonia as we hoped for though!

What are the plans for future?

Siimon: We will run another year of KINO! nights, but we will broaden the choice of films. Countries like Sweden and Finland will also be included in the attempt to get more people to attend. If our plan will not succeed after another year, we won’t run the monthly nights anymore.

We are also looking into doing Estonian Film Festival again in 2014, but then during Australian winter, sometime around May or June. Winter is a time for film festivals in Sydney, renting a proper cinema would be much cheaper then.

Both Leen and Siimon agreed that organising a film festival is difficult and expensive. Nevertheless, the local Estonian film lovers as well as the Sydney Estonian Society are grateful to the couple for embarking on such an endeavor.