On 28 April, British singer-songwriter and guitarist Steve Hackett brings his Genesis Extended show to Tallinn’s Nokia Concert Hall. Since early 2013, Steve Hackett has been touring with his all-star band, playing the Genesis material that first brought his name to the global attention.

Steve Hackett joined Genesis – which would become one of the world’s most famous progressive rock bands – in 1971, shortly after the band’s formation. Hackett placed an advert in Britain’s Melody Maker Magazine, stating that he wanted to join a band “determined to strive beyond existing, stagnant music forms”. The ad immediately caught the eye of Genesis vocalist Peter Gabriel and as a result, Hackett found himself playing lead guitar in the band. Hackett’s willingness to embrace new musical ideas and innovative performance techniques helped create the classic Genesis sound, one which fused the harmonic sophistication of European classical music with elements of northern European folk themes along with the electric virtuosity of modern rock. Hackett’s electric playing is often other-worldly, employing a vast sonic pallet which takes the sound of the electric guitar beyond normal expectations. His acoustic playing is deeply informed by the modern-classical traditions of Hackett’s childhood guitar hero, Andrés Segovia.

After Genesis’s record-breaking 1977 world tour, Hackett left the band and embarked on a successful solo career, which took his music to places even more exotic than Genesis. Over the years Hackett has recorded electric progressive rock albums, music with R&B vocalists, Brazilian music, rock collaborations with Brian May of Queen and Steve Howe of Yes and Asia, traditional blues and pieces of nylon-string classical guitar and a symphony orchestra.

Hackett recently finished the initial recording for an album of eclectic music, but before putting the finishing touches on this, he will return to Estonia for a long evening of classical Genesis music. Steve Hackett played a special role in bringing Western European rock to Estonia when it was still occupied by the Soviet Union. He was one of a handful of international stars to play at Tallinn’s famed 1988 rock festival, Rock Summer. Because of the logistical troubles of putting together a large electric rock band, Hackett performed his entire set on his acoustic guitar. In recent conversations with Hackett he has said it was a challenging yet rewarding experience, taking a quiet acoustic guitar and using it to reach to the very back row of a 100,000-strong audience of Estonians hungry for musical, political and social revolution.

Hackett’s experiences in the Soviet-occupied Estonia help give one the sense of what it was like going to Tallinn as a foreigner on the verge of the Singing Revolution and restored independence. Hackett explained that all foreign musicians were housed on one level of the same hotel where each hallway was monitored by a grumpy looking official. Because of the erratic nature of travelling to Estonia in 1988, Hackett had little time to explore the country but recounts a very memorable departure. Upon leaving the hotel he had to exchange currency as it could not legally be brought outside of the Soviet borders. He approached the stern looking official in his hotel, took all of the money he had with him out of his pocket and handed it to her. She immediately burst into tears. Hackett was not aware of the specific value of the money but assumed that the stipend given to prominent foreign visitors was much more than a minor official in Estonia would have made in 1988.

After meeting with Hackett I asked him some further questions about his previous experiences in Estonia and what he hopes to deliver when he returns to Tallinn in April.

When you played at Rock Summer in 1988, on the verge of full Estonian independence, could you sense the historical magnitude at the time or did this only become apparent later?

I became increasingly aware of it when we were there as there was an excitement and nervousness in the air. The national flag had just been raised.

Compared to comparable events in the UK, Switzerland or North America, what was the organisation of the 1988 festival like?

The festival was very good. It was well organised and the crowd was really enthusiastic, even though I was playing an acoustic show at the time. It was shown live on national TV.

Apart from the festival, what did you see in Estonia during that visit?

I saw how beautiful the old part of the city was and people were really friendly in the streets.

You’ve performed once in Estonia since 1988. When was that and how had things changed?

About three or four years later I performed again there. Things were different and more relaxed. It was as if the 1960s had arrived suddenly! 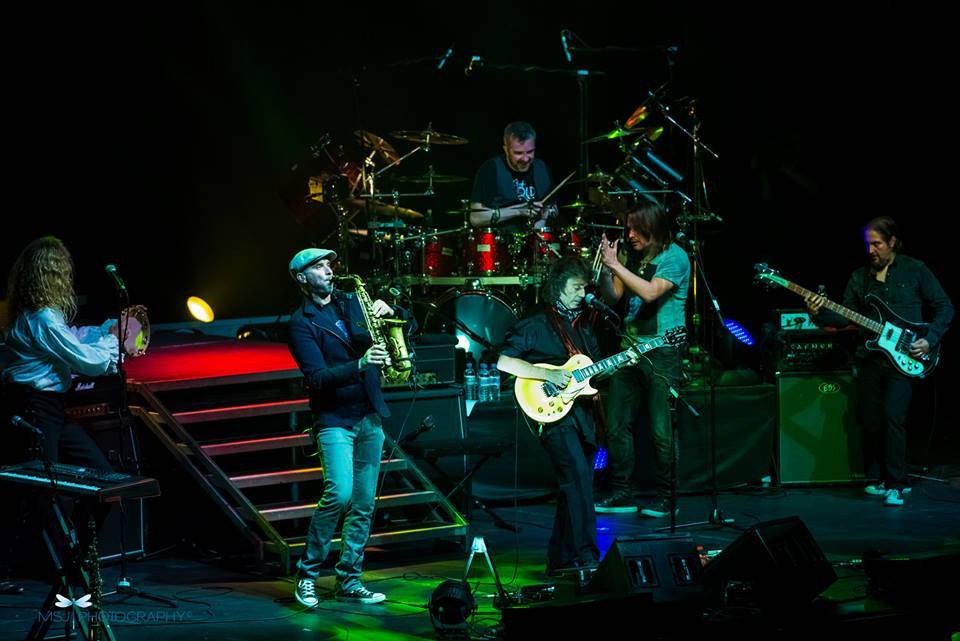 What does the current tour hold in store for Estonian audiences who never got the chance to see Genesis play live?

It’s a full show of classic Genesis tunes from the 1970s with a band that loves playing the material.

In spite of Soviet occupation, in the 1970s Estonia had one of the biggest progressive music scenes outside the UK. What message do you have for young Estonian musicians interested in reviving progressive music in Estonia?

I know there are lots of fine musicians in Estonia because I have seen them in Tallinn. I advise that you stay true to the music you love and show everyone how exciting and interesting progressive music can be.

If there’s anything else you’d like to tell the Estonian fans about what to expect on the new tour, please feel welcome.

The band gives a powerful performance and the lighting is equally exciting, so it’s a spectacle and we’re going for many of the most popular songs from the era. We look forward to joining you all in Estonia.