Christmas time is still the most important holiday celebrated in Estonia. For Estonians, Christmas is a mixture of the traditional, the modern, the secular and the religious.*

Like in other Nordic countries, Estonia’s celebration of Christmas mostly falls on Christmas Eve; however, Christmas season starts from the first Advent with people buying Advent calendars or lighting Advent candles.

Christmas is marked by the pre-Christian word jõulud in Estonian. In the country’s folk tradition, Christmas has a double meaning: on one hand, it is marking Christ’s birth, on the other, it marks the whole period of the mid-winter holidays. The magic and mysticism are combined with the sacred and spiritual.

In the traditional folk calendar, Christmas time began with St Thomas’s Day on 21 December and lasted until Epiphany on 6 January. On the islands and on the coast, the holiday continued for another day until St Canute’s Day on 7 January. The most important event was the festive Christmas Eve on 24 December.

The Estonian word jõulud is of ancient Scandinavian origin and comes directly from the word jul and has no real connection with Christianity. It is interesting to note that Scandinavia, along with Estonia, form the only area in present Europe where the birthday of Jesus Christ is still marked by the pre-Christian word of jul – jõulud. Despite this, in some places in South Estonia, talvistepüha (winter holiday) is also used to mark the Christmas holidays and it is considered to be a direct influence from the neighbouring Latvia where Christmas is known as Ziemas svetki (winter fest).

For thousands of years, nations have celebrated winter and summer solstices, which in Estonian folk-tradition are known as Christmas and Midsummer Night (23/24 June). The word näärid, also used to mark winter holidays, is of German origin and was the only official seasonal holiday in the atheistic Soviet Union. To some extent, the words jõulud and näärid, marking the festive events of the turn of the year, had the same meaning. 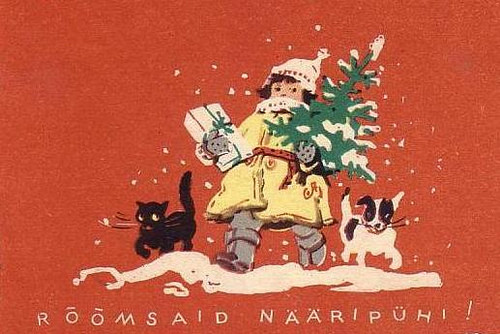 Jõulud as the winter solstice, when the day is the shortest and the night the longest, is celebrated from 21-25 December. According to folk tradition, “the sun was laying in the nest” and the day was celebrated as the Sun’s birthday. From that day on, the Sun started to rise and move slowly to the north again.

At the same time, Christmas was the culmination of the late autumn celebrations, which began with the harvest bees and continued with All Souls’, St Martin’s and St Catherine’s Day celebrations. The connection with Jesus Christ, compared with the ancient local pagan Christmas traditions, is relatively recent and had not gained prominence until the last few centuries. At the same time, according to the local Christmas traditions, these celebrations, especially Christmas Eve, reflect everything connected with the habits and most necessary needs of the local peasantry. 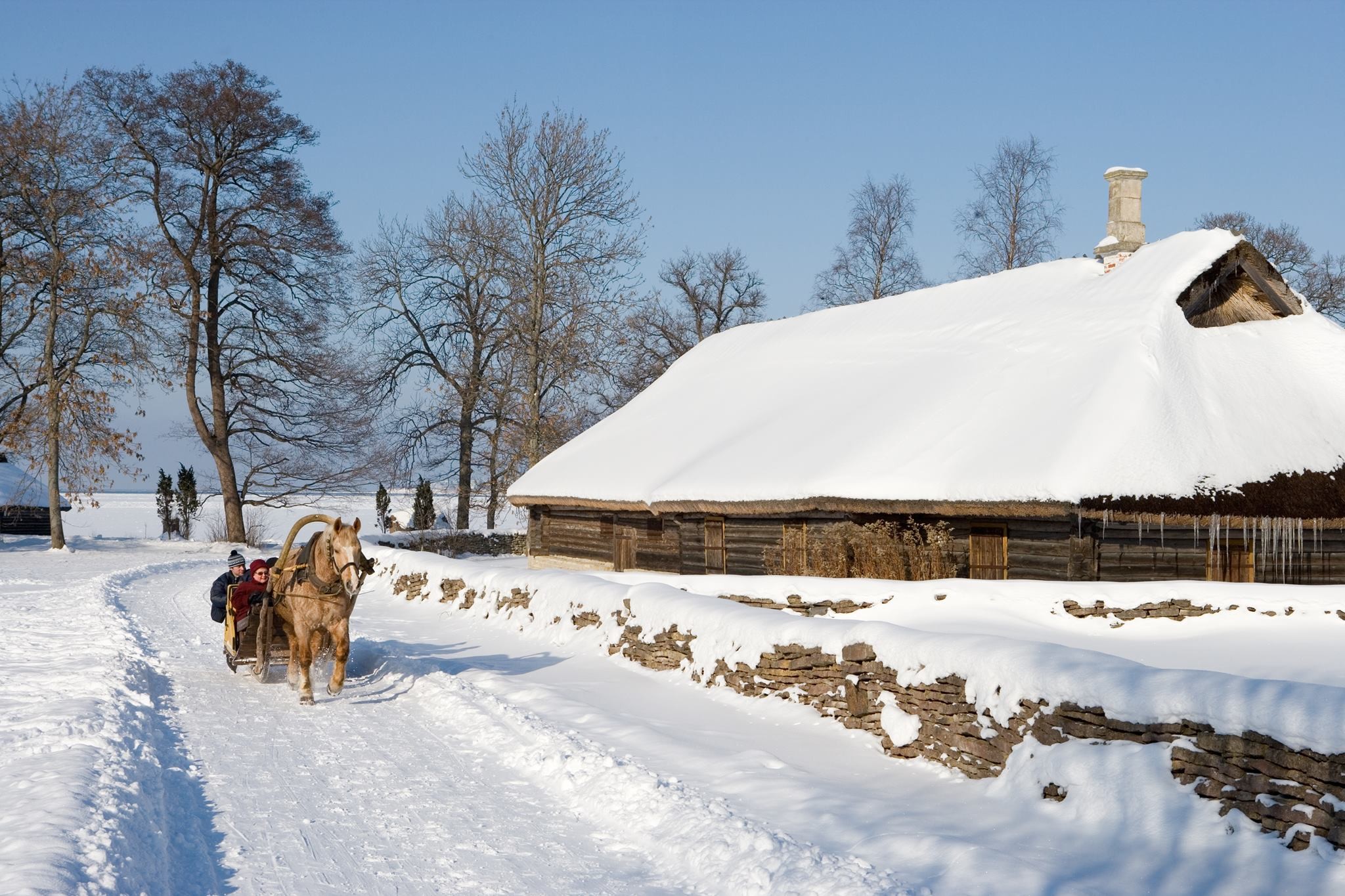 The Christmas season, in connection with its special tasks and bans for different work, began on St Thomas’s Day (the first day of the winter solstice), following the three to four-week preparation period. During winter, the peasantry had enough time to celebrate long holidays. Pigs were slaughtered and ale was brewed in preparation for St Thomas’s Day. Some activities like grinding in the mill, spinning, quilling and horse-driving were banned because they were noisy and could disturb the good ghosts.

Christmas Eve and Christmas Night were the most sacred times of the season, often characterised by fortune telling. With the help of the stars and the frost, the weather for the coming year was predicted. Christmas food had to remain on the table (as part of the cult of the ancestors) and the fire burning in the fireplace (probably as sun worship) for the whole night. It was believed that both good and bad forces were on the move on Christmas Night and that ancestors would visit the house. The next year’s harvest was also predicted. 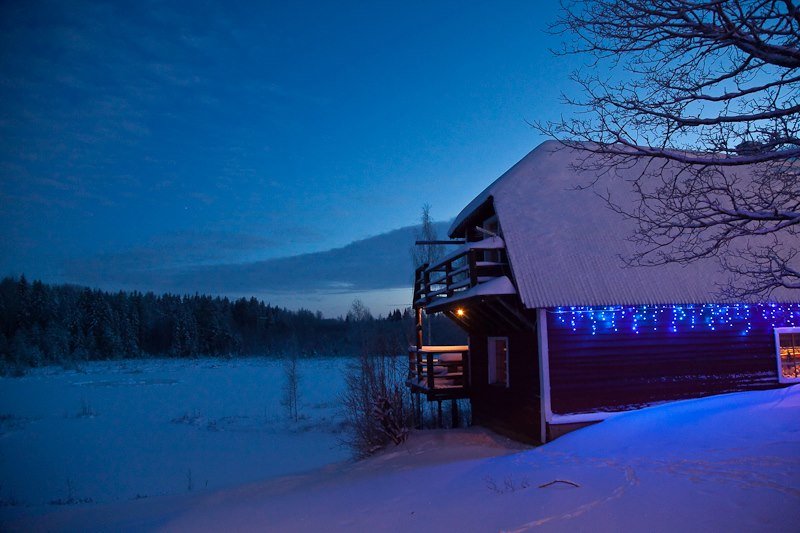 In terms of Christmas and New Year’s Eve traditions, the habit of taking a bath in the sauna is a very old and important tradition. It was a custom to go to the sauna on Christmas Eve after preparing the house for the festive evening celebrations. Going to a steam bath was widespread all over the country and was similar to the same habit on Midsummer’s Eve.

The sauna was traditionally visited before the Christmas Eve service in the local village church. As the first Christmas surprise, the children were offered festive new clothes and shoes to dress in for the evening church service.

In Estonia, Santa Claus usually brings gifts on the night of 24 December. One of the most important and widespread Estonian peasant traditions, as in other Northern and Central European countries, was the habit of bringing home Christmas straw. Although connected with the biblical legend of Jesus Christ’s birth-story, the tradition of Christmas straw might even be of pre-Christian pagan origin. In Estonia, straw (in south Estonia sometimes also hay) was taken to the house for the whole festive season. It became a playground for the children.

Besides bringing straw to the house, the tradition of making special Christmas crowns, imitating church chandeliers, was widespread among the Estonians and their neighbours. The habit came to Estonia probably from Western and Southern Finland and was, at first, popular mostly among the local Swedish-speaking population, especially on the island of Vormsi where the inhabitants maintained close contact with their kinsmen in Sweden and Finland.

The tradition of making Christmas crowns and bringing straw into the house disappeared around the turn of the century and was replaced by other Christmas symbols. There was a revival of the old tradition in the 1970s when it became very popular to make Christmas crowns again. 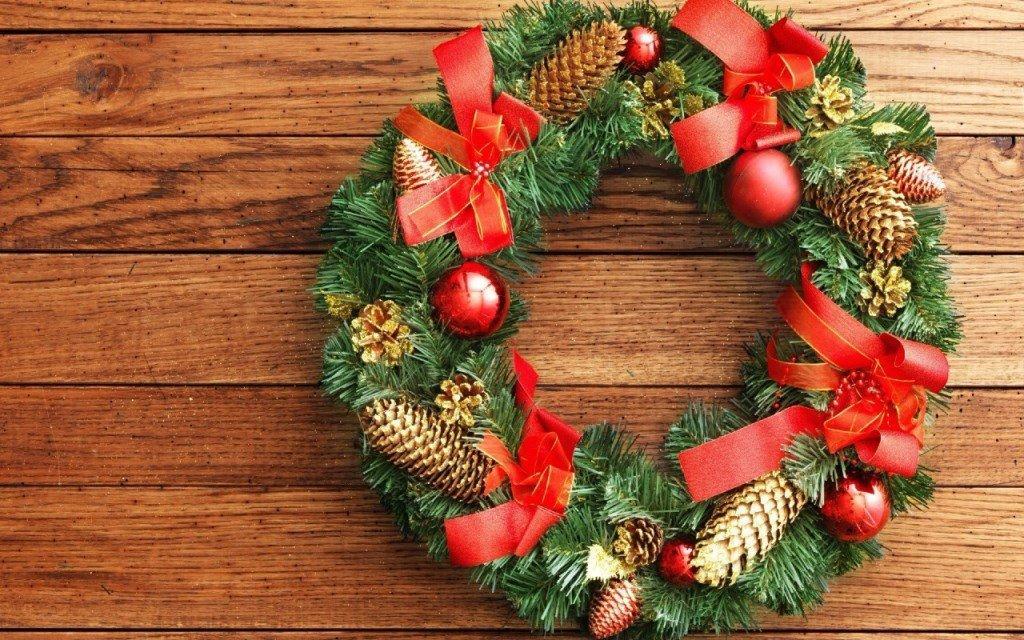 As compared with other Estonian Christmas symbols, the Christmas tree tradition is rather recent and came from Germanic culture in the middle of the 19th century. In towns, the habit of having a Christmas tree at home was adopted by Estonians from the local German-speaking population. The tradition was spread to the countryside by the local Baltic-German aristocracy. They organised special Christmas parties with presents for their servants and children in their manor-houses. 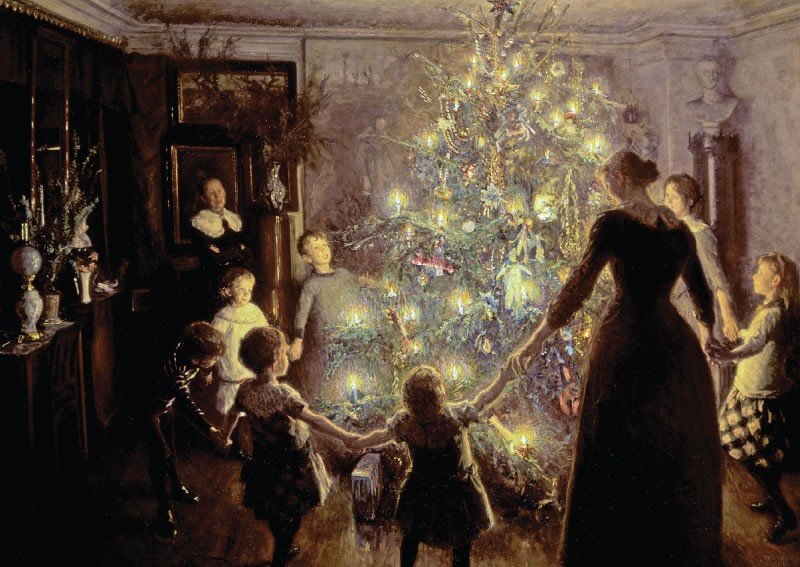 Soon the habit of having Christmas trees in schools, churches and farmhouses (together with Christmas straw) became very popular. The Christmas tree was always an evergreen fir-tree and only in a few places, where there was lack of woods (eg on the island of Kihnu), the fir-tree was replaced by a pine. The Christmas tree was decorated in a simple manner with primitive small toys and sweets and later candles were lit on the tree.

The tradition of Santa Claus bringing Christmas presents is also relatively new, but has become customary.

The traditional Estonian Christmas food is pork with sauerkraut and blood sausage. It was customary to eat large meals on Christmas Eve and Christmas Night. To have plenty of Christmas food at home symbolically meant enough food for the whole coming year. 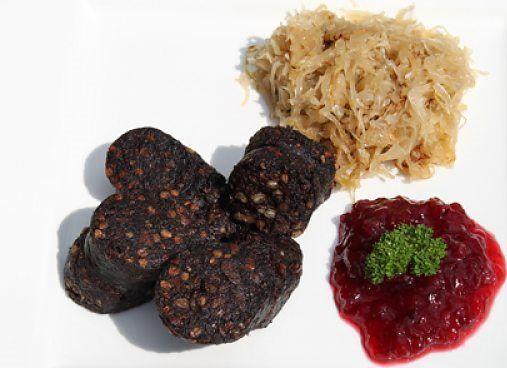 According to an old tradition, seven to twelve different meals were served on Christmas Night. A special Christmas bread called Christmas barrow was baked. On the holy night, the domestic animals in the barn were also offered Christmas bread. Home-brewed ale and mead were the most popular Christmas drinks. The Christmas feast often differed between inland agricultural areas and fishing communities on the coast.

Christmas Eve and Christmas Day were traditionally domestic holidays. From 26 December on, relatives, friends and neighbours were visited. On the night of 27 December, Christmas was “sent off”. It was also popular to visit the local tavern and have fun on that day. The last days of the year till New Year’s Eve were known as “half-holidays,” when hard work was still avoided. People visited each other and mostly had fun.

Christmas as an official holiday was banned during the Soviet occupation. The traditional Christmas season was limited to New Year’s Eve and New Year’s Day celebrations. Despite these restrictions, Christmas was celebrated unofficially, since a great number of Estonians participated in Christmas Eve church services. 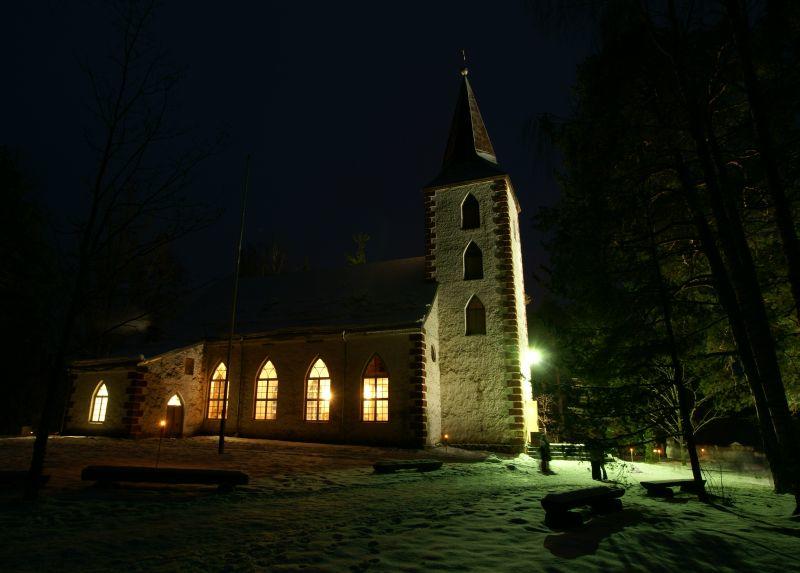 Attending the Christmas services was followed by the custom of lighting candles on the graves of relatives. This became a peaceful nation-wide protest against Soviet ideology and atheist propaganda in general. Christmas Day itself, an ordinary workday, was celebrated at home in private with family and close friends.

Due to the political changes in late 1980s, Christmas, the Christmas tree and Santa Claus regained public recognition. Some years later, after regaining independence, Christmas became an official holiday again. 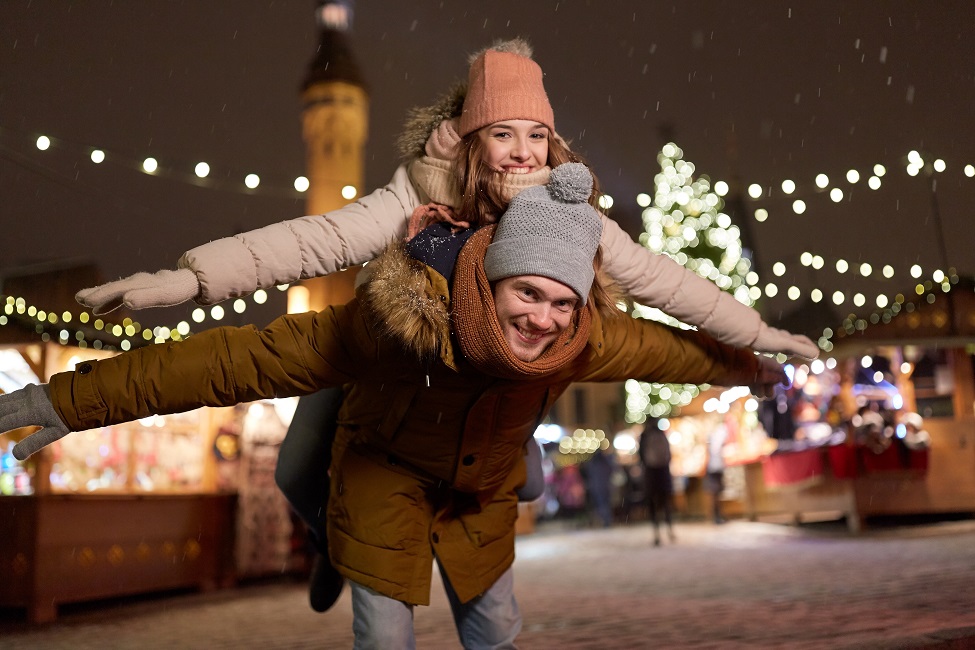 Some new, mainly Finnish and Scandinavian features have become obvious alongside ancient Estonian Christmas traditions. One of the most popular of them is the habit of celebrating pre-Christmas or little Christmas during the first weeks of December. Pre-Christmas with food and drinks, mostly with mulled wine, is celebrated among colleagues in offices and other places.

Each year on 24 December, the mayor of Tallinn declares Christmas Peace from the balcony of the medieval city hall. Declaring Christmas Peace is a 350-year-old tradition in Estonia that began in the seventeenth century by the order of Queen Kristina of Sweden.I I

* Please note that this article was originally published on 24 December 2013 and amended on 23 December 2016, 18 December 2017 and 23 December 2018. Cover: An Estonian girl with her puppies. The image is illustrative. Photo by Paul Meiesaar.

6 thoughts on “Christmas traditions in Estonia”