The small Estonian town of Rakvere stood out last year by erecting one of the most distinctive Christmas trees in the world at the town’s square. This year, the town is attempting to repeat the same feat.

Unlike the usual custom of harvesting forests for the traditional town square decoration, the local council took an innovative approach. Designed by Teet Suur, the council’s cultural arts manager, the Rakvere Christmas tree last year was built by twelve local students who used waste wood from the local mills.

This year, devised again by Suur, recycled windows were used. The tree took two days to erect, with the help of students from Rakvere Vocational School, and is 12 metres high. Comprising 121 coloured windows in total, the result is even braver than last year. 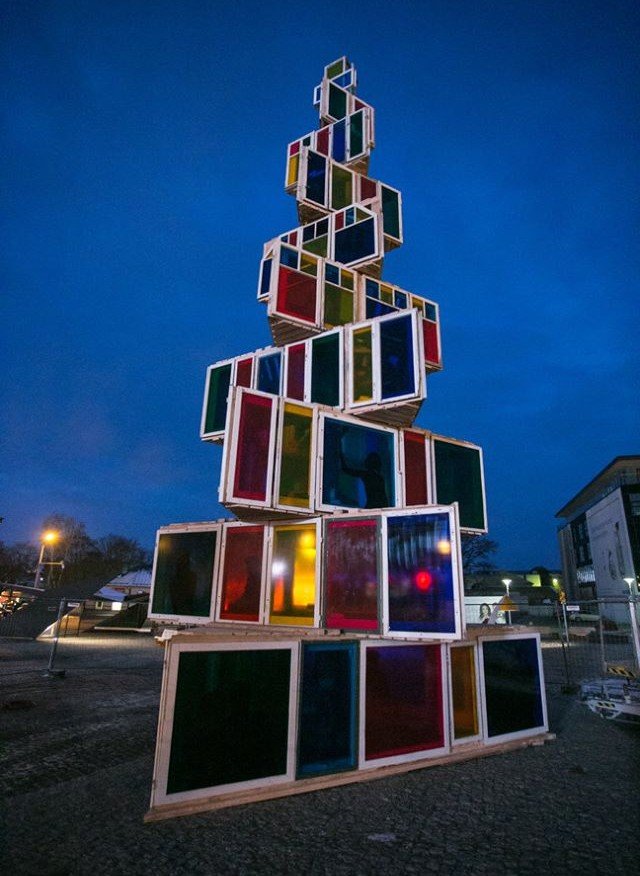 While the last year’s attempt first polarised opinions in the town – one local citizen went as far as to start a Facebook campaign, collecting money to buy a “proper tree” instead – the town’s citizens are likely to be more supportive this time, based on last year’s success. The Huffington Post included it among “The Most Over-The-Top Christmas Trees Of 2014“, encouraging its readers to “check out these amazing trees from around the world that have captured our imaginations this year”. The others say it is a good idea to save a natural tree in a forest.

Teet Suur, until recently a farmer who discovered his creative talents and graduated from an art school as a sculptor just few years ago, is amused. He said that every visitor to town, as well as local inhabitants, should feel that Rakvere, a home for 15,000 people, is a lively and creative place where people could enjoy “artistic pleasure”. According to the 42-year old, it is precisely his task as the man in charge of local arts affairs, to challenge the stereotypes and make people think.

1 thought on “PICTURES: Rakvere surprises with a Christmas tree, again…”