The Shetland Islands are the northern-most part of the United Kingdom. A group of islands situated between the Atlantic and the North Sea, they are a windy, cold and lonely place. For one Estonian fisherman, they proved to be quite terrifying.*

The waters around the Shetland Islands are well known for the abundance of fish and the Soviet factory ship Ukrania, and its fleet of assorted trawlers and motorboats were on a voyage they had completed many times before. The calm and clear night of 25 June 1958, however, was a night like no other. It was the night Erich Teayn, an Estonian crewman on the Ukrania, made his bid for freedom.

Using a commandeered motorboat, one of the several accompanying the Ukrania, he powered towards the coast of the Shetland Islands. He had realised that his journey wouldn’t be easy and might even be dangerous, but he hadn’t counted on 30 of his Russian crew-mates giving chase, hoping to foil his escape. In choosing a faster boat, he managed to land slightly ahead of his pursuers, on the ragged coast near the small village of Walls, West Shetland. 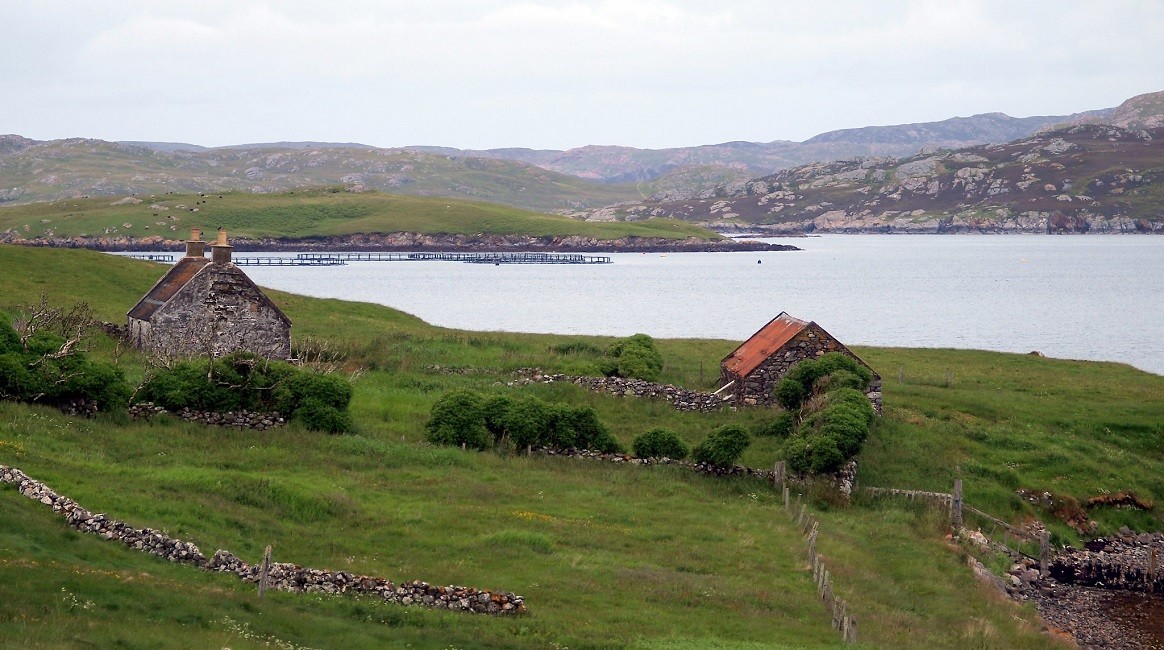 Teayn spent five hours trekking through bare and treeless terrain in the late daylight with the Russian crew scouring the area, looking for any trace of their former colleague. He eventually stumbled upon the cottage of a local crofter, David Fraser, and his son. Communication was difficult as Teayn spoke no English and Fraser spoke no Estonian (nor Russian), but both had learned piecemeal German. Teayn managed to explain that he was fleeing Russian fishermen and that a search-party had been dispatched to locate him. Fraser hid the terrified Estonian well out of sight within his small cottage, cooked him a meal and alerted the police by telephone.

Meanwhile, a local coastguard, James Thomson, had been observing events with his binoculars and reported to his superiors in Lerwick, the largest town in Shetland, that a large group of Russians had come ashore, travelled several miles inland and he was baffled (and slightly annoyed) as to why. His superiors alerted the police, who had by now received Fraser’s call, and dispatched two sergeants to investigate.

At the same time, the (all non-English speaking) Russians were trying to obtain information from local residents as to Teayn’s whereabouts. Dr Hepburn, the local GP, told The Guardian that two Russians had knocked on his door and tried to communicate using sign language, adding that “it took rather a long time to find out what they wanted”. The police in Lerwick were already worried, as the parish of Wells was small and with a population of under 1,000, it was feared the Russians might start to forcibly enter and search properties.

Similarly, it was a nervous wait for Teayn and his hosts, as at one point the Russians had passed within 50 yards of Fraser’s cottage. By the time the police arrived, after a treacherous drive on poor roads, it was nearly 2 AM and the Russians had given up their search and returned to their vessels. The two police sergeants arrested Teayn under the Aliens Act (he was an illegal immigrant, after all) and took him back to Lerwick, where he was placed in custody.

The next day, the three senior Russian commanders of the fishing fleet landed in Lerwick to demand Teayn’s transfer to their custody. The Provost and senior police officer were both on leave and despite their apparent politeness and friendly manner, the police refused them all access to Teayn.

By now, news of the affair had reached a concerned Home Office in London. Leader of the Liberal Party and Shetland MP, Jo Grimond, asked Home Secretary, Rab Butler, about the incident in the House of Commons; Butler said that “every consideration” would be given to Teayn’s claim for asylum and confirmed that the 30 Russians who pursued him did so illegally and had now “gone away”.

On 27 June, two days after he fled the Ukrania, it was decided that Teayn should be taken to Edinburgh to be questioned by senior immigration officials. He travelled under heavy security and spent most of the long boat ride locked in a cabin with one of the police sergeants who initially came to his rescue on the 25th. 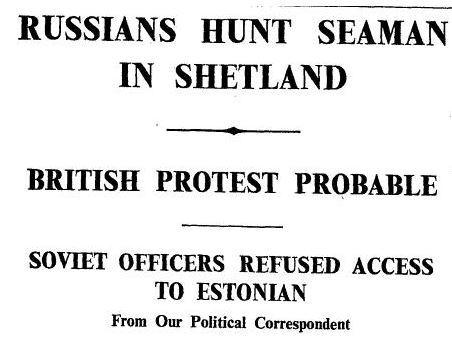 Alerted by the Grimond’s question in the House of Commons, the national press had begun to follow the story and pictures of Teayn, hidden under a sheet, embarking and disembarking the boat were featured in newspapers and on the television news; some of those who had met the Russian search party were interviewed by the BBC. Crowds of local residents flocked to the pier and dockside to watch the commotion. It was also at this time it transpired that Teayn had left behind a wife and young daughter in Estonia.

Three Russian diplomats arrived on 27 June in Lerwick, Shetland, to interview the officers in charge of the fishing fleet. Despite it being made known that local officials would be happy to meet them, they declined and remained aloof. According to port officials, they even declined an offer of a berth near a jetty and preferred to anchor at a distance from the town.

Over the weekend of 28 – 29 June, the British government increased the diplomatic pressure by sending a formal note of protest to the Soviet Embassy in London, detailing how they took “a grave view of the action of these seamen in landing on British territory and of their subsequent conduct there. Had they apprehended by force the person for whom they were searching, a flagrant violation of the law would have occurred.” The Soviets were asked to issue instructions to the commanders of all Soviet vessels that would be entering British waters to ensure that such an event would never reoccur. 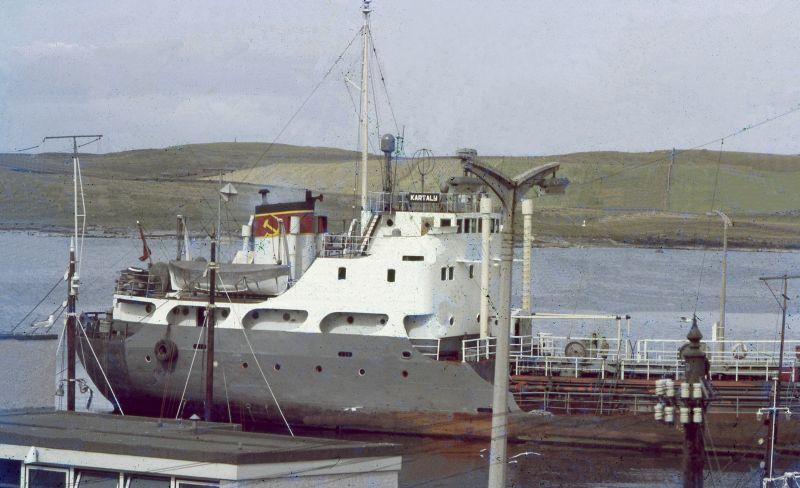 The Soviets meanwhile tried to have Teayn extradited – but on 15 July, it was announced in a written answer to the House of Commons that their request had been refused. Two days later he was formally granted asylum by the British government and travelled by train, as a free man, to King’s Cross station in London, accompanied by Dr Jaak Taul, chairman of the Estonian Lutheran Church of Great Britain. The decision to grant him asylum was announced in the House of Commons by an under-secretary of state from the Home Office, to much cheering and waves of order paper in delight.

Unfortunately, it is here that the story goes cold. The last information we know of Erich Teayn is from a brief paragraph taken from the home news section of The Times of 31 July 1958, entitled “ESTONIAN SEEKING WORK”. It details how he had travelled to Shipley, near Bradford in Yorkshire, to stay with an Estonian family and was indeed looking for work. I would love to know if he found it…**

Cover: A Soviet fishing vessel near Shetland (the image is illustrative/photos by Shetlopedia.com & Chris Glew). * Please note that this article was first published on 9 May 2013 and lightly edited on 17 April 2018. ** Erich Teayn lived a long life in Leicester and died in the city on 14 April 2016.

Chris Glew is Estonian World's London Editor. Chris has also written for other international media outlets, as well as for Estonia's Postimees, Eesti Päevaleht and Delfi.