When one of the best and oldest schools in Estonia, the Gustav Adolf Grammar School, is attempting to glamorise the Soviet occupation, it’s a cause for major concern.

One would expect that on 10 March – the anniversary of the Soviet Air Force’s bombing of Tallinn in 1944 – any reputable institution in Estonia would respect the memory of those who lost their lives because of the Soviet Union. Sadly, this is not the case.

On 10 March, one of the most highly distinguished schools in the country, the Gustav Adolf Grammar School, is organising a concert that is dedicated to the “top estrada music of the Soviet Union”. In the words of the school’s director, “it’s a gift to Russia and to all those people who remember the Soviet period well”.

To those not familiar with the term “estrada”, let us explain.

As traditional popular music was the main official direction of the Soviet estrada, it was subjected to a particularly rigorous censorship. Usually the songs were composed by members of the union of composers and the lyrics were written by poets that the communist authorities trusted. The еstrada songs were mostly about love or about patriotism and ideology – nothing was left to chance.

In other words, the music that one of the most successful schools in Estonia is going to voluntarily celebrate on the anniversary of the Soviet aerial bombardment of the country’s capital, was itself imposed on the artists; there was very limited creative freedom involved, especially lyrically.

A brainchild of the school’s eccentric principal, Hendrik Agur (known in Estonia also for his love of Soviet-made cars, including a military jeep, the type of which formed the backbone of the occupying Soviet Army vehicle fleet), the concert promises a nostalgia trip to the 1970s and 1980s communist period, with the schoolchildren performing the estrada music of the era.

“But today’s youth, whose imagination of the Soviet Union has remained more or less blurred, push their thumbs into a stagnant, yet stormy musical epicentre, and bring to the stage the top estrada of the Soviet Union – the songs that once sounded every day on the ears of people in the sixth of the planet. In fact, these were superbly composed and performed Soviet top-estrada, the listening of which in 2018 will take on a completely new meaning,” the event advertisement added.

And here’s where the issues start. It is fair and square if a bunch of middle-aged, nostalgia-ridden men decide to pack their gear and play a song or two of the lame Soviet-era pop in the venue of their choosing – provided they get a permission. Estonia is a free country, after all.

It’s another matter, however, if a school principal imposes the communist-era repertoire to unsuspecting schoolchildren, especially if it’s done without providing a proper context – with warts and all.

During the Soviet occupation, the estrada was not the only pop music available in Estonia. Albeit with operating with difficulties – under the watchful eyes of the authorities and the KGB – there were also Beatlesque songwriters, psychedelic rock musicians, even punk rockers. There were even those who dared to create compositions and write lyrics that was distinctively unique to Estonia.

Then, there’s a beauty of Russian culture itself – from classical composers, such as Tchaikovsky and Shostakovich, to traditional choral music. Yet, out of all options available, the principal of the Gustav Adolf Grammar School has chosen the Soviet songs for the kids to sing and perform.

But the biggest issue is not the songs – after all, Estonian radio stations play many of the Soviet-era creations daily. The most concerning issue here is the use of the Soviet symbols and propaganda posters in a sort of way that portray the era almost as glamorous and cool. The Soviet hammer and sickle and the red star are all over the place, not to mention the depiction of the Soviet state borders that included the occupied territory of Estonia. Overnight, the Gustav Adolf Grammar School has validated the Soviet occupation, portraying it as something completely normal, with the songs to be proud of.

The school’s use of Soviet symbols will effectively legitimise them across Estonia and will therefore have the wider implications. The next time a Russian school director in Kohtla-Järve or Narva uses them, no one can say a word.

What would the Jews say if one of their best schools spent their resources organising a concert in Tel Aviv, honouring the songs written in the Nazi Germany? All the while portraying large Nazi symbols and posters, without mentioning the fact that the Nazis exterminated six million of them? On top of that, say the concert took place on the anniversary of Kristallnacht (a pogrom against Jews throughout Nazi Germany on 9-10 November 1938)? The answer is simple – it wouldn’t happen in Israel.

This publication is seriously concerned about the creeping normalisation of Soviet occupation that is gradually taking hold in Estonia. This includes the avoidance of the word “occupation” by some politicians and some members of the media, ignoring the events dedicated to the memory of those who suffered under the occupation and glamorising the Soviet era. The latest incident is one of the most shocking still – because it involves children who cannot yet speak for themselves and who in many cases don’t comprehend the historical tragedy. 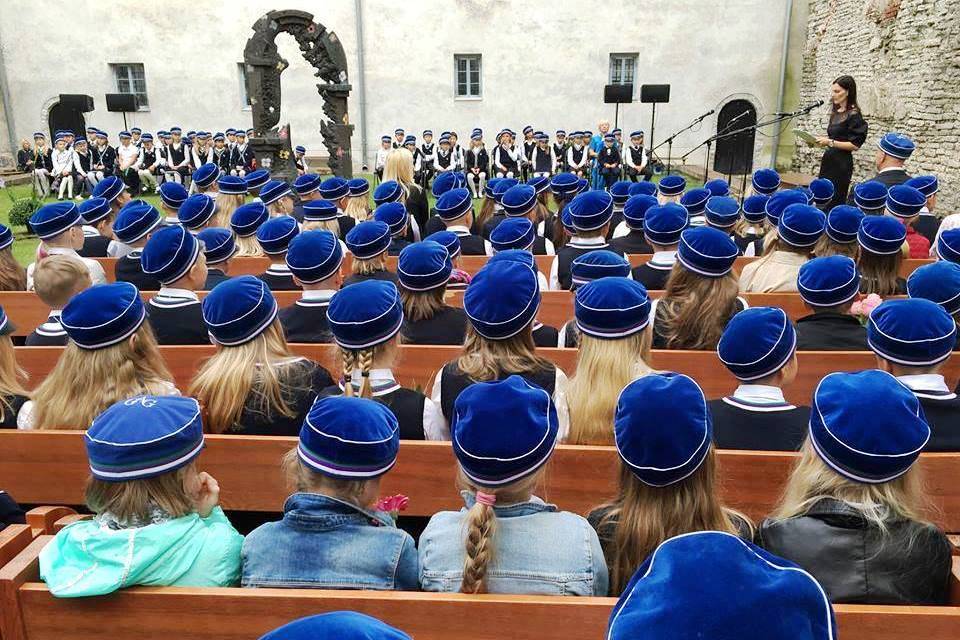 When the Swedish king, Gustavus Adolphus, established the Gustav Adolf Grammar School (then called the Reval Gymnasium) in 1631, it is doubtful he foresaw a day in which the schoolchildren of a free country would honour a tyrannical [Soviet] regime that was responsible for the loss of millions of lives. The current director of the Gustav Adolf Grammar School has a lot to answer for. And so do the people who don’t see any issue in glamorising the Soviet symbols.

Cover: The most concerning issue is the use of the Soviet symbols and propaganda posters to advertise the concert; all done in a sort of way that portray the era almost as glamorous and cool.

5 thoughts on “Editorial: Attempts to normalise the Soviet occupation of Estonia are deplorable”