Joel Lindpere is an Estonian professional footballer who currently plays for Chicago Fire in Major League Soccer in the US. Ave Maria Blithe caught up with Lindpere for a little cheeky chat.

Just the other day I was reflecting about growing up a tomboy and musing how I enjoy being the only girl in the family of four. But the fact, that I find myself writing yet another sports themed article is quite unexpected. When did I become Bob Costas? If anything, I should be Annie Leibovitz.  Or Annie Lennox.

I have to admit, I know nothing about sports. As far as stats, strategies and team affiliations. What I do know, is that sports are largely played by people. And people interest me. Both as subjects in front of my lens, when I can hide behind the camera and peer into their soul. And equally as much when I overcome my mandatory Estonian shyness and ask them point blank questions. This time the subject is an American-based Estonian soccer star Joel Lindpere, who most graciously agreed to answer some of my inquiries.

In a global context, soccer is the most popular sport, riling up hooligans in Manchester just as passionately as gauchos of Argentina. During the recent years, Estonia has gotten in the game. Literally. Mart Poom was signed as a goalie by Arsenal in August 2005 and became the first Estonian to receive a Champions League runners-up medal.

I ask Joel, if there is higher than average genetic disposition for Estonians to be great soccer players, much like Estonia revels in producing most super models per capita. Joel replies “We should actually have many more of our talented soccer players on the international arena, but since Estonia is such a small country and sadly still quite unknown, we are not taken seriously. On the plus side, more and more teams form in Estonia every year, the popularity of the sport keeps growing among young Estonians and as the number one sport in the world, more and more games get broadcasted on TV. So the progress is very positive.”

Even so, sounds like Joel has his work cut out for him, proving our prowess. An Estonian sports fan is a fickle creature. As long as you bring Estonia fame and fortune, the average couch potato is proud and shouts “Estonia rules!” God forbid the tide temporarily turns, he gets nasty and mocks his countryman for deserting his homeland, and posts envious comments about the foreign money he is making. Oh well, the favourite meal of an Estonian is another Estonian, as the saying goes. Therefore I salute all my fellow-expats who dared to venture out of the comfort of their familiar village and are now trying to prove themselves in the big world.

“After my very first practice!” he is quite resolute. This bull-headed determination and focusing on a single goal, pun intended, is a hallmark of all achievers. You know early on what you want, you figure out what you need to do to get there and you go for it.

But it is not all soccer twenty-four-seven for Joel, everyone needs to relax. Joel enjoys following other sports like hockey, NFL and NBA. He is also an avid swimmer and poker player.

Joel Lindpere signed with Major League soccer club New York Red Bulls on 25 January 2010. He scored his first goal for the club against Santos FC on 20 March 2010, becoming the first player to score a goal at the new Red Bull Arena. On 4 January 2013 Lindpere was traded to Chicago Fire in exchange for an international roster spot. 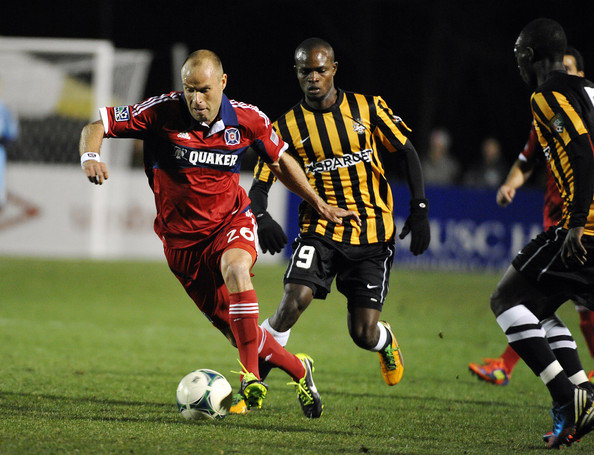 So, having recently moved from New York City to Chicago, I wonder which town he prefers. “NYC is the greatest city in the world that literally never sleeps. During my time there I got to know most of its nooks and crannies very well. Chicago is still new to me, but so far I enjoy this clean and peaceful city and look forward to discovering it. I like them both.”

America being the melting pot that it is, one can’t avoid but naming discovering different cultures and cuisines as a pleasant pass-time.

“With all this international jet-setting, how often do you manage to visit Estonia?” I pester him.

“As often as I possibly can, at least 3-4 times a year,” Joel replies.

Now I feel bad, I only manage about once a year to get back to both of our hometown Tallinn. And even in hanging out with fellow Estonians, Joel has an advantage. I inquire where and how often he gets to meet our countrymen in America. “Every day!” he replies cheekily, alluding to his family.

I wonder how Joel celebrates the important days in the Estonian calendar, such as Midsummer Eve, while in the US. “BBQ and Estonian beer, of course!”

My last question to Joel is very girly, even for a former tomboy. “Joel. Let’s be honest. You are a good-looking dude. When can we expect you to model underpants like David Beckham?”

“Beckham is Beckham,” smirks Joel and leaves the possibilities open. Advertisers, when you sign him to hawk boxer-briefs, I expect a 10% finder’s fee.