You know you have it made once Chuck Norris style jokes begin to circulate: “Margus Hunt isn’t sleeping, he is waiting.”Or, “How many sit-ups can Margus Hunt do? All of them.“

Even his name, which means “wolf” in Estonian, lends itself to many metaphors. Recently, Margus Hunt himself started using the English pronunciation of his name, and being a defensive end, he will hunt you down. Or deliver one of his infamous eastern blocks… 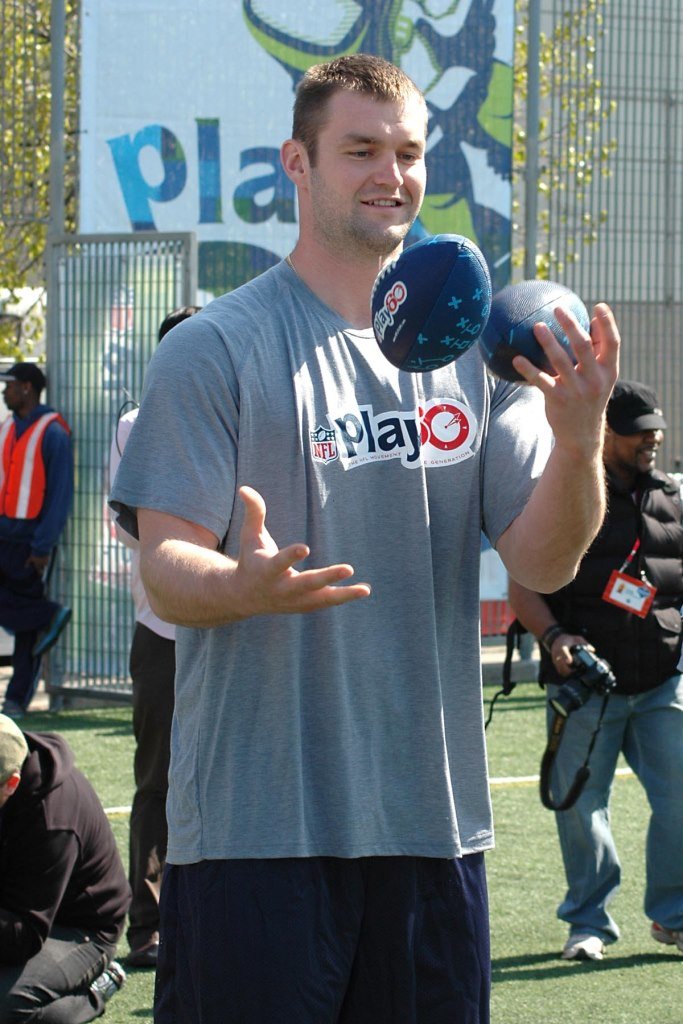 With the 2013 Cincinnati Bengals draft and overall 53rd pick, history has been made and a new hero was born. With only two other Estonians before him in the American National Football League (NFL), the nation is represented well. It is an interesting paradox that to the NFL and the rest of America, Estonia is just as obscure as American football is to Estonia. But perhaps Hunt can bring enthusiasm and interest to this sport just like Baruto did to sumo wrestling and with his career, more people could be inspired to look up Estonia on the map – with a magnifying glass.

Many in Estonia still respond to his career choice with mixed emotions, prompting Hunt to declare publicly that he hopes Estonians forgive him for not sticking with discus and shot put, two of the least popular summer Olympic fields. Actually, it was not entirely his choice. Southern Methodist University in Texas simply did not offer those two programs and in order to stay in school and earn his degree, Hunt switched to football, having never played the game before and resorting to playing hours of a video game called Madden to actually learn the rules of the game.

As many of you might know, football in America is a religion, creme de la creme of all sports, to which the brightest stars of other fields get recruited. A burly two-ton wrestler becomes a lineman, a great football (the normal kind) player becomes a kicker and someone small but agile and superfast on his feet becomes a running back. It was inevitable that SMU coaches would notice the 6’8’’  Estonian giant with an impressive physique who is still incredibly fast and super resilient. Best of all, being new to the game, he was a blank canvas ready to be moulded to fit the game, as he himself admits. 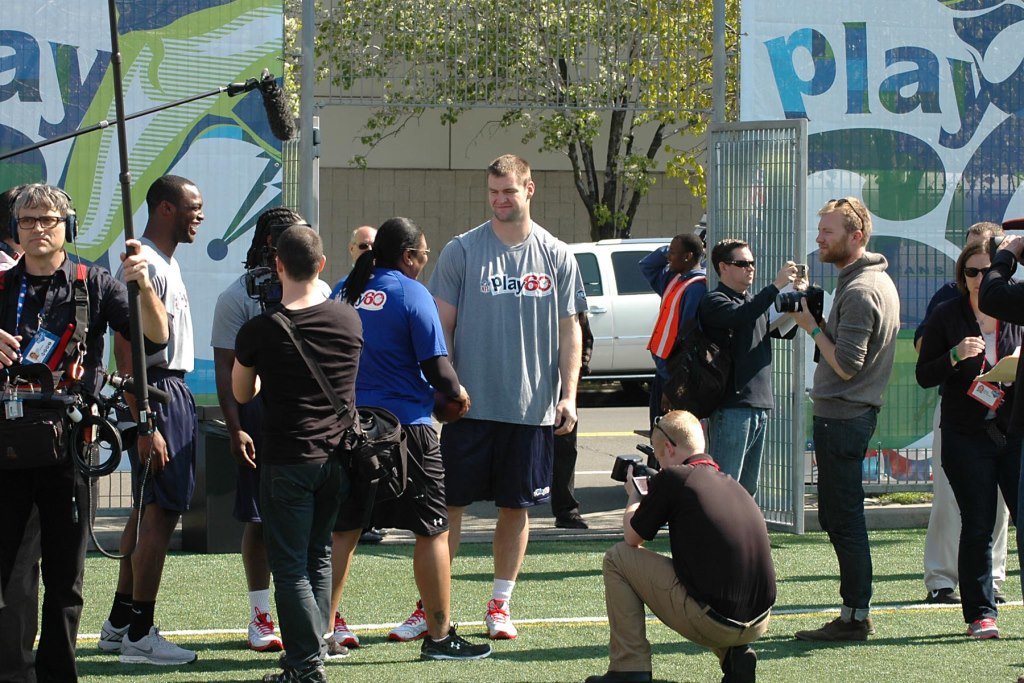 I meet Margus in New York City on 25 April, the first day of the official 2013 draft. Chelsea Pier football field glistens in the platinum sun peeking from behind the Empire State Building. The 2013 draft hopefuls play football with an exclusive selection of the area kids. Margus towers over them. Not only the half-pint, but all the other players. I holler a loud Estonian “Tere Margus!” (hello, Margus) and since we already know each other through social media, he is delighted to chat with me in our own exotic language. After a few minutes, my neck hurts, looking up to him, and at 5’8 I’m no shortie! 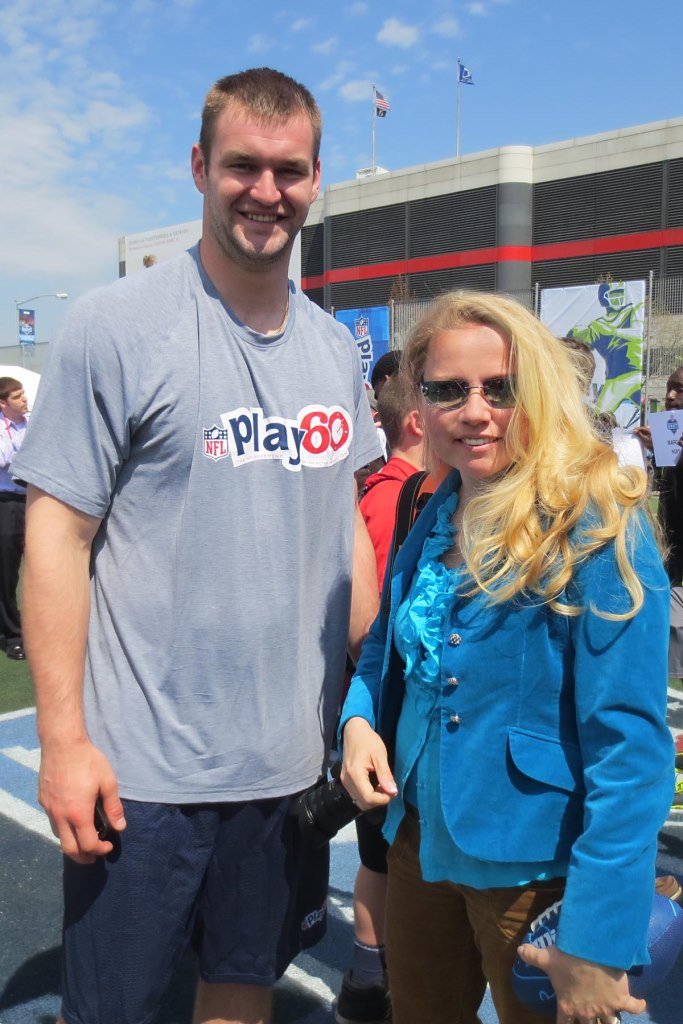 Neither one of us could imagine a few years ago that we would be here talking about football. Just like many other snobby Europeans, I considered American football a brutal clashing into each other, senseless and boring, for the game seemed to stand still most of the time, with only sudden bursts of energy. It took meeting my American husband, an ex-player, to explain the rules and object of the game.

Turns out, football can be quite interesting! It’s is like chess, all about strategy and out-manoeuvring the opponent, played by real life hunks in tight trousers. And the bone-shattering clash of helmets to shoulder pads is downright primal, like two rams butting heads in mating season. What’s not to like? Now I freeze my butt off, cheering on our eight-year-old in his third year of football. “Go low!”

Much like any made-for-TV American fairy tale, Margus Hunt’s saga would write as a quiet country-boy who was bullied as a child and whose family went through periods of poverty. It is no wonder that poor little Margus (as hard as it is to imagine that) could not resist the temptation and ate the entire loaf of bread on the way home from the store. That was the only grocery his mom had money for that week. With a multi-million dollar contract, Margus now has enough money to keep his family in bread and butter indefinitely.