The alarm sounded just after 1 pm last Thursday at Ämari Air Base where the Royal Air Force is stationed to deter Russian aggression in the Baltic States.

900 miles away inside a control room in the German city of Uedem, the staff at NATO’s Combined Air Operations Centre was tracking three unidentified aircraft.

The aircraft had not filed flight plans and two were not “squawking” identification codes, both in violation of international flight procedures.

The RAF’s 140 Expeditionary Air Wing arrived in Estonia three weeks ago with over 140 personnel and four Eurofighter Typhoons to provide Baltic Air Policing on behalf of NATO. They had taken part in a flypast over Estonia’s main towns just one hour earlier to send a clear message that NATO was here to protect the Baltic states and now they would need to prove it. 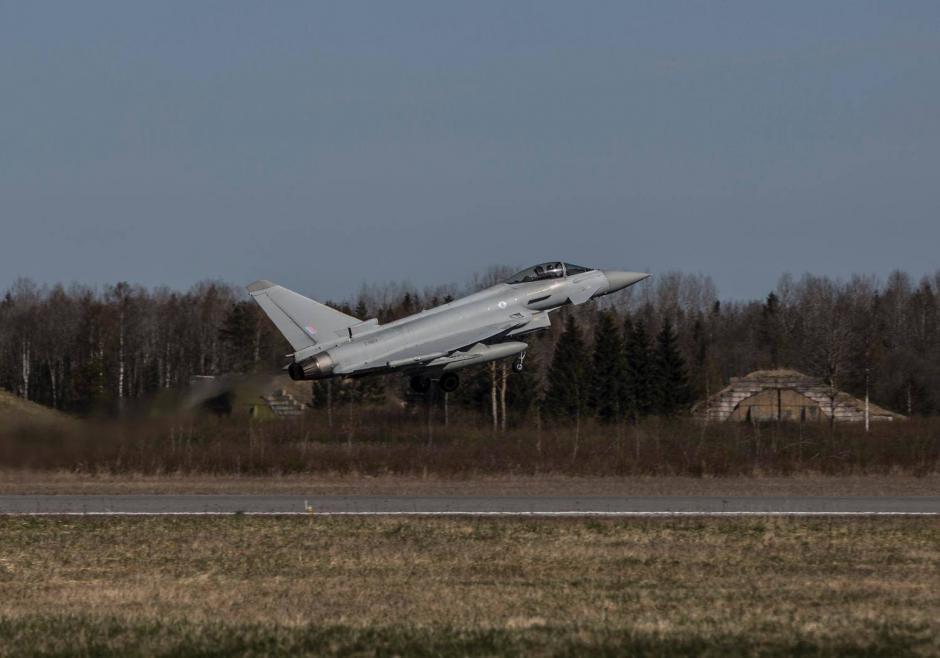 Within minutes of the alarm sounding, two RAF Typhoons were taxiing to the edge of the runway, while Estonia’s air traffic controllers made urgent attempts to establish radio contact with the unidentified aircraft.

The pilots knew they could be in for a long wait on the runway as they are often asked to sit “at slingshot” with their engines running while suspicious activity was monitored.

Air traffic controllers could only establish radio contact with one aircraft, while two were now flying in radio silence among commercial air traffic through Estonia’s flight information region.

NATO command gave the order to intercept and the RAF Typhoons roared down the runway for their first operational task since arriving. They banked a sharp left seconds after the wheels left the ground then flew north west over the forests of Estonia before chasing down the unidentified aircraft above the Baltic Sea. 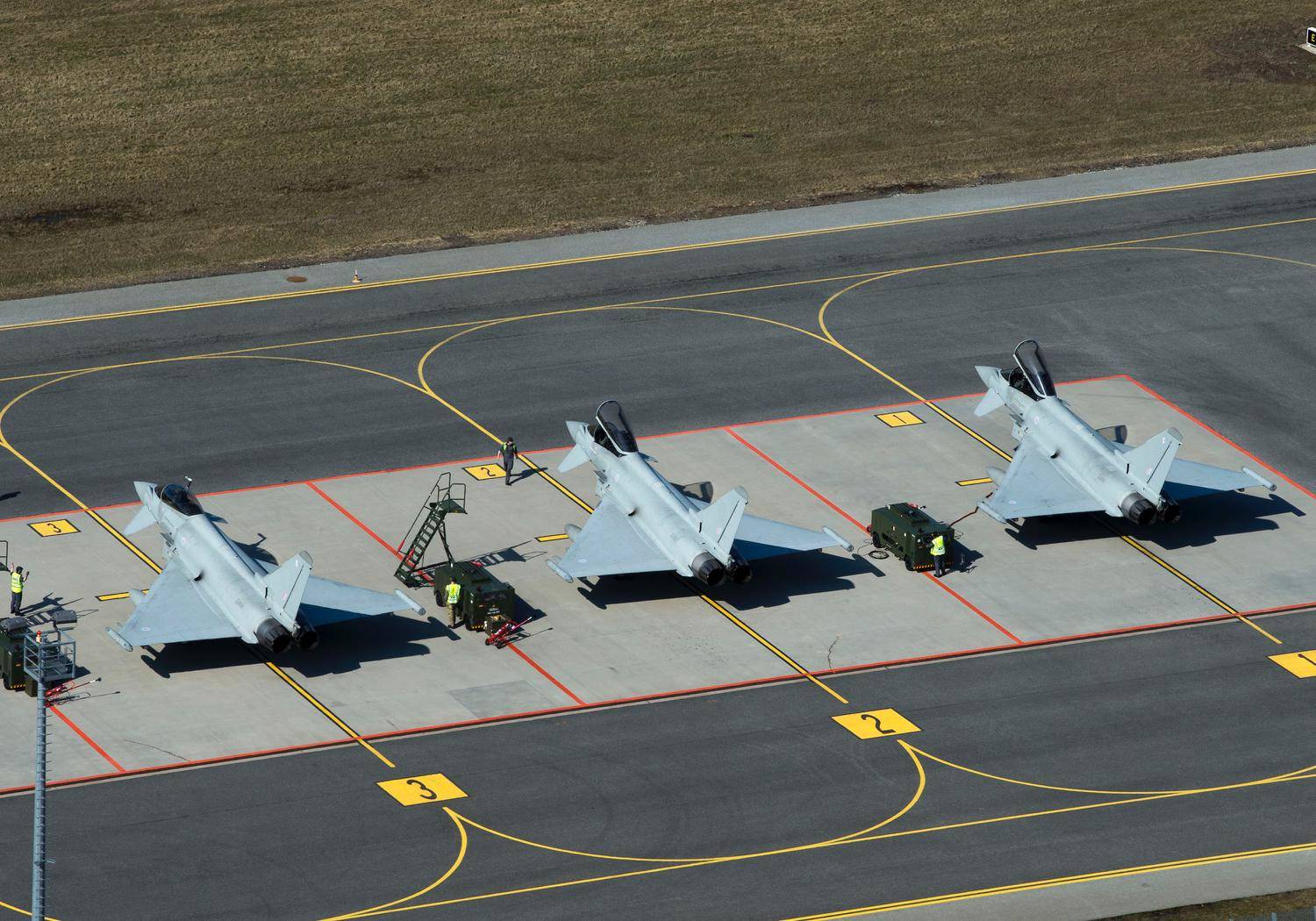 Mere minutes after taking off, the RAF Typhoons pulled up on the left hand side of each aircraft in turn and were close enough to look into the cockpits of what were now identified as an AN-26, an AN-12 and an IL-76, known to NATO as a Curl, a Cub and a Candid. They were all Russian military transport aircraft.

With the identification complete, the aircraft were deemed to pose no immediate threat and the RAF pilots were ordered to shadow instead. The only shooting that took place was with digital cameras provided to RAF pilots to document intercepts.

The RAF Typhoons dropped a mile behind the Russian aerial convoy and together they proceeded west past Estonia before turning south and flying alongside the coast of the Baltic states.

As the convoy approached the flight information region for the Russian enclave of Kalingrad, the RAF peeled off and returned to base in Estonia, completing what was described as “textbook intercepts” by one of the pilots.

The UK defence secretary, Michael Fallon, denounced the incident as “an act of Russian aggression” and added that the instant response of the RAF was a demonstration of the UK’s commitment to NATO’s collective defence.

The incident follows a pattern of behaviour not seen since the height of the Cold War in which Russian aircraft, including fighter jets and bombers, refuse to “squawk and talk” while flying close to NATO airspace and probing weaknesses in their response times.

The Russian government disputes this, however, and repeatedly says all its flights are in accordance with international norms.

Maintaining airspace integrity is a collective responsibility for NATO, which is committed to providing the same level of protection for all members, but the Baltic states of Estonia, Latvia and Lithuania are too small to maintain a quick response capability on their own so the air forces of other member states provide Baltic Air Policing on four month rotations.

The Baltic states have been members of NATO since 2004, but the need to scramble jets in response to Russian aircraft only escalated a decade later when Russia invaded Ukraine in 2014 and relations with the West deteriorated.

The RAF Typhoons used for Baltic Air Policing were developed as part of the Eurofighter programme, originally conceived in 1984 as an agile combat fighter that could chase and outmanoeuvre Russian aircraft in central Europe. They entered service in 2003, but by that point were heavily criticised as outdated Cold War relics that were not suitable for a world in which the threat from Russia had subsided.

That irony is not lost on RAF Wing Commander Gordon Melville, who leads the 140 Expeditionary Air Wing at Ämari. 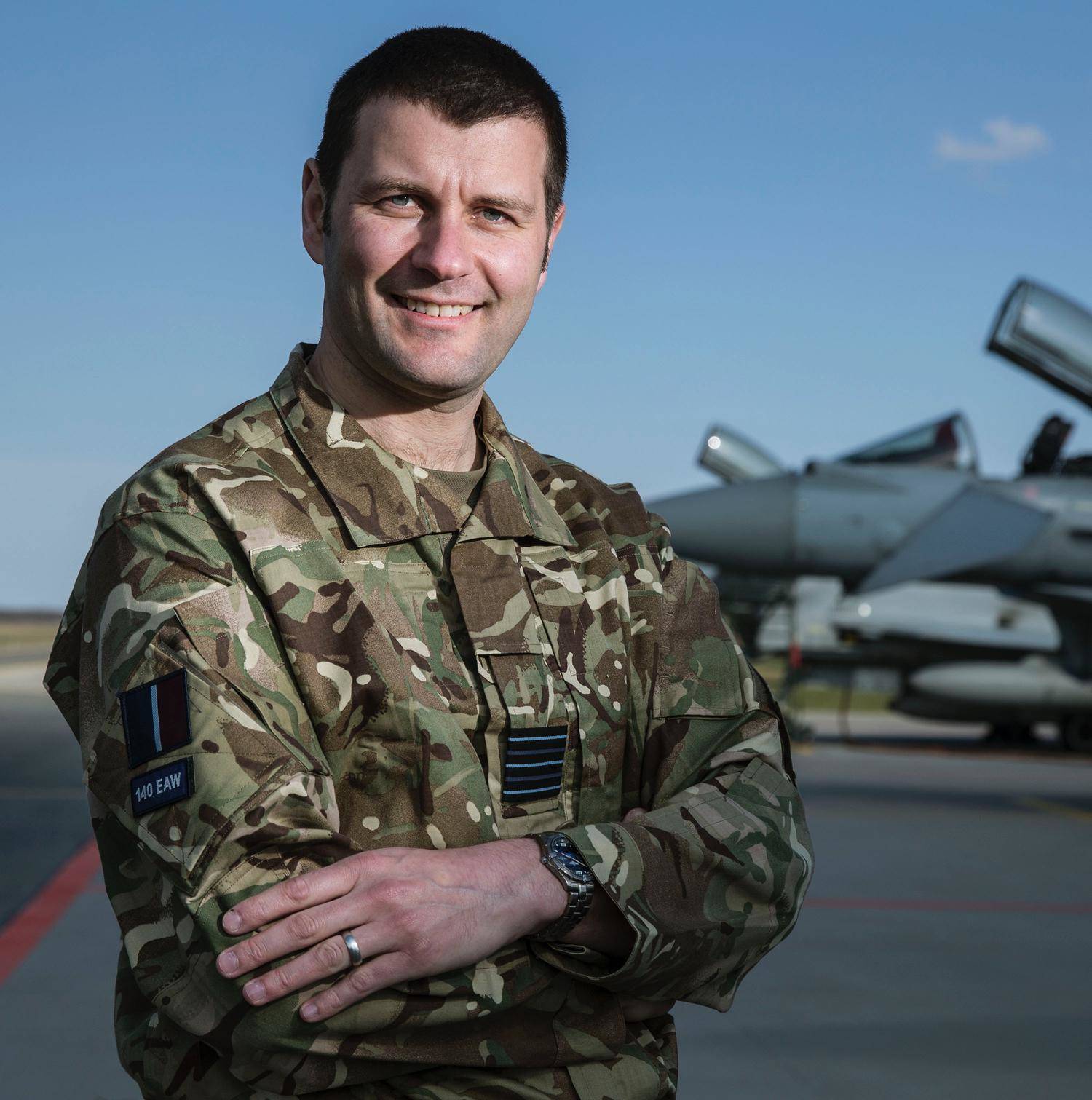 The day after the intercept, Melville is in an office overlooking the runway where routine flights were taking off again. This time the aircraft are turning a sharp right after take-off to join NATO forces participating in Exercise Spring Storm in the south east of Estonia near the border with Russia.

The RAF Typhoons are participating in both simulated ground attack and air defence missions in the annual military exercise, which involves over 6,000 troops from Estonia, as well as the UK and other allies. It serves as the final exam for Estonian soldiers, but has also been described by the US Department of Defense as an opportunity to reassure the region of NATO’s resolve.

“The Typhoons are exceptional and can stay airborne for quite some time,” Melville says. “Everything is measured in minutes to get to the extremities of all airspace in the Baltic region so a pilot could be asleep in bed and then alongside a Russian aircraft less than 15 minutes later.”

“We work very well with all our NATO colleagues to provide 24/7 uninterrupted protection of Baltic airspace. We’ve got Russia to the east and the Russian enclave of Kalingrad on the other side of the Baltic states so there are a lot of flights taking place, but not all of them follow the correct procedures.

“There’s always lots of chatter and if anything is bubbling up then our guys will start to prepare. If something looks suspicious then we can bring them to several stages of readiness, including having them ‘at slingshot’ with the engines running at the edge of the runway.”

As Melville talks, the radios around the room are buzzing with a wide variety of accents. British pilots, engineers and support staff form the largest contingent on base, but Ämari is also now home to Americans, Poles and Dutch, in addition to their Estonian hosts.

Remarkably, the air base was originally home to the Sukhoi SU-24 Russian aircraft and was constructed by the Soviets when they were occupying Estonia during the Cold War.

Ämari is located south west of Tallinn and is reached along a forest path that passes a cemetery for some of the previous Soviet residents who are buried with tail fins of their aircraft as gravestones. There are still Soviet-era stone buildings dotted around the base, but they remain empty and dilapidated in stark contrast to more recently constructed facilities since NATO began using the base in 2014.

Russia has repeatedly described any development or renovation at Ämari as a provocation, but a further expansion of infrastructure is already underway by the US Air Force. 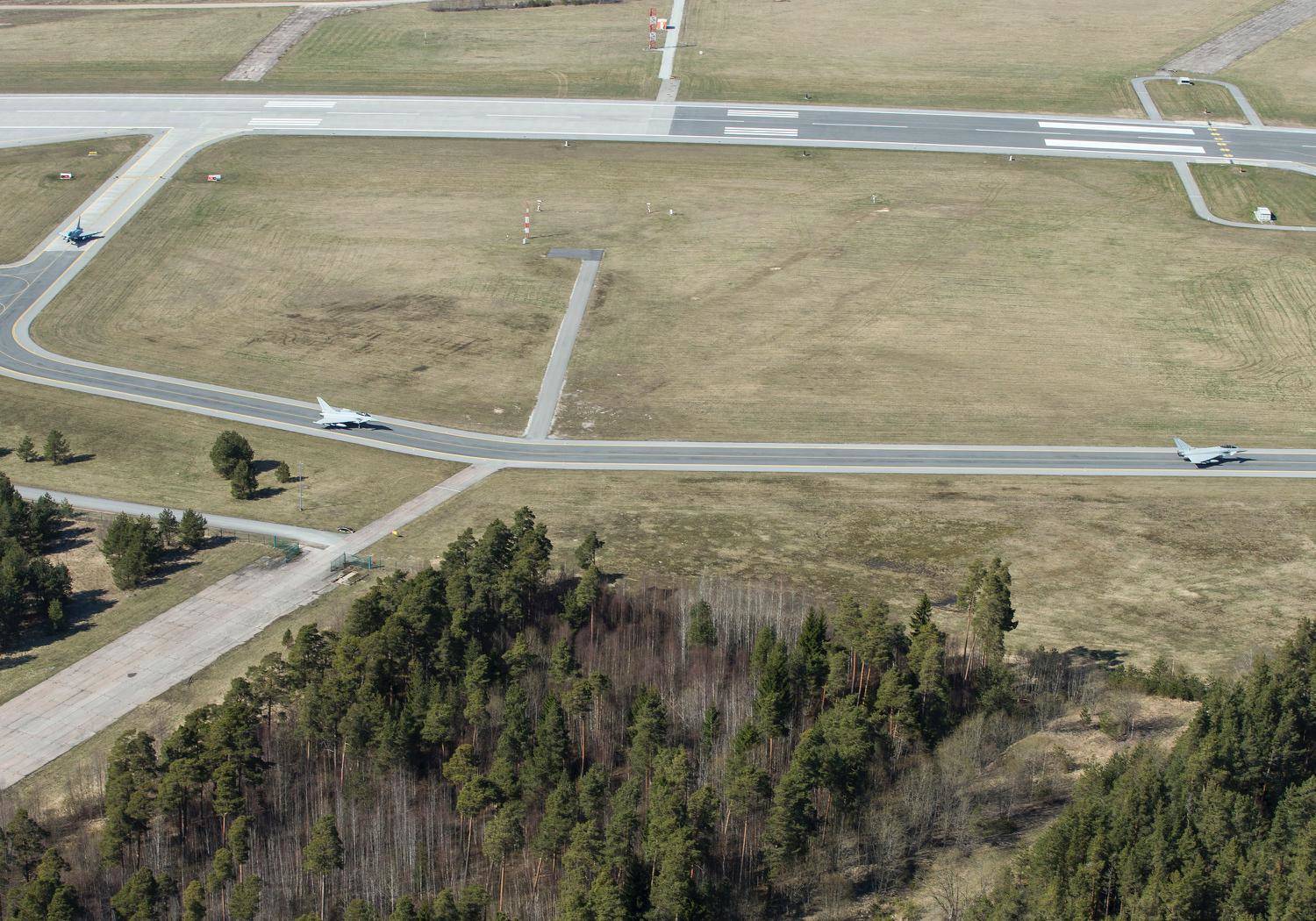 “The facilities here are state-of-the-art,” Melville explains. “Our Estonian hosts and other NATO colleagues are all really helpful and we all work as one team to ensure we can conduct our mission successfully. We are all pooling our capabilities together and that is really the genuine power of the NATO alliance.”

The scramble siren is heard everywhere on base so that all personnel, whether directly involved or not, are aware of the mission underway.
The real nexus of activity however is the Q-Shed, which is short for Quick Reaction.

Pilots enter the building for 24 hours, while engineers go in for a full seven days and the only reason any of them will leave during that period is to intercept aircraft so everything else is brought to them from meals to new books. The food inside the Q-Shed is distinctly British as the RAF brings its own catering over from the UK to provide a sense of home and familiarity.

Everything the pilots and engineers do during this period, including sleeping and eating, will be done in their flight gear mere metres from at least two fully fuelled and armed aircraft. The pilots even wear boots to bed, as well as a G-Suit for travelling at high speed and an immersion suit just in case they end up in the Baltic Sea that night. Anything else they need is carefully laid out between their beds and the cockpit where they put on their helmet as the final item. 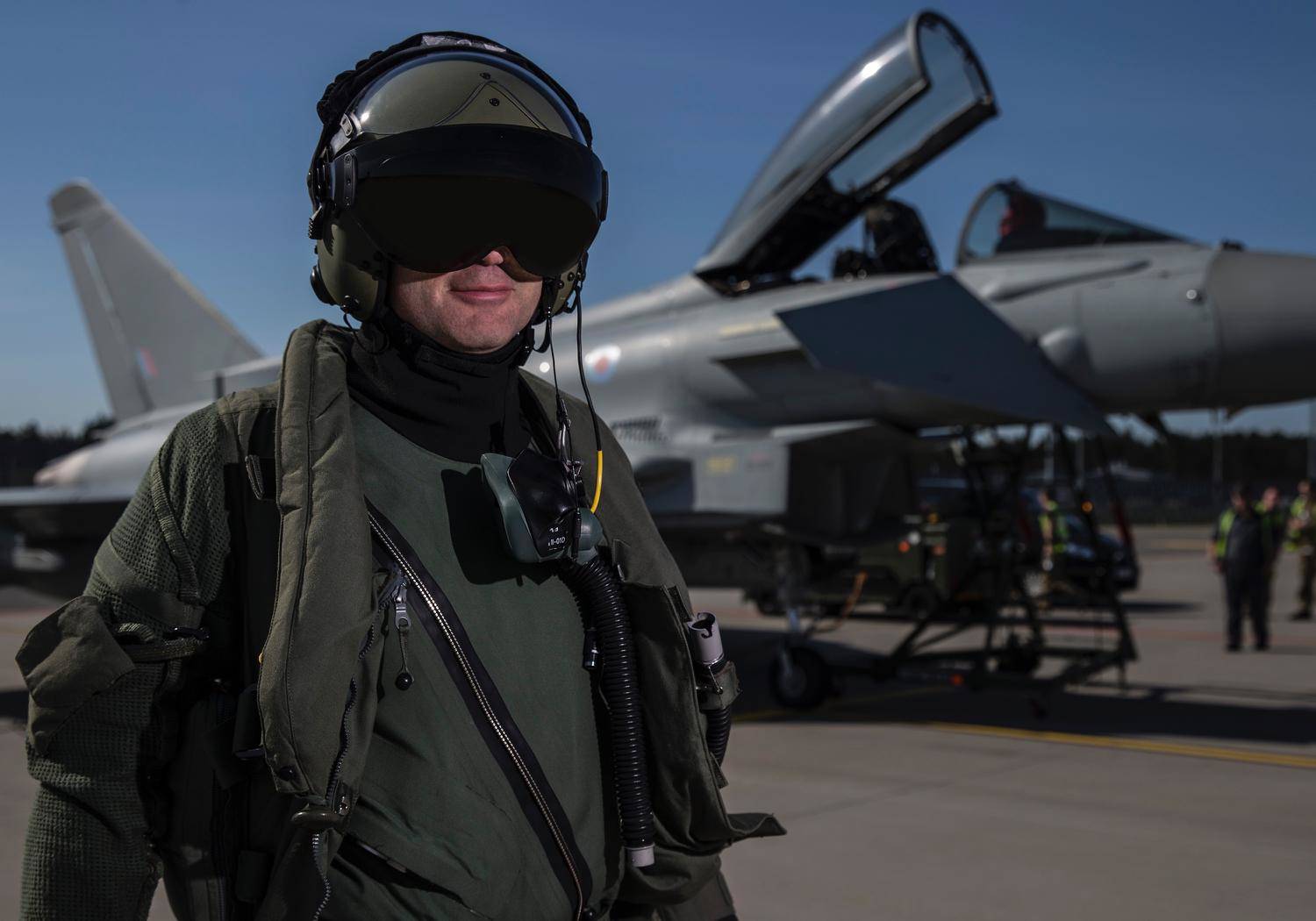 “The entire building has been designed and set up to get aircraft into the sky as fast as possible,” one of the pilots says. “We have automated our processes as much as possible so when the alarm sounds the entire place will light up and the hangar doors start opening. The pilots will usually have no idea what the mission is until they are airborne.”

“Every second counts,” Melville adds. “It is not normal to be sound asleep then airborne within minutes, but we monitor fatigue very carefully and there are lots of strict rules in place to make sure that the risks are at the absolute lowest.”

The Typhoons can reach over 1,700 km per hour (1,056 mph) within two minutes if NATO Command orders the Baltic Air Police to fly supersonic, but this is usually avoided due to the sonic boom that would rock homes below.

The RAF was scrambled again on Tuesday for their second operational task in less than a week when five aircraft were spotted flying through Estonia’s air information region. None of them were squawking recognised identification codes or communicating with air traffic control.

The RAF met the aircraft within minutes again and this time discovered four Russian fighter jets and one reconnaissance aircraft, which were escorted to Kalingrad’s flight information region.

Kalingrad has been the source of increased tensions in the Baltic region as Moscow continues to militarise the Russian enclave. The most serious incident occurred in April when the USS Donald Cook was sailing 70 nautical miles off Kalingrad and was buzzed by two Russian Su-24 planes that performed a simulated attack with multiple passes as low as 30 feet from the ship.

The US deputy defense secretary, Bob Work, described the incident as reckless and unnecessary, adding that the Russian military was becoming extremely aggressive on both the Black Sea and the Baltic Sea.

“We came out last year for Baltic Air Policing and responded on 17 occasions to 40 aircraft, including 10 aircraft in one go,” Melville says. “This mission is really important for the UK and NATO. It’s all about reassurance and we need to have that protection over the Baltic states, just as we do over the UK and other NATO skies.

“Several years’ experience operating in this area indicates that we can expect further similar activity in the months ahead,” Melville adds. “Our mission continues, and our NATO allies can stand assured of the UK’s full support for their defence.”