The former president of Estonia, Toomas Hendrik Ilves, presented the former US president, George W. Bush, with the Order of the Cross of Terra Mariana, First Class, the highest award granted by Estonia.

Ilves, while president, bestowed the decoration on Bush in 2012, but didn’t have a chance to present it in person until now. The order was awarded to Bush for a leading role in the expansion of NATO that led to Estonia’s joining the alliance in 2004, and for standing firmly behind Estonia’s foreign and security policy interests as a friend and supporter. 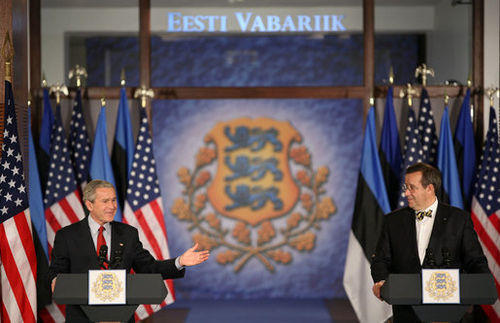 Ilves tweeted on 11 May that he had “put paid to a long-term debt finally presenting Estonia’s highest award to Pres. Bush for leading NATO enlargement for Estonia”, and in a separate tweet, “[a]nd for immediate [and] powerful support for Estonia these weeks 10 years ago when Estonia was under first wide-scale and political cyber attack”.

The former presidents met in Dallas, Texas, at the bipartisan roundtable, “Freedom, Free Markets and Security”.