The Russian president, Vladimir Putin, has named a regiment of the Russian air force after the Estonian capital, Tallinn. 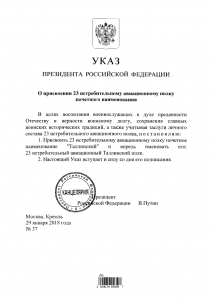 The presidential order, dated 29 January 2018, says the 23rd fighter aviation regiment is to be named the “Tallinn regiment”.

The move is certainly provocative towards Estonia, considering the Soviet air force in March 1944 bombed several cities in Estonia, including Tallinn, and almost completely destroyed the town of Narva in the northeast of the country.

By naming one of the regiments after Tallinn, the presidential order wishes to maintain “historical traditions” and to recognise the actions of the regiment’s personnel.

The home base of the newly-named regiment is in eastern Russia, in the region of Khabarovsk, relatively close to Japan.

Cover: A Russian jet landing (the image is illustrative).