The US president, Donald Trump, has withdrawn the nomination of Edward “Sonny” Masso to be the next ambassador to Estonia.

On 24 May 2018, over eight months after nominating the former admiral as the next ambassador, the White House somewhat mysteriously sent a notice of withdrawal to the Senate. No reason for the withdrawal was given.

President Trump nominated Edward Masso to be the next ambassador to Estonia in September 2017. Since then, the Senate had taken no action to either confirm or reject the appointment.

According to allgov.com, a website dedicated to government news, Estonian officials had made it clear that they were wary of Masso’s nomination.

“On his return from a Senate committee-sanctioned trip to the country in October 2017, Sen. Chris Murphy (D-Connecticut) reported that Estonian officials had expressed concern that the Trump administration was ‘downgrading’ their nation by replacing a career foreign service diplomat, current U.S. ambassador James D. Melville Jr., with a political appointee and acquaintance of Bannon,” the website said, pointing to the fact that Masso had served in the Navy with Steve Bannon, a controversial former Trump advisor.

The website also says that the Estonian officials’ concern was coupled with their “[deep worry] about the increasing incoherence of US foreign policy” under Trump, according to Murphy.

The Estonian-American rear admiral Edward “Sonny” Masso is a decorated naval officer and the founder of Flagship Connection, a consulting company on business development, strategic planning and operations analysis in the areas of missile defense, cyber security and data analytics. 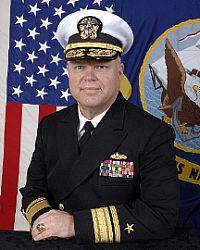 Masso also served in NATO and the United States European Command. He is also a Senior Fellow at the Potomac Institute for Policy Studies in Cyber Security. He graduated from the University of Mississippi in 1977.

Masso was born on 2 December 1955, in San Clemente, California. His father, Kuldar Masso, is an Estonian immigrant whose surname was originally Mässi. He graduated from San Clemente High School in 1973 and earned a bachelor’s degree in history education at the University of Mississippi in 1977, after which he was commissioned an ensign in the Navy. Masso was on full time active duty from 1977 to 1984.