To mark the ten years since Estonia joined NATO, Chris Holtby, the British Ambassador to Estonia, writes about the UK-Estonian defence cooperation.

More than sixty years ago, the UK became one of the founding members of NATO and it has remained a bedrock of our defence and security ever since. We work together with many partners in other security fora, but ultimately it is the interoperability and trust that we have built with our allies in NATO, which has been the fundamental safeguard of UK security for decades.

NATO became stronger through its enlargement 10 years ago and since then the UK has developed an especially close partnership with Estonia. This is a partnership based on the proven capability and commitment of our Estonian allies, including their strategic decision to invest more than 2% of national GDP in defence. 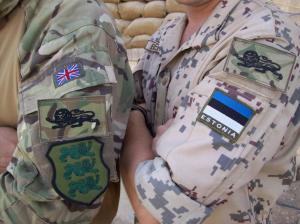 In this and many other areas of defence policy and action, Estonia is a model for others to follow.
Fundamentally, the UK military wants to work closely in the future with Estonian forces because we know they are capable and effective. This has been proved in Afghanistan. In support of the NATO International Security Assistance Force mission, an Estonian infantry company from the Scouts Battalion in Paldiski has served under British operational command in Helmand province since 2005.

Later this year, NATO will conclude combat operations in Afghanistan, but it stands testament to the unwavering commitment of our Estonian partners that they will join the UK as one of the last countries to extract its forces. We both remain committed to the building of effective Afghan security structures in the future. The participation of British soldiers in this year’s Independence Day parade in Pärnu was the first of several events this year which we hope will make clear our gratitude and respect to the people of Estonia for everything we have done together in Afghanistan, including the losses we have both sustained.

As we look beyond Afghanistan, the UK and Estonia are agreed that we should deepen future defence engagement. 2013 saw engagement at the most senior levels, with visits to Estonia by the UK Defence Minister, the Chief of the Defence Staff and the UK Chief of Joint Operations. UK soldiers also came to Estonia on exercises for the first time in nearly 10 years, and will return again this year. The depth and quality of our relationship was confirmed formally by the signing of a Defence and Security Cooperation agreement in December 2013. This agreement, and the extensive bilateral co-operation work plan which went with it, are evidence of the UK’s close ties and commitment to engage in joint activities with Estonia, and make clear that the UK’s defence relationship with Estonia is now closer than with almost any other country.

Following these top level exchanges, Estonia, the UK and a small number of other NATO allies are now engaging in the development of a new concept – a Joint Expeditionary Force – which will enable us to continue to work together in operations in the future, building on the interoperability and co-working achieved through ISAF in Afghanistan. Furthermore, in recognition of Estonia’s cutting-edge work in cyber defence development, a British expert was seconded to the NATO Cooperative Cyber Defence Centre of Excellence in Tallinn. Of course there is also a great deal of activity which does not hit the headlines – in the next few months, the UK and Estonia will collaborate on Baltic mine-clearing and courses at the UK Defence Academy and the Baltic Defence College.

The next NATO summit will be held in the UK in September 2014. We plan for the summit to underline the continued central importance of the trans-Atlantic bond and to be clear that European members of the alliance are committed, capable and willing to invest in their defence and security. The depth of support, mutual confidence and friendship we have received from our Estonian allies since your accession to NATO gives us confidence that this is realistic. We look forward to the next 10 years of defence cooperation with Estonia in NATO.

Congratulations on your anniversary.

* The article was first published by Estonian Atlantic Treaty Association.

Chris Holtby OBE has been the British Ambassador to Estonia since January 2012.