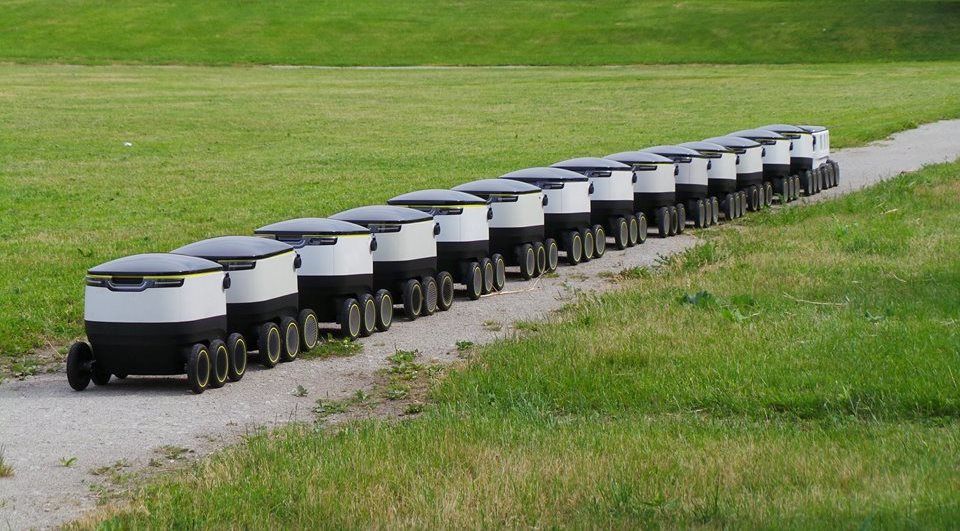 The Estonian delivery startup, Starship Technologies, is to test its autonomous delivery robots in the United Kingdom, Germany and Switzerland; a similar programme is to be announced in the US.

As part of the programme, dozens of robots will be deployed in five cities to run first test deliveries and introduce the innovative devices to the general public.

Robots developed by Starship Technologies are meant for delivering packages, groceries and food to consumers in a two-three-mile radius. The robots can drive autonomously while being monitored by human operators in control centres. Introduced to European and American cities since the end of last year, the robots have already driven close to 5,000 miles and met over 400,000 people without a single accident.

The test programmes will run in London, Düsseldorf, Bern and in another German city before moving to several other European and American cities. Starship Technologies will also continue testing in Tallinn, Estonia, where its R&D facilities are located.

The company will introduce fleets of small and earthbound delivery robots, running on batteries and therefore having zero CO2 emissions. The robots can carry parcels or grocery bags within a three-mile (five-kilometre) radius – the firm sees parcel delivery firms or grocery stores as potential customers for its products.

Heinla, the CEO of Starship Technologies, said the robots should cut the waiting time and have a “zero environmental impact”, while costing little. “We want to do to local deliveries what Skype did to telecommunications.”

Weighing no more than 40 pounds (18 kilograms) fully loaded; capable of carrying the equivalent of two grocery bags and driving at the speed of 4 mph (over 6 km/h), the robots are expected to complete local deliveries within 5-30 minutes from a local hub or retail outlet.

Customers can choose from a selection of short, precise delivery slots. During delivery, shoppers can track the robot’s location in real time through a mobile app and on arrival only the app holder is able to unlock the cargo. “If somebody tries to steal something, the operator can yell, ‘The police are coming in five minutes! We know your location, you’re being filmed’,“ Heinla explained to the BBC.

Integrated navigation and obstacle avoidance software enables the robots to drive autonomously – the “starships” have sensors and cameras to observe the surroundings – but they are also overseen by human operators who can speak to pedestrians via embedded speakers.

“They travel at the slow speed of four miles per hour – a brisk walking pace. They don’t fly – these are not drones. They travel on pavements or sidewalks, blending safely in with pedestrian traffic,” Heinla said.

Starship Technologies is currently testing and demonstrating prototypes, which have driven approximately 80 miles (130 kilometres) on the streets of Tallinn, London, New York, Boston and San Francisco. It plans to launch the first pilot service in early 2016 in Greenwich, London, and the others in cooperation with its service partners in the US, the UK and other countries throughout 2016.

The company already employs 30 people and has offices in London and Tallinn. Apart from Heinla, another Estonian serial entrepreneur is involved – Allan Martinson, the founder of Baltic News Service and Estonian online portal Delfi; he serves as the Chief Operating Officer.