In Estonia, a small but quickly growing group of high-tech defence companies are finding paths to international success.

In fact, most countries that take national security and economic growth seriously are host to companies dedicated to the defence sector. This industry generates high-level, specialised, often engineering or IT-related jobs, provides a smooth outlet for military veterans to join the private sector and increases a country’s indigenous capacity for the production of war material in a potential crisis.

Most states tend to favour, in effect subsidise, their own national producers when it comes to arms and technology purchases. These are usually strategic companies that the host state has a vested interest in supporting, sometimes even at substantial political costs, as the case of France and the ongoing question of the Mistral ships to Russia so aptly demonstrates. Estonia, however, (perhaps to be seen as part of its overall commitment to economic freedom) does not directly privilege its own companies in its procurement. In a way, this has been blessing in disguise as it has forced Estonian defence industry companies to think internationally from the very beginning. It has forced them to identify and specialize in various high-tech, innovative niche capabilities, some of which deserve a closer look.

One company that exemplifies Estonia’s innovativeness is Defendec, which is becoming known around the world for its remote premises surveillance technology. Founded in 2007, Defendec now operates globally with offices in Estonia, Washington DC and Singapore. Its patented Smartdec wireless sensor network technology relies on so-called “smart dust” detectors that are small in size, easily hidden, and equipped with wireless HD cameras that relay information about intrusions such as human or vehicular activity back to the operator. After several rounds of seed funding, product development and expansion, Smartdec technology is now being used at many international borders, including those of NATO and the EU, to help deal with a variety of criminal and terrorist threats. Finally, Defendec is broadening its scope to expand into critical infrastructure surveillance and protection as well. In the words of the CEO, Jaanus Tamm, the technology has essentially limitless application potential.

A second example is Cybernetica, which was established in 1997, but has recently entered the high-tech defence and space sector. Cybernetica has developed a promising new way to build trust among nation-states in the international security domain. The cryptographic system of safely sharing secrets, called Sharemind, enables, among other things, states with space capabilities to take steps to prevent satellite collisions, without providing sensitive information like specific trajectories.

In that particular case, the system works by separating the trajectory data of multiple states’ satellites into parts that are each located in a different server and separately reveal nothing. However, Sharemind is able to analyse this encrypted data (without knowing the specific trajectories itself) and predict possibilities of collisions. It can then warn and suggest instructions for avoiding collisions. Considering that each satellite can cost approximately fifty million dollars, this can be an invaluable tool for preventing unnecessary resource loss and building trust in a low-confidence domain. The system was developed as part of a contract with the United States’ Defense Advanced Research Projects Agency (DARPA), which, among other things, provided much of the early impetus for the development of what we now call the Internet. In fact, it is interesting to note that the director of that agency had not made a single trip abroad in her first three years of service, but when she did, it was to Estonia.

A third Estonian company that has become active in a niche aspect of defence sector is Threod Systems, which produces unmanned aerial systems (UAS, or drones as they are commonly called). These days, no serious military can imagine having to do without the intelligence and reconnaissance provided by UAS. The Estonian security sector is moving in that direction this year as well, but Threod’s business ambitions are directed beyond Estonia’s national borders.

Taking advantage of Estonia’s extensive expertise in IT and other dimensions of mechatronics, Threod has developed a range of different drones, from the small, low altitude and limited capacity multirotor UAS to the large, high-speed and high-altitude Theia UAS. With its client-focused approach, Threod has also implemented numerous customization options, including optical systems enabling, for example, infrared or cloud penetrating capabilities and a variety of ground control and autopilot alternatives. Threod’s drones comply with high-level NATO standards, use world-class encryption methods, and employ frequency-hopping techniques for increased jamming resistance, and their experts also provide training and consultations. As Threod’s CEO Sten Reimann puts it, what the customer really wants is information; Threod has to be versatile enough to provide the means for the customer to accomplish their needs. 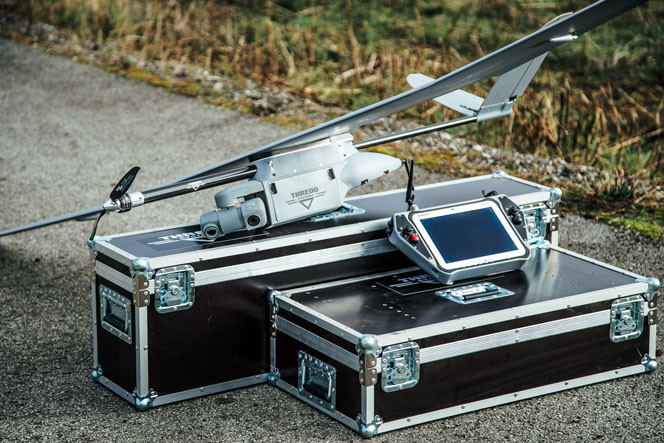 All three of these companies are not exclusively defence sector companies. For example, Defendec’s Smartdec has applications for logistics monitoring, Cybernetica’s Sharemind for privacy-preserving analysis of health data, and Threod’s UAS’ for topological research or cinematography. However, they and several other companies are increasingly putting Estonia on the map in terms of innovative defence sector technologies. Of course, there is still quite a way to climb. According to the Stockholm International Peace Research Institute (SIPRI), the company at #1 in the rankings of defence companies declared revenue of US$35 billion and the company at #100 declared US$770 million in 2013. However, almost all of these top 100 companies are in Western Europe, North America, Russia, China, Japan, India and other established or emerging powers. Estonia will most likely never get to that level, but its companies can and should keep finding niches where Estonia has a competitive advantage in global markets. If they do, their activities will strengthen Estonia’s national security and increase its economic prosperity.