Birgit Karus, a co-founder of Fanvestory, a platform for music copyrights, talks about disrupting the music industry, being a female entrepreneur and what it takes to start something of your own.

This article is commercial content, paid for by Fanvestory.

People like Birgit make starting and running your own business seem easy. It’s nine o’clock on a Tuesday morning and she is full of energy. “A good night’s sleep is the most important part of a good day’s work. Without it, the simplest tasks take twice as long. I tell my team to make time for sleep, too. Do it once and do it well.” After this interview, she has a day of meetings ahead, but she doesn’t consider meeting people to be work.

Like with every idea, Fanvestory started by wanting to make something better – in this case, the music industry. “The idea was organically born from what I thought could be improved and seeing first hand, what the music industry was missing. It was the Tallinn Music Week 2016 and we found ourselves at a Digix Hackathon (creative industries hackathon – editor) by mistake,” Karus recalls. “That’s where I met one of my co-founders, Juko-Mart Kõlar, who sits on the board for the Estonian Authors’ Society and is an advisor on music in the Estonian Ministry of Culture. We realised that many artists had trouble getting started due to a lack of funds. Some look to Kickstarter, but it doesn’t work for everyone. The problem is that music makes money in the future, but artists need it today.”

Birgit met her other co-founder, Kristjan Ulst, at the second hackathon. With close to a decade of software development experience, he was the one who could help them create the product. “We all have different competencies and help each other grow. Innovation comes from different competencies.”

The music copyright industry is a complicated place and Birgit believes it needs to be disrupted after a century without change. “Music is created by creative types but dealing with copyright is the opposite of that. Different competencies are needed – creative, IT, legal etc. And you also need money. That’s where Fanvestory comes in.”

Fanvestory is a platform for music copyrights. It allows fans to buy a part in a piece of music and be entitled to its future royalties, while supporting their favourite artists. Artists are provided money upfront for their copyrighted work and are given a direct line to their most loyal fans. Fanvestory collects the money from sources in Estonia and Sweden and works as a kind of middleman between the fans, artists, labels and copyrights. So far, the company has completed seven projects and is the first of its kind, dealing with micro investors, something that they couldn’t have done before.

While Fanvestory doesn’t have any direct competitors, there are similar platforms like Patreon, which offers monthly support in exchange for merchandise; Royalty Exchange, which allows fans to buy large pieces of the copyright, or various blockchain music distribution platforms. “We want to do one thing and we want to it well. We don’t take the rights from the artist, we take part of the revenue share. We offer artists the best deal they can make for themselves.” 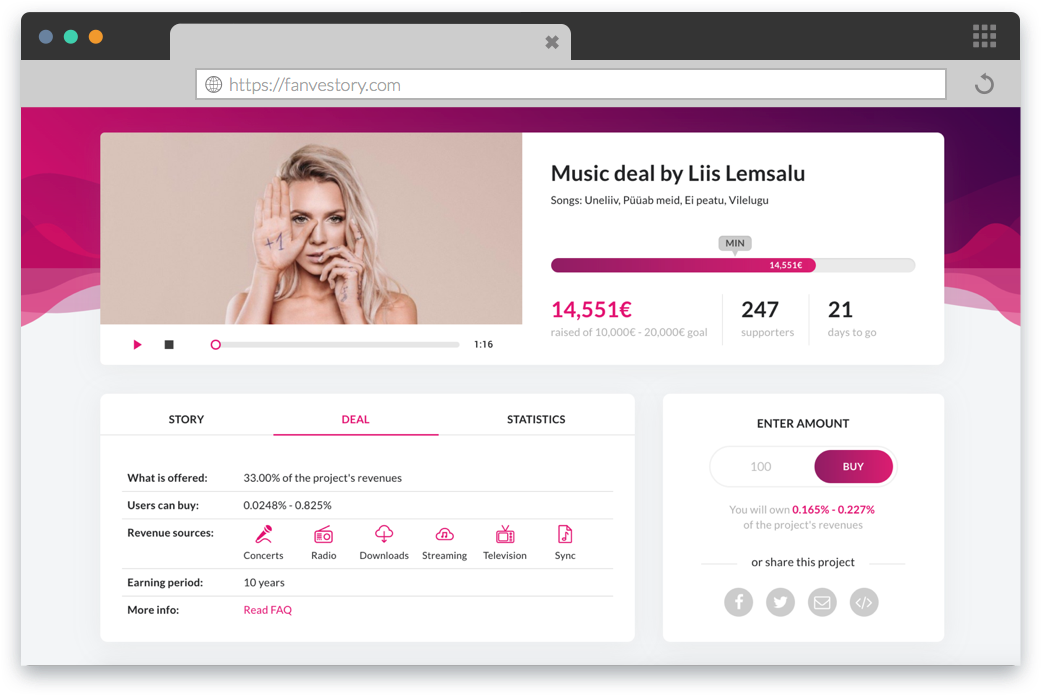 The future looks bright for the company. With seven successful projects under its belt and an upcoming project in Finland, the platform is growing. “We are now focusing on our launch in Scandinavia and the UK. These are some of the biggest markets, as many songwriters come from there too. In the future, we will be looking to expand to Asia.” Fanvestory was also selected for the Finest Sounds project, which is an export programme for Estonian and Finnish creative industries to Japan. 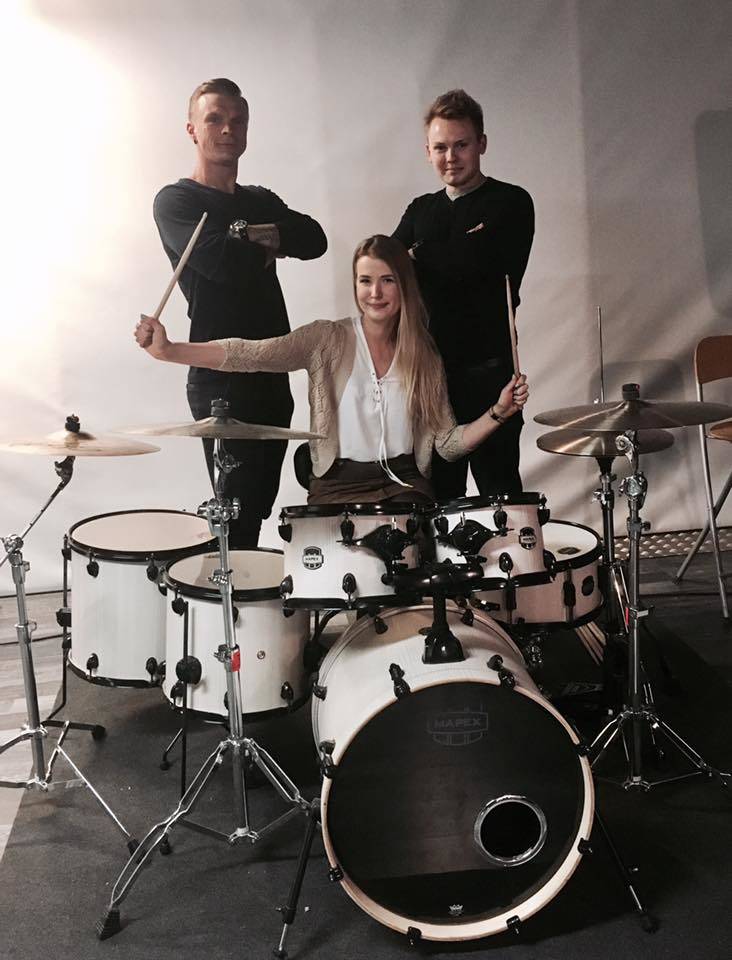 The fan-artist relationship is strong. “A while ago, Ott Lepland (an Estonian singer – editor) lost his cat and one of his fans helped him find it by reaching out to her social media network,” says Birgit. “The fanbase is growing steadily. Fans are generally between 25-45 years of age and there are three different kinds. There are those that only invest, diehard fans who only want to support the artists they love, and then smaller investors who put in an average of €50 and are offered something extra like virtual goods and signed CDs.”

Birgit has travelled extensively, having spent many summers working abroad, as well as a stint living in China. For the first time, she doesn’t want to move away from Estonia. “I’ve found the right thing in my life,” she says. “It’s been quite the year. I’ve met so many incredibly inspiring people. For example, Maksekeskus (an Estonian payment platform – editor) was really helpful in the beginning to get us up and running, as well as our investors and mentors, who have been really hands-on in opening up international doors for us, which otherwise would have taken years to reach.”

Entrepreneurship is the best education

Internationally, only 17% of startups have female CEOs and Birgit is one of them. Recently, she was awarded the Best Female Startup Award by the Lean in EU Women Business Angels. “I don’t usually take part in the female-only prizes because I don’t think gender matters, but something like this is good exposure and it’s good to be a role model for girls in Estonia.”

Recently Birgit went to her old high school to give a lecture about what she had been doing since graduating. “The room was silent. I thought everyone was sleeping at the end of my presentation, but they were silent because they were keenly listening. I asked the group, who wanted to be an entrepreneur, and no one raised their hand. Entrepreneurship is not for everyone, but if you have a great idea, then why not go for it. Entrepreneurship is the best education you can give yourself.”

Entrepreneurship comes in many different sizes, according to Birgit. Even the smallest thing matters. You just must have the right attitude, a good night’s rest, and an appetite for adventure. And, of course, music. 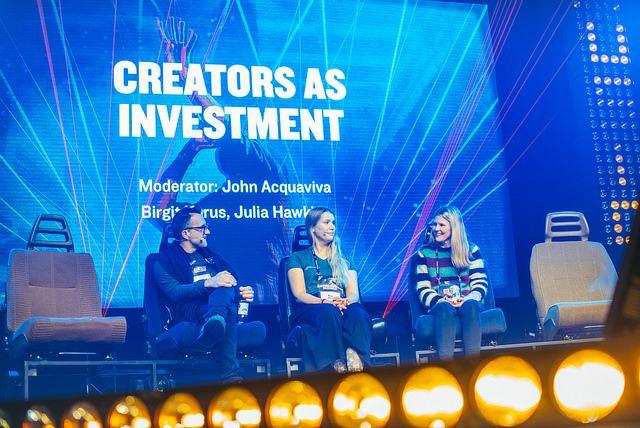 Want to support your favourite artists? Join Fanvestory today and let us know who you’d like to see on the platform.

Cover: Birgit Karus accepting the Best Female Startup Award by the Lean in EU Women Business Angels. This article is commercial content, paid for by Fanvestory.