Yet another fiasco has hit the new Estonian populist and far-right government as Kert Kingo, the new minister of foreign trade and information technology, insists speaking in Estonian on foreign trips, using an interpreter instead.

Kingo, appointed to the ministerial post by far-right Estonian Conservative People’s Party (EKRE), is scheduled to represent the Estonian government at the Open Government Partnership Global Summit 2019 in Ottawa, the capital of Canada, from 29-31 May.

Wants to travel as little as possible

Kingo added that although she had never studied English in school, the use of an interpreter was not due to her poor language skills. “That’s my decision, I can’t say I’m exactly an English philologist, but it’s normal that every person speaks their own language,” she said.

Kingo also told the newspaper that she planned to travel as little as possible as a minister – despite being responsible for foreign trade. “I only plan to travel in extreme cases and, whenever possible, I will delegate foreign visits,” she said.

The new foreign trade minister said she was ready to speak English only “among small groups of people” and “on tourist trips abroad”. But she stressed that “at the communication level, if there is a bilateral conversation, the Estonian ministers should speak abroad in Estonian”.

However, Kingo said that in future, she plans to take English courses.

The former prime minister of Estonia, Taavi Rõivas, said in a Facebook post that the task of the foreign trade minister is to travel around the world, help Estonian companies access foreign markets and get foreign investments to Estonia – to sell Estonia.

“This has to be done often not speaking just one foreign language, but many, and to inspire audiences with one’s speeches and lectures,” Rõivas said. “A right person in this role can only make Estonia bigger.”

He added that a foreign trade minister who sits at home with an interpreter reminds him of a joke about a salesman who “actively sits by the phone at home and waits for the customer to call”.

The former Estonian finance minister, Jürgen Ligi, added that abroad, a minister who doesn’t speak foreign languages doesn’t exist. “No one will take them seriously, they’re not invited and not listened to,” he noted. “Already in the nineties, a politician’s English marked the clear difference between the West and the East.”

Not rock bottom yet

Ligi pointed out that ministers with interpreters are a rarity and just an embarrassment around the table. “I can remember ministers from Bulgaria, Romania, one Latvian minister. Even a French minister was left behind when his English was poor.”

“In this sense it’s only good that Kingo doesn’t engage in foreign trade and prefers to stay at home. She shouldn’t engage with IT, either,” Ligi added.

Kristina Kallas, the leader of the Estonia 200 party that didn’t get enough votes to enter the parliament, also commented the minister’s stance. “The highest person to be responsible for the country’s foreign trade, who doesn’t speak languages, doesn’t want to travel, and goes to represent my country at a summit where supposedly ‘something that has to do with an open state’ is happening. I thought that the level of incompetency can’t drop further, but, again, I have to admit, that we’re not at rock bottom yet,” she said.

Kingo was elected to the new parliament as an EKRE MP on 3 March 2019. She was nominated as the new IT and foreign trade minister by her party on 13 May – to replace Marti Kuusik, also from EKRE, who had to resign after just a day in office, after facing allegations of domestic violence. Kingo took up the ministerial post on 16 May. 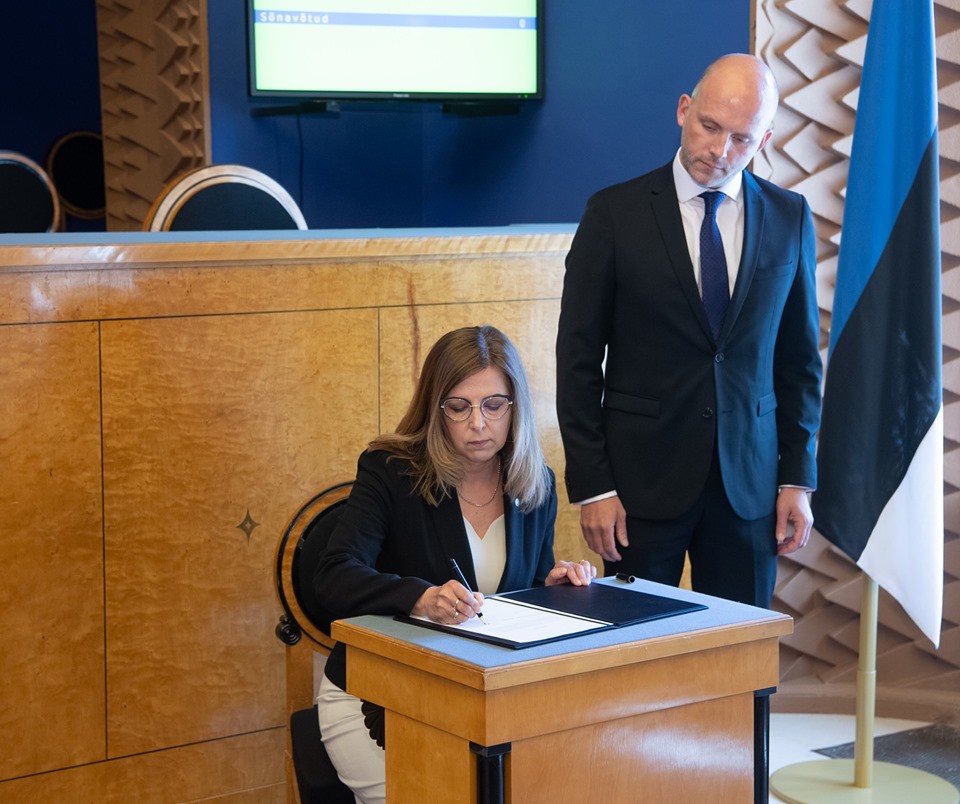 Problems and embarrassment – both at home and abroad – have plagued prime minister Jüri Ratas’s (Centre Party) government ever since he decided to form a coalition with the far-right EKRE and the conservative Isamaa party.

After years of being in the international news for successful reforms, digital government, startups and music culture, Estonia’s positive reputation took a hit when Mart and Martin Helme – EKRE’s leader and a deputy leader, respectively – both made alleged white power gestures at their swearing-in on 24 April. The incident was reported by BBC, New York Times, BuzzFeed and other global outlets.

Mart Helme, the new interior minister, later called the country’s first female president, Kersti Kaljulaid, an “emotionally heated woman” for walking out during the swearing-in of Marti Kuusik, who was accused of domestic violence. Mart and Martin Helme, the new finance minister, have both verbally attacked the independent media and journalists at the Estonian Public Broadcasting. EKRE also hosted the French nationalist populist politician, Marine Le Pen, in Estonia.