For the third year in a row, the Washington, DC-based think tank, Tax Foundation, has declared the Estonian tax system the most competitive in the Organisation for Economic Co-operation and Development.

According to the International Tax Competitiveness Index, Estonia’s top score is driven by four positive features of the country’s tax code.

“First, it has a 20 per cent tax rate on corporate income that is only applied to distributed profits. Second, it has a flat 20 per cent tax on individual income that does not apply to personal dividend income. Third, its property tax applies only to the value of land rather than taxing the value of real property or capital. Finally, it has a territorial tax system that exempts 100 per cent of the foreign profits earned by domestic corporations from domestic taxation, with few restrictions,” the Tax Foundation says in its 2016 report.

In addition, the report calls Estonia’s tax system “unique in the OECD”.

According to the Tax Foundation, its tax competitiveness index seeks to measure the extent to which a country’s tax system adheres to two important aspects of tax policy: competitiveness and neutrality.

“A competitive tax code is one that keeps marginal tax rates low. In today’s globalised world, capital is highly mobile. Businesses can choose to invest in any number of countries throughout the world in order to find the highest rate of return. This means that businesses will look for countries with lower tax rates on investment in order to maximise their after-tax rate of return,” the report explains.

“A tax code that is competitive and neutral promotes sustainable economic growth and investment while raising sufficient revenue for government priorities,” according to the think tank. 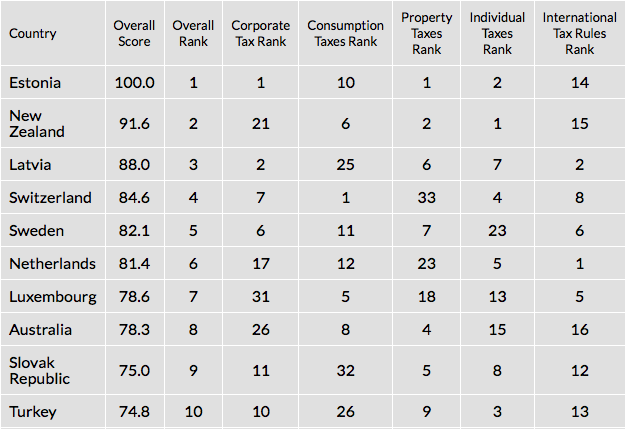 The second most competitive tax system among the OECD countries is in New Zealand, and the third, somewhat surprisingly, in Latvia, Estonia’s southern neighbour. “Latvia, which recently joined the OECD, has a relatively low corporate tax rate of 15 per cent, speedy cost recovery, and a flat individual income tax,” the report notes.

The Tax Foundation is a Washington, DC-based think tank, founded in 1937, that collects data and publishes research studies on tax policies.

Cover: high-rise buildings in Tallinn city centre (the image is illustrative/courtesy of EAS.)