For the fifth year in a row, the Tax Foundation, a US-based think tank, has declared the Estonian tax code as the most competitive among the countries that belong to the Organisation for Economic Co-operation and Development.

Estonia’s top score is, according to the Tax Foundation, driven by four positive features of its tax code.

“First, it has a 20 per cent tax rate on corporate income that is only applied to distributed profits. Second, it has a flat 20 per cent tax on individual income that does not apply to personal dividend income. Third, its property tax applies only to the value of land, rather than to the value of real property or capital. Finally, it has a territorial tax system that exempts 100 per cent of foreign profits earned by domestic corporations from domestic taxation, with few restrictions,” the 2018 International Tax Competitiveness Index said.

Estonia’s southern neighbour, Latvia, came in second and that is partly because of Estonia. “Latvia implemented a business tax reform package that matches the competitive Estonian system,” the report noted. “Latvia now applies a corporate income tax at a rate of 20 per cent to distributed corporate profits. It was already among the top five most competitive countries, and these reforms helped Latvia move to 2nd place behind Estonia.”

Latvia is followed by New Zealand and Switzerland. “New Zealand has a relatively flat, low-rate individual income tax that also exempts capital gains (with a combined top rate of 33 per cent), a well-structured property tax, and a broad-based value-added tax,” the index asserted. “Switzerland has a relatively low corporate tax rate (21.1 per cent), a low, broad-based consumption tax, and a relatively flat individual income tax that exempts capital gains from taxation.” 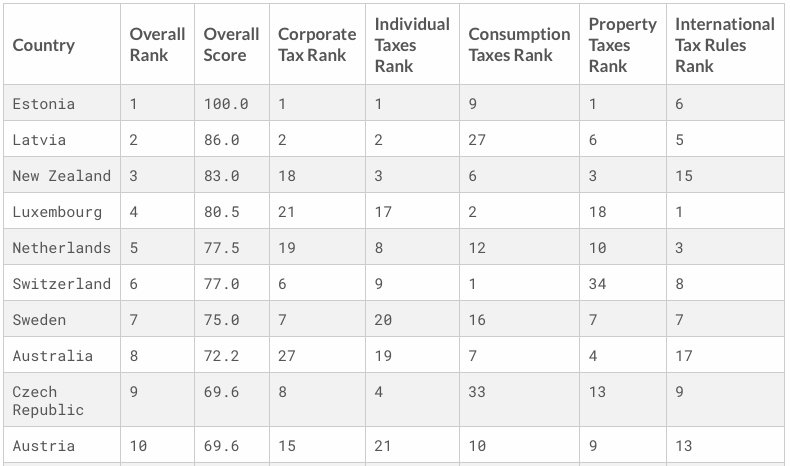 The Tax Foundation is a Washington, DC-based think tank that collects data and publishes research studies on tax policies. Its mission is to “improve lives through tax policy research and education that leads to greater economic growth and opportunity”.