According to latest figures released by the US-based Tax Foundation, Estonia has the most competitive tax system in the OECD (the Organisation for Economic Co-operation and Development).

“Estonia currently has the most competitive tax code in the OECD. Its top score is driven by four positive features of its tax code. First, it has a 20 per cent tax rate on corporate income that is only applied to distributed profits. Second, it has a flat 20 per cent tax on individual income that does not apply to personal dividend income. Third, its property tax applies only to the value of land rather than taxing the value of real property or capital. Finally, it has a territorial tax system that exempts 100 per cent of the foreign profits earned by domestic corporations from domestic taxation, with few restrictions,” the Washington, DC, based foundation said.

The foundation added that while Estonia’s tax system is unique in the OECD, the other top countries’ tax systems receive high scores due to excellence in one or more of the major tax categories. New Zealand has a relatively flat, low-rate income tax that also exempts capital gains (combined top rate of 33%), a well-structured property tax, and a broad-based value-added tax. Switzerland has a relatively low corporate tax rate (21.1%), low, broad-based consumption taxes (an 8% value-added tax) and a relatively flat individual income tax that exempts capital gains from taxation (combined top rate of 36%). Sweden has a lower than average corporate income tax rate of 22% and no estate or wealth taxes. The Netherlands has competitive international tax rules. Additionally, every country in the top five has a territorial tax system. 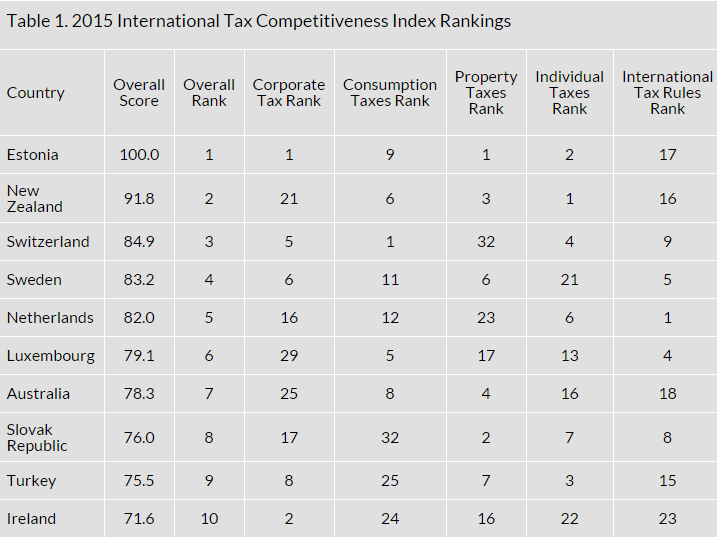 The ITCI scores the 34 member countries of the OECD-based on these five categories in order to rank the most competitive tax codes in the industrialised world.

The Tax Foundation is a non-partisan research think tank, established in 1937.