To a stranger – a wondering eye in a new country – architecture can be a window to the country’s past, present and future. We compiled a selection of remarkable Estonian architecture from the recent decades, which represents a new, forward-looking and confident Estonia.

City Plaza (Alver Trummal Architects, 2004. Photo by Tiit Veermäe) – this building has some brutal undertones in the heart of the capital. It is a good example of modern office architecture that incorporates a few restaurants, a spa and a gym complex as well. 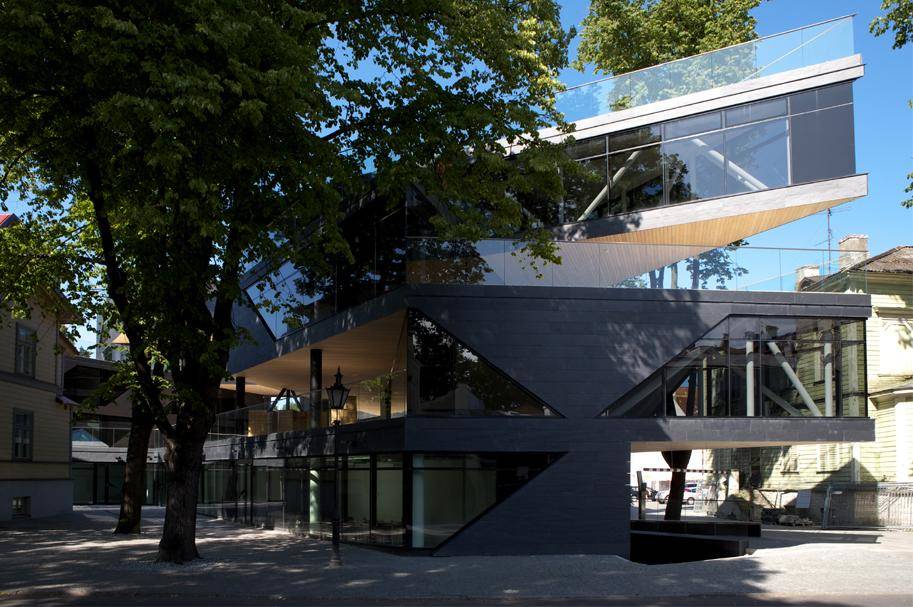 Aia 4 commercial and apartment building (AB Kosmos, 2009. Photo by Paco Ulman) – one of the geometric masterpieces situated on the edge of the Old Town of Tallinn that in its futuristic character makes the viewer question the direction of the modern society and ambitions of our everyday life. 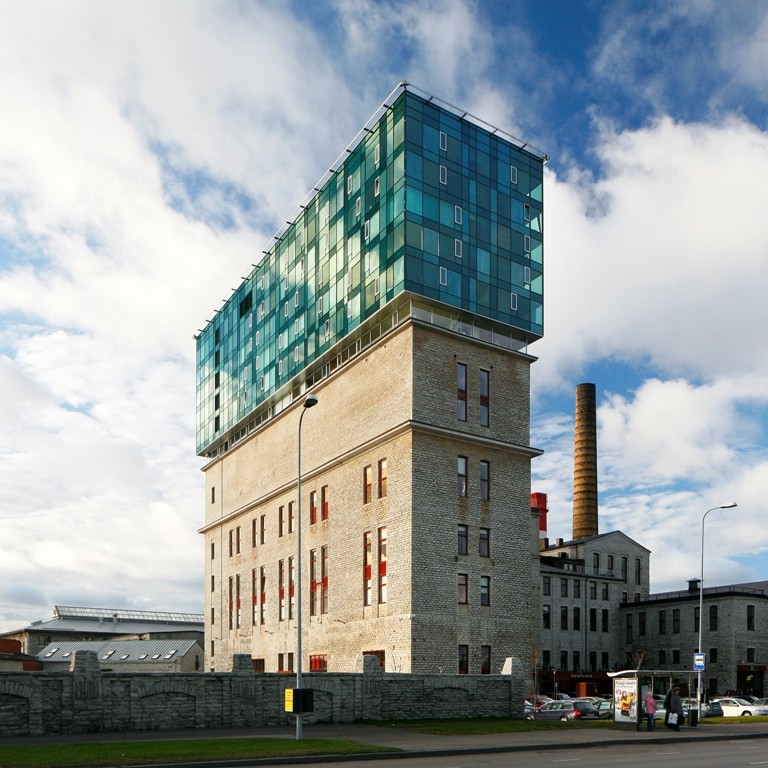 Fahle apartment and office building (KOKO Architects, 2006, original limestone factory building 1926. Photo by Martin Siplane) – a structure that (probably) got the most publicity in the international media during the 2000s, as it is a two-in-one renovation and new-built project in a show-off mode, best viewed when entering the city centre coming from the Lennart Meri Tallinn Airport.

Lotte kindergarten (KavaKava Architects, 2008. Photo by Kaido Haagen) – situated in the suburbs of Tartu, it shines out with its concrete design and enclosed courtyards – all in one outlined block.

Koidula 24 apartment building in Tallinn ( 3+1 Architects, 2005. Photo by 3+1 Architects) – a project that made a good use of renovation, as well as the use of courtyard space – definitely worth further exploring!

Black House, private home (architect Martin Aunin/EA Reng, 2010. Photo by Kaido Haagen) – one of the most recent projects that paves the way for postmodern designs of private houses – in addition it has mixed in some morphological visual elements of an office, a beach pavilion and a lounge.

NO99 Straw Theatre in Tallinn (Salto AB, 2011. Photo by Martin Siplane) – this experimental building was completed in May 2011 and dismantled in November 2011 as it served its purpose as the summer theatre for NO99 – although short-lived, it managed to prove that it is possible to build public buildings out of highly flammable material as straws (it took some effort from the designers, but finally the fire safety department approved).

Pärnu Inner City Gym (KavaKava Architects, 2005. Photo by Kaido Haagen) – an interesting confrontation of the old and new – a century apart, those two buildings are both beautiful examples of brick architecture.

Pärnu Concert Hall (architects K. Koov, K. Nõmm, H. Grosschmidt, 2002. Photo by VisitEstonia) – a cylinder-like structure that has glass curtain walls has the most mesmerising impression at night when an event is on and the facade is like a live stage with displaying concert goers during the breaks to the passing citizens.

Snail Tower (Künnapu and Padrik Architects, 2008. Photo by Arne Masik) – the tallest building in Tartu that has a feng-shui aura with its snail-inspired floor plan, supported by the science centre Ahhaa next to it. 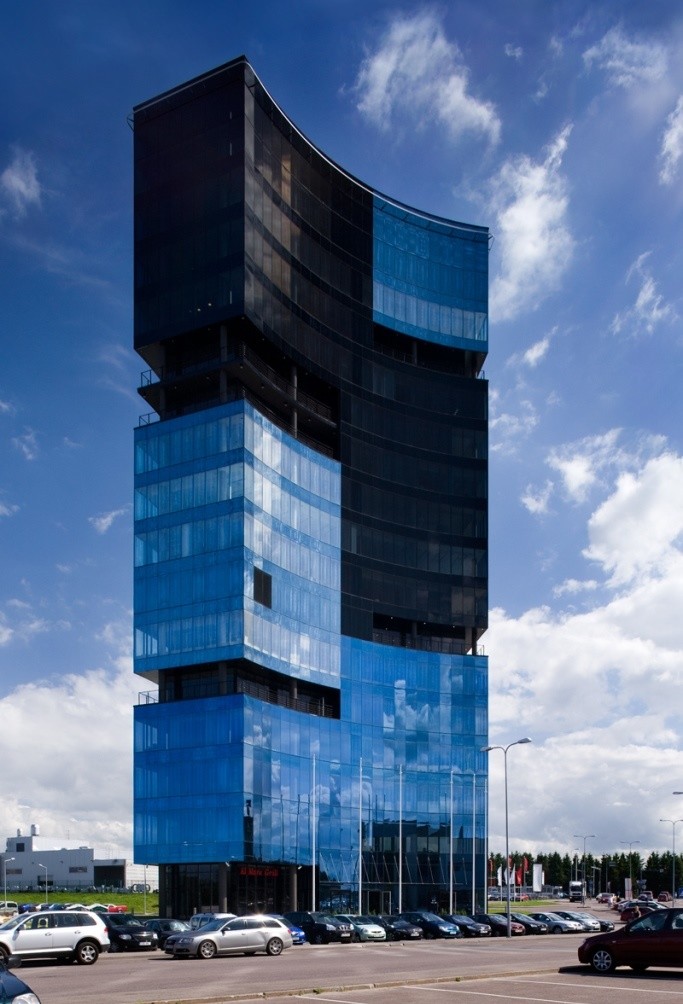 Rotermann Quarter (architects Ott Kadarik, Villem Tomiste, Mihkel Tüür, 2007. Photo by Martin Siplane) – one of the most developed lot of land in Tallinn city centre, that has had the opportunity to create an inner-block urban environment version 2.0 with positively dramatic facades and well-defined pedestrian squares. 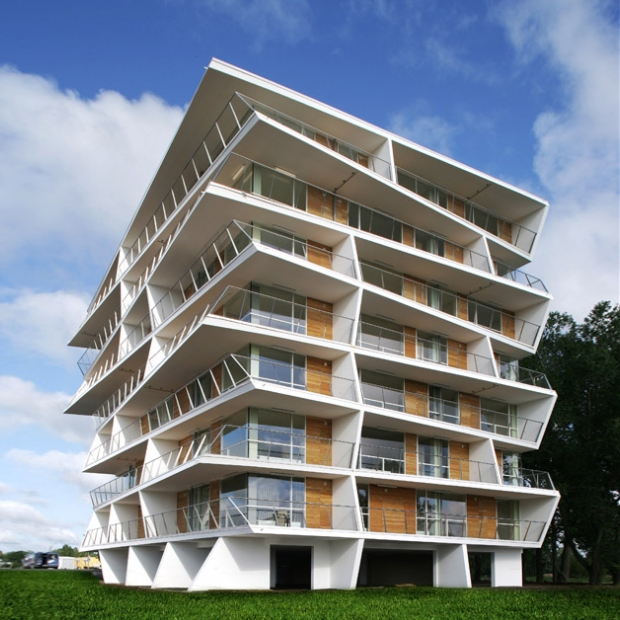 Siili 6 apartment building in Tartu (architects Thomas Pucher and Alfred Bramberger, 2008. Photo by Wikimedia Commons) – an expressionist facade makes this apartment building a landmark. Although having foreign architects, it presents the continuous spirit of Estonian architecture as one streamline Nordic style. 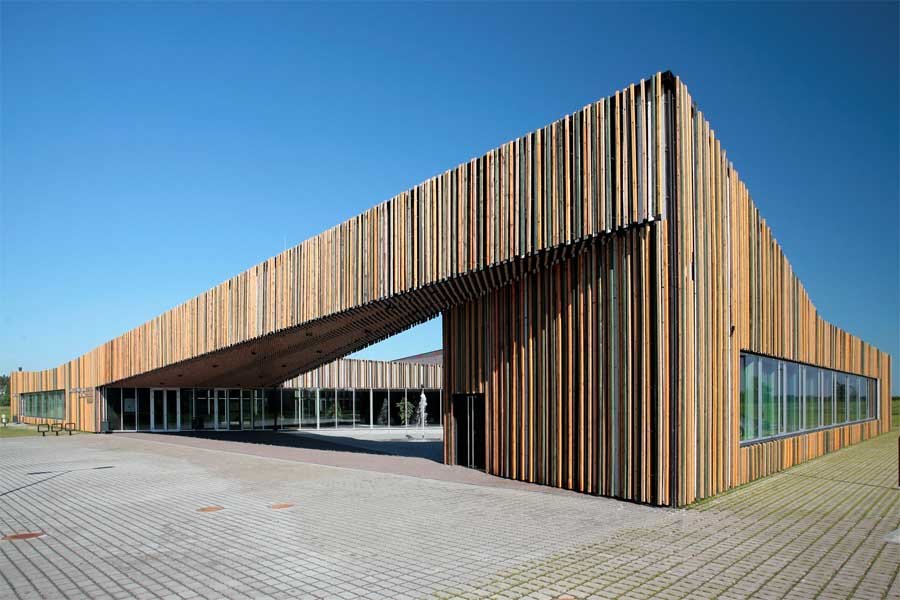 Sõmeru Community Building (Salto AB, 2010. Photo by Salto AB) – a community centre with a facade that besides its good looks has been rewarded nationally – not to mention the local visitors that appreciate it every day. 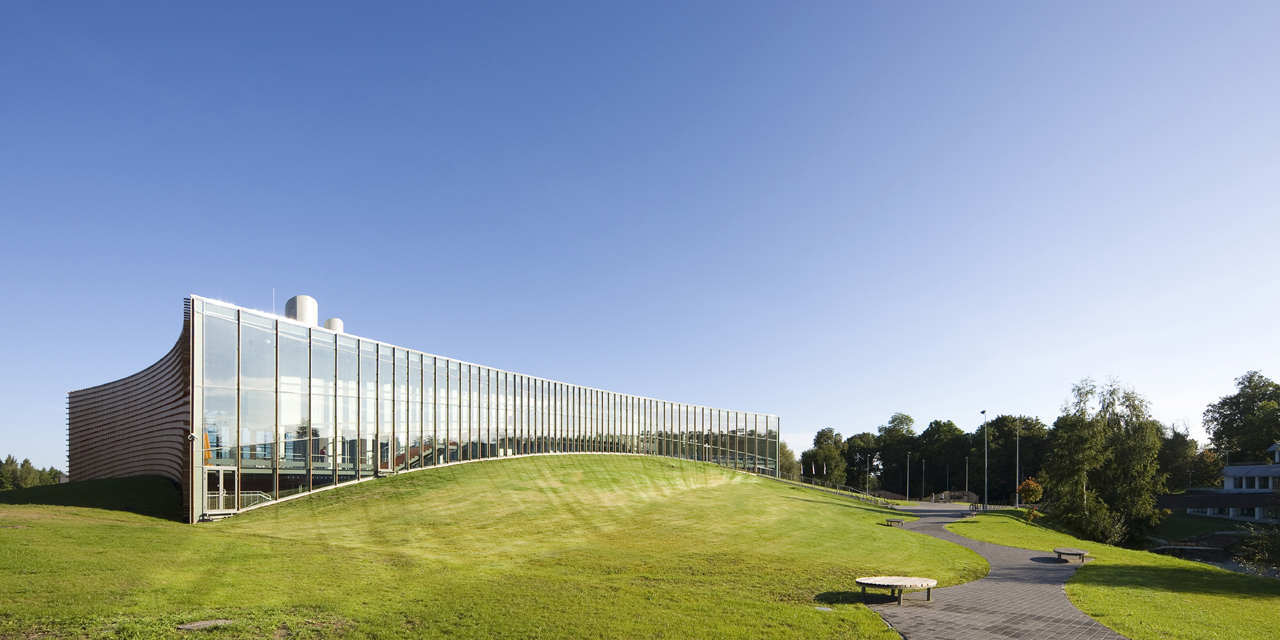 Sports Hall of the Estonian University of Life Sciences in Tartu (Salto AB, 2009. Photo by Kaido Haagen) – the negative surfaces of the facade give this building a distinctive look that makes this gym building a landmark in itself. 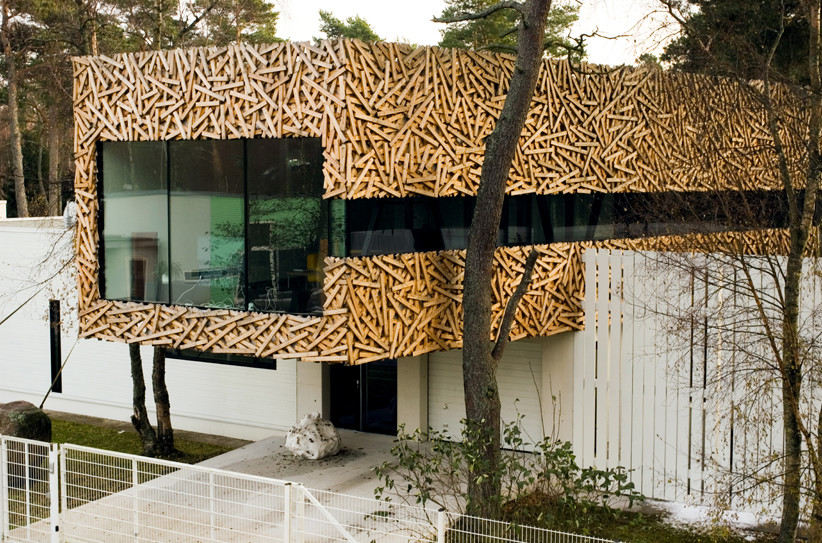 Suurupi House extention, private home (Muru & Pere AB, 2009. Photo by Tarmo Varres) – a building that makes a brave move and shows how a extension can create harmony through contrasts. 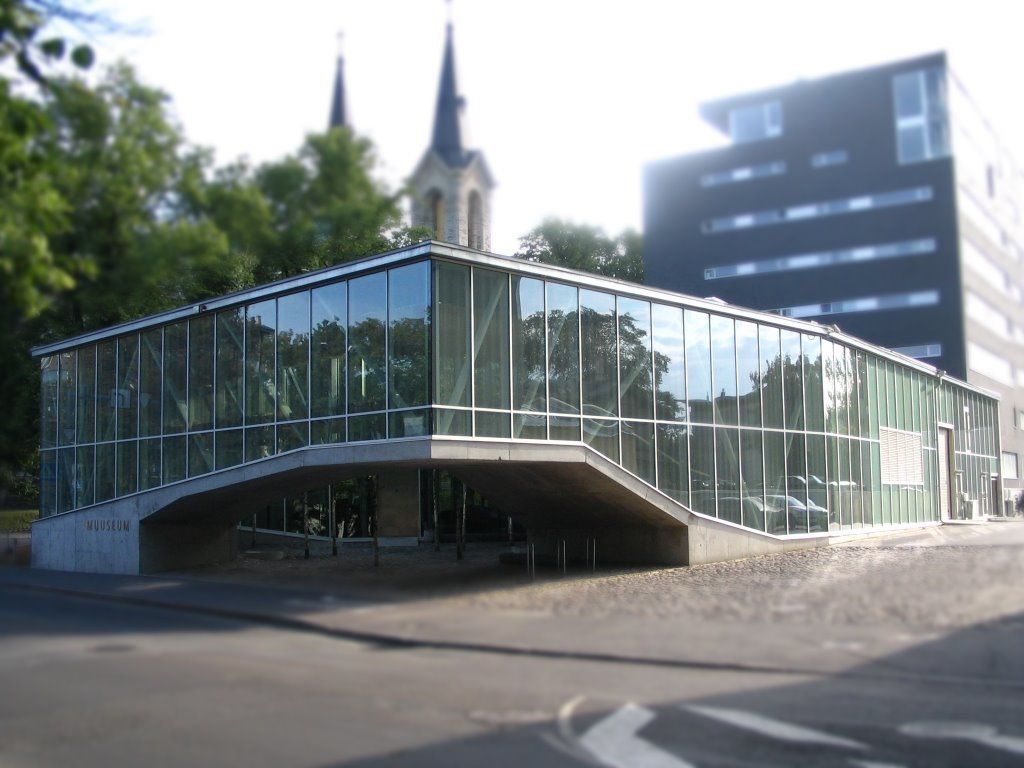 Museum of Occupations (Head Arhitektid OÜ and Tomomi Hayashi, 2003. Photo by Wikimedia Commons) – a fine example of the architect’s design and a reinforced concrete craftsmanship, on the edge of the Toompea Hill in Tallinn. To enter the museum, a visitor has to walk beneath the cantilevered part towards the centre of the building – by almost touching the low reinforced concrete ceiling with one’s head, it makes a symbolic introduction to the themes of repressions and imprisonment. 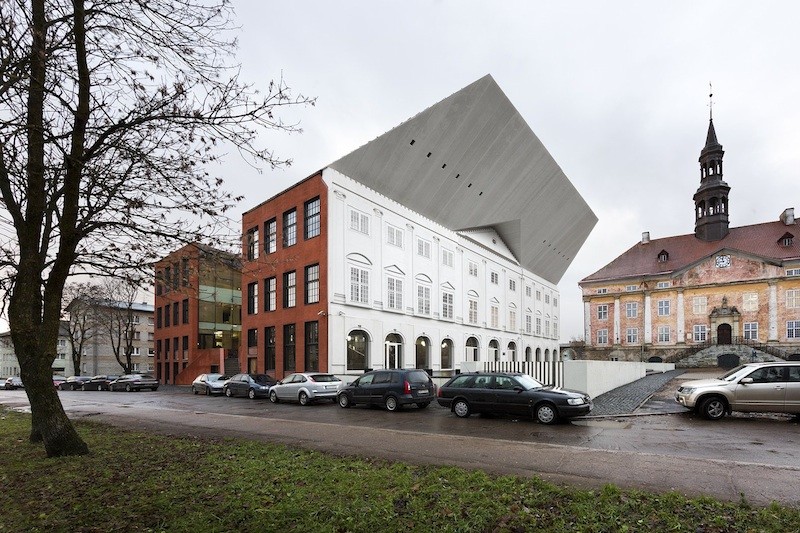 University of Narva College (KavaKava Architects, 2012. Photo by Kaido Haagen) – the new building reflects in a negative form the bombed-to-the-ground stock exchange building of Narva that was situated at just right next to the new college building – it is said that this building has a beak or an extending forehead. 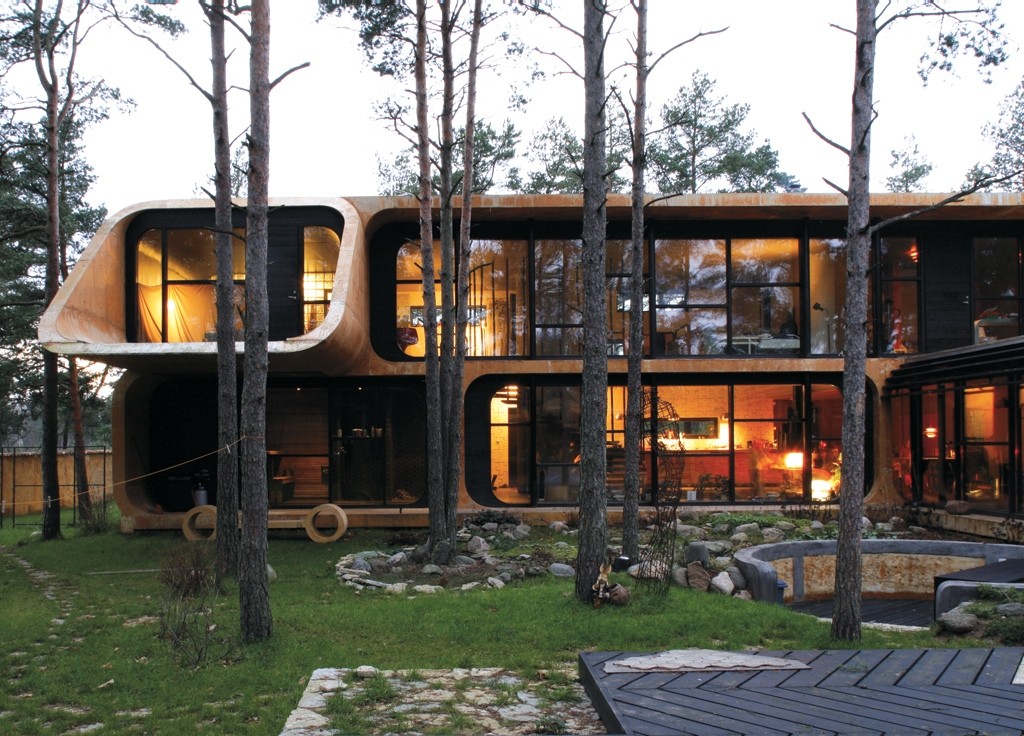 Villa U, private home (Front Architects – Indrek Unt, Gert Sarv, Lauri Laisaar, 2006. Photo by Ilmar Saabas) – a concrete masterpiece showing the versatility of style and application – the client had a personality and a budget that every architect once in a while needs. 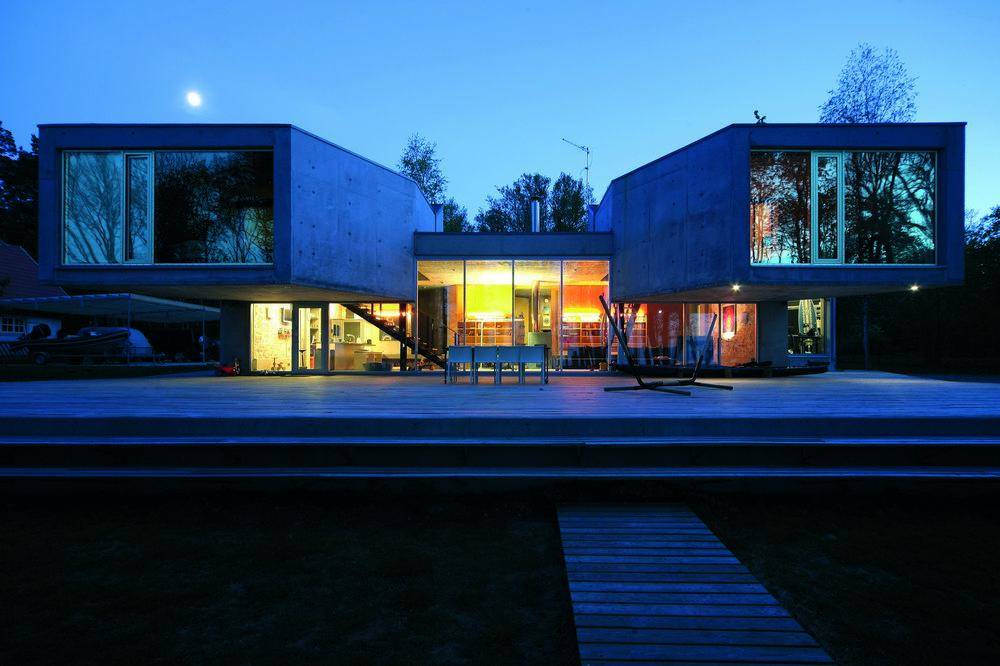 Villa Lokaator, private home in Paldiski (architects Indrek Peil and Siiri Vallner, 2007. Photo by Martin Siplane) – a villa inspired by a radio locator, it is symbolically presenting the past and the future: the history – a vibe reflecting the 50 years of stationed Soviet border guard units; and the future – the windows help (re)locate the positive directions into the future.

Laur Laanemaa is covering stories of architecture, construction, urban design and related fields through writings and photographs for a few magazines and newspapers in Estonian as well as English. Few inspirational years spent in Asia and Oceania has given him the chance to start to appreciate the cultural and culinary differences of the world. Besides roaming in megacities, he likes to clear his thoughts in pristine landscapes.