Singing with the Piedmont East Bay Children’s Choir has connected Tate Bissinger with numerous places in the world – from Slovakia to Germany. But on the weekend of 5-6 July 2014, singing connected her with something bigger and more powerful than anything she’d ever experienced.

It happened in Estonia – with a population the size of Hawaii – when the Alameda resident stood in a concert shell larger than a football field and raised her voice in harmony with 33,000 singers before 153,000 people to create a song she will never forget. Plus an experience of a lifetime.

“The sound was overwhelming,” said Bissinger, 16, of Alameda. “You want to smile and cry at the same time.”

Every five years, huge numbers of Estonians gather on one big stage along the Baltic Sea to sing for even bigger crowds in an event called Laulupidu.

Born in 1869 in times of national awakening during Tsarist Russia, of which Estonia was a part, Laulupidu has helped Estonians keep their identity in the face of 20th century occupation and oppression – first by the Soviet Union, then by Nazi Germany, and then again by the Soviet regime, becoming what Foreign Minister Urmas Paet on 6 July called “an organic part of our society”.

For almost 50 years, mostly Soviet songs made the programme of the event. And yet Estonians always found a way of singing their own songs. In 1989, something extraordinary happened. As perestroika was in the air, tens of thousands of Estonians rebelliously sang “Mu isamaa on minu arm”, or “Land of My Fathers, Land that I Love”, a nationalistic poem that composer Gustav Ernesaks had turned into a song in 1947, setting off a peaceful “singing revolution” that helped bring down communist rule in Estonia.

As Americans celebrated the Fourth of July weekend, Estonians gathered around singing for the 26th time. “Touched by Time, the Time to Touch” was the theme of the Laulupidu event that involved Bissinger and 45 other Piedmont East Bay Children’s Choir singers aged 13 through 18.

Emi Fogg will never forget singing Gustav Ernesaks’ “Land of My Father, Land That I Love”, when a crowd of tens of thousands stood up and, waving blue-white-and-black flags, joined in the singing.

“There is no other feeling like it; I can’t find any word for it,” said Fogg, a Concord resident who, wearing her Piedmont East Bay Children’s Choir blue T-shirt, was a blue dot in an ocean of colours and sounds. “To be singing with so many people with the same intention is just absolutely incredible.”

Only minutes before, Fogg – and the whole crowd – had remained silent. It was a way of remembering the Laulupidu of 1950, when the deportation of Estonians to the Soviet Siberia camps – mostly the cultural and political elite – was at its peak.

“Singing in Estonia is an expression of an entire country’s identity. To be in touch with that, to observe that it does have real power in many ways, not just to make you feel good, but to unify, to preserve a people’s identity, that’s unique.”

An accidental encounter at Heathrow Airport in 2000 made the California-Tallinn connection possible. The Piedmont choir singers were heading home after attending the Choir Olympics in Austria. They had time to kill, so they began singing. Soon another group joined them. The Estonian TV Girls’ Choir was also heading home, to Tallinn, after winning an international competition. Aarne Saluveer, the Estonian conductor, invited Robert Geary, the American conductor, to audition for Laulupidu. The Piedmont choir auditioned and made it, and before this year, performed in 2004 and 2009, becoming one of the few choirs from the United States at the Song Festival. 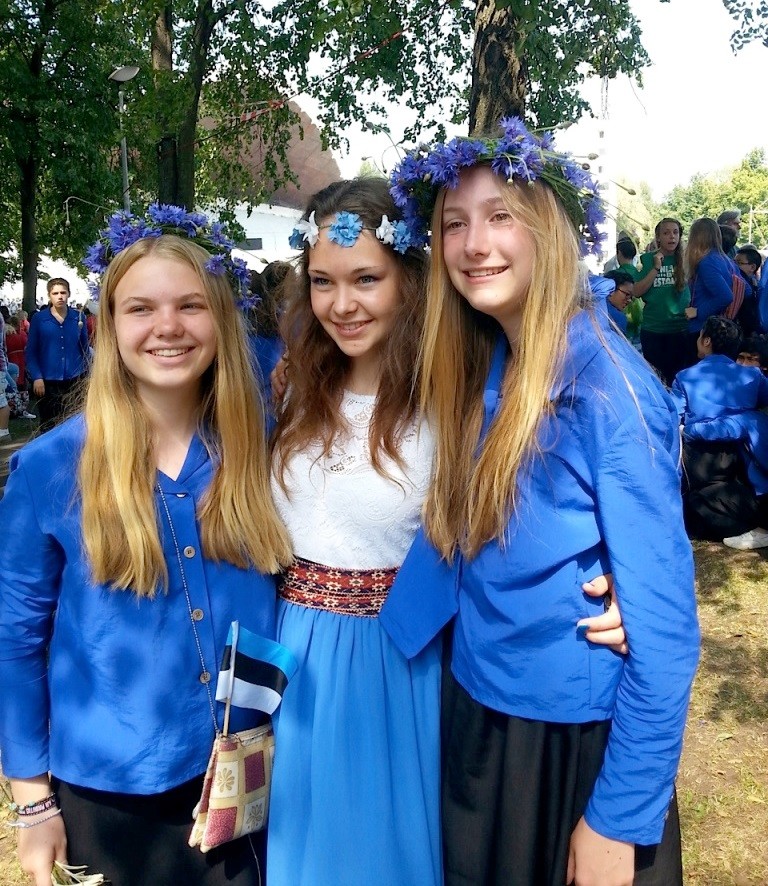 Geary, the choir’s artistic director, said Laulupidu has been a life-changing experience.

“How can a culture rise above the oppression and suffering it’s endured and sing?” Geary said.

Singing in Estonia is “an expression of an entire country’s identity”, Geary said. “To be in touch with that, to observe that it does have real power in many ways, not just to make you feel good, but to unify, to preserve a people’s identity, that’s unique.”

Bissinger said Laulupidu is unlike any other international event she’s ever attended.

“Here, you’re singing the words of other people and learning about their history,” she said.

It took a year for Piedmont choir children to get ready. That preparation involved twice-a-week rehearsals to learn the music of the songs, and to master the songs in a new language – Estonian.

Saimi Kint, a retired chemical physicist who was born in Estonia, helped the children with learning the language on a voluntary basis.

“They grasped the language partially because of their young age, their pronunciation was perfect,” Kint said. “But this event goes well beyond the singing part.”

“The Estonians sing, they make beautiful music for everybody to enjoy, they honour their past and remember how important it is to have your own culture.”

A big part of Kint’s job was to help the children with the history behind the songs. It is a history she lived herself: in 1944, her family fled the Soviet regime to Germany. And then they emigrated to the United States when she met her Estonian husband, whose father, Toni Kint, was president in exile of Estonia in Sweden.

“Estonian is so different from our own language,” said Elka Sorensen, 14, of Piedmont.

“Estonia is much smaller than many other very powerful countries, and yet through singing, they were able to rise up to reclaim their freedom. There was no violence. How they celebrate every five years is truly heart-wrenching.”

“I hope to help convey this important message, of freedom, liberty, everybody doing something as one country,” said Abigail Wilson, 14, of Piedmont. “The Estonians sing, they make beautiful music for everybody to enjoy, they honour their past and remember how important it is to have your own culture.”

Today, singing is no longer about fighting dictatorships. But singing remains a force, a “holy event between our minds”, said Saluveer of the Tallinn TV Girls’ Choir, who was in charge of the small children’s choirs at this year’s 33,000-strong Laulupidu choir. “It’s a place where all generations meet, where singers tell a story for the next generations.”

“I’ve been in big choirs, but there’s been nothing, but nothing, like this,” Wilson said. “The numbers is part of it. But the biggest part is how connected I feel to everybody in it.”

As the sun began to set on the Baltic Sea on the night of 5 July, the voices of the Piedmont East Bay Children’s Choir melted with those of a vast sea of people – singers and the audience.

This article was also published on San Jose Mercury News.