Back in 2000, two internationally famous choirs – the Piedmont East Bay Children’s Choir in Oakland, California and the Estonian TV Girls’ Choir in Tallinn, Estonia – met at Heathrow Airport. The young people were heading to their respective homes after competing in singing events in various parts of the globe. They had time to kill, and they started to sing. Thus was born a choral friendship spanning continents.

Aarne Saluveer, the Estonian conductor, invited Robert Geary, the American conductor, to audition for Estonia’s highly competitive Song Festival (Laulupidu), where tens of thousands of singers sing for an audience of hundreds of thousands every five years. The Piedmont Choir did. And made it. Twice, in 2004 and 2009, it was among the few foreign choirs at Laulupidu. How do young people – and young people who are not Estonian – perceive the unique Estonian event? That’s what a new documentary, made by the makers of The Singing Revolution, explores. To Breathe As One will air on American public television this weekend, only days before the 26th Song Festival gets Estonians together again. The Piedmont Choir will be there. For those who cannot make it to Laulupidu, watching To Breathe As One is a must.

Ali Matthews of Alameda, California, knew that it was going to be special. How she found out first when her choir, the East Bay Piedmont Children’s Choir, landed in Tallinn, and next when she stood in a concert shell larger than a football field before 100,000 people and, shoulder to shoulder, raised her voice in harmony with 30,000 Estonian singers to create a sound she will never forget. Plus an experience of a lifetime. “You couldn’t see the barrier between the audience and all the choirs,” the 11-year-old said. “It was surreal.”

“To Breathe As One” was the name of the event. On that day the title took on the power of its meaning.

Every five years, tens of thousands of Estonians gather on the same stage along the Baltic Sea to sing for a huge crowd. Born in 1869 as national awakening rose in czarist Russia, of which Estonia was a part, the Estonian Song Festival acted as a nation-building tool in the 19th century, a peaceful force against Soviet occupation in the 20th century, and remains a uniting force today. Many associate the festival with the Singing Revolution of the late 1980s, when hundreds of thousands of people flocked the streets to sing forbidden hymns in defiance of the Soviet occupation, helping the country gain its independence again in 1991. 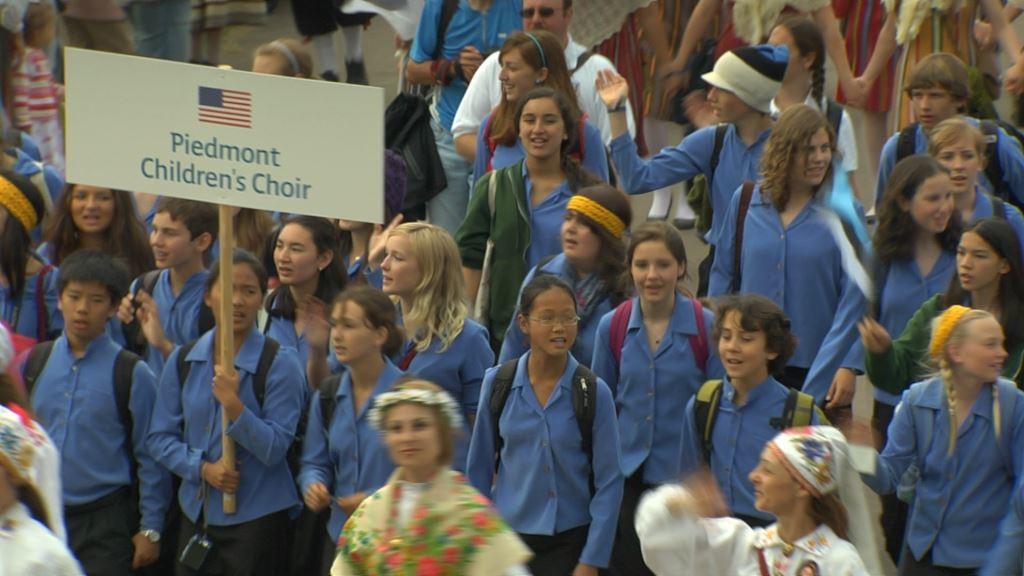 This is the event Matthews was a part of, back in 2009. It’s all captured on film, and she will be able to relive it and share her experience this weekend. A week later, on 5 and 6 July, the Estonian Song Festival will bring Estonians together for the 26th time. And the Piedmont East Bay Children’s Choir will be there.

To Breathe As One

It was To Breathe As One‘s American producers, James Tusty (whose father was born in Estonia) and Maureen Castle Tusty, who brought the Estonian singing event to the world with their world-acclaimed 2007 documentary The Singing Revolution. The film played in 125 North American markets and was cited by the New York Times as one of five “maverick” films changing the independent film industry.

To Breathe As One is also about Laulupidu‘s music legacy and historical meaning, but seen through the eyes of young Californians.

The film retraces the 36-member choir’s journey to the 2009 Laulupidu. It follows the singers as they arrive in Tallinn, become friends with members of Estonian TV Girls’ Choir, with whom they stay in Tallinn, and perform in what, for two days, becomes one of the world’s largest choral events.

How does it feel for a 13-year-old to plunge into the soul-soaring harmony of sound with one conductor, 30,000 singers,100,000 people listening?

Darren Fletcher of Oakland will never forget it – the people, the country, the history, the sheer size of the event and the sound. 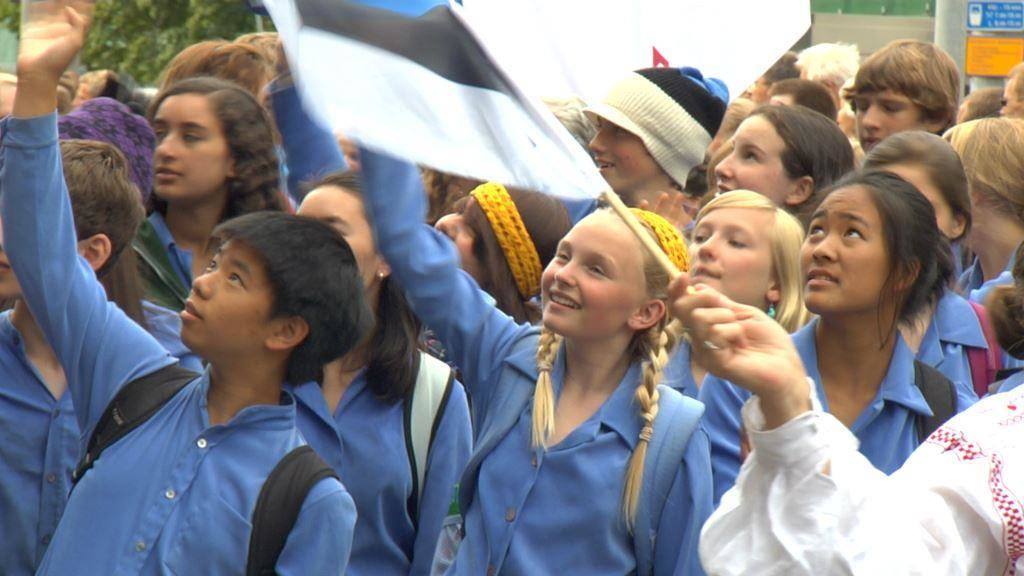 “It was surreal how singing just bonds people together,” Fletcher said. “No border, nothing. That’s what I truly love about this festival.”

“You feel like you’re Estonian even if you’re not,” added Joseph Starc.

To Breathe As One touches the heart, the mind, transporting the soul into an understanding to what breathing as one, singing as one, can mean today.

Singing in Estonia today is no longer about fighting dictatorships. “It’s a place where all generations meet, where singers tell a story for the next generations,” says Estonian TV Girls Choir conductor, who heads the children’s choirs at Laulupidu, which he calls a “holy event between our minds.”

“It’s not your voices singing, it is your mind,” Saluveer says. “The voice is just an instrument to express our mind.”

Marju Lauristin, one of the best-known forces of the Estonian independence movement who joined the European Parliament in April, says that having the voices of young people, as To Breathe As One does, is important. The film, she says, shows the power of the singing festival “as something that goes deeper than the influx of money”.

Laulupidu remains a way for small Estonia to assert its identity. “But it’s also about people gathering, doing something highly demanding together,” says Lauristin. “With choral singing you have training, you develop the ability to be sensitive to, and be in harmony with others. It is the collective pursuit of perfection.”

Please note that the film is aired on the PBS-owned World Channel that is not carried by all cable companies and is not available in all areas of the US. Please check your local TV listings.