EstDocs is an annual not-for-profit Estonian documentary film festival and competition held in Toronto, that presents stories from Estonia. Its mission is to provide a 360-degree perspective on Estonian history, politics, arts, culture, sport, and other subjects.

Established in 2005 and so far visited by over 10 000 film lovers, EstDocs has raised the profile of up-and-coming filmmakers and had the pleasure of featuring the country’s top internationally recognized filmmaking talent. All public screenings are either in English or have English subtitles. 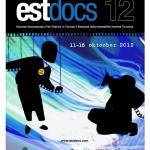 As EstDocs announces its 8th annual return to Toronto, this year also marks the 100th year anniversary of Estonian film. In spring, the occasion was commemorated around the Europe, so it came to EstDocs to invite cinephiles to celebrate the birth of Estonian cinema in Canada. The festival showcases North American premieres from Thursday October 11 to Tuesday October 16 in Toronto.

Canada is home to one of the largest Estonian populations outside Estonia. However, EstDocs audiences are not limited to people of Estonian heritage. The festival’s award-winning documentaries (all with English subtitles) appeal to film lovers of all backgrounds and ages. Keeping with tradition, certain screenings are preceded by a reception and followed by a provocative Q&A with the filmmakers.

“The films chosen for EstDocs are sure to provide you with a window into the heart and soul of our small country. Without the might of larger nations, Estonian self-reliance, tenacity and inventiveness has translated into unique perspectives on the world and how to thrive within it,” said Toomas Hendrik Ilves, President of Estonia. “As you view this year’s films, look for these traits in the characters and the stories they tell.”

“One hundred years later, Estonian cinema continues to bring such unique and transformative films to the world stage and I’m thrilled that EstDocs plays a role in shining a light on these distinctive documentaries,” said Ellen Valter, festival director of EstDocs. “Our festival is solely comprised of volunteer efforts; people who are passionate about providing audiences with the chance to view critically acclaimed films they would otherwise not have the opportunity to see in theatres here.”

For Estdocs 2012, award-winning Estonian producer Jaak Kilmi and director Jaan Tootsen present “New World”, awarded Estonia’s Best Film of 2011 by the Association of Estonian Film Critics. Also included in the line-up are “Outside the Sphere” by award-winning Canadian filmmaker Marcus Kolga, “Another Dimension” by Moonika Siimets, which caused quite a stir in homeland, and  “Playing on Water” – film about the renowned conductor Neeme Järvi. “Songs of the Ancient Sea” (trailer) by Rose-Marie Schneider and Erik Norkroos features renowned composer, Veljo Tormis’ journey from shamanism to modernism to uncover the roots behind ancient folk songs.