Toomas Hussar’s film Mushrooming will compete for an Academy Award in Best Foreign Film category at Oscars in 2013. The debut feature premiered at Karlovy Vary film festival, before also showing in Toronto International Film Festival. The story follows a politician who tries to take a break from work by mushroom picking, only to get lost in the wilderness while a media scandal is brewing. 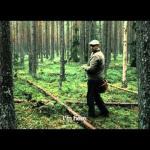 Since regaining independence in 1991, Estonia has been confronted with all manner of changes: new currencies, open borders, free markets, a free media. Toomas Hussar’s Mushrooming addresses the impact of the liberated media on Estonian politics, with frequently hilarious results.

Aadu (Raivo E. Tamm), a stodgy, middle-aged politician, is being rushed off to a television studio by his communications director, who seems more concerned with drying her nails than with her boss’ misgivings about his scheduled appearance. Yet Aadu isn’t nervous about going on TV to be grilled on policy: he’s actually on his way to take part in one of the country’s top game shows, “Hop and Jump”, which pits contestants against each other while seated on large, bouncing rubber balls. It will not be the only indignity he suffers. An ill-advised “traditional” day trip to pick mushrooms in the countryside with his wife, Viivi (Elina Reinold), is about to go horribly off the rails. Worse, a cynical reporter for a major daily newspaper is poring over Aadu’s expense reports.

Hussar’s satire is less about specific politics than the inanity of contemporary discourse, in which fame, no matter how fleeting, is the only thing that’s valued. (When Aadu’s small entourage runs afoul of an angry rural hermit, it isn’t because of what they stand for; it’s because they’re famous.) Of course, it doesn’t really matter how that fame is achieved. A farmer who recognizes Aadu is as impressed as if he’d just met a Nobel Prize winner — or maybe Brad Pitt. As a corollary, Hussar takes aim at our culture’s disinterest in — and growing lack of capacity for — thoughtful analysis or intelligent discussion, abandoned in favour of clichéd, sentimental posturing.

As the shaggy dog in this story, Aadu is a kind of anxiety-ridden Everyman for whom every experience, with the sole exception of nesting in his own house, is fraught with terror. Uncomfortable with the past, mortified by the present and terrified of the future, he’s a subversive and funny emblem of a country undergoing tremendous change, and of would-be shut-ins everywhere.