At the 55th international art biennale in Venice, Estonia is represented by the artist Dénes Farkas with the project “Evident in Advance”, curated by Adam Budak. 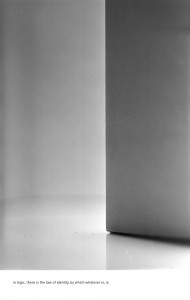 Dénes Farkas is a Tallinn-based post-conceptual photo artist, who has been focusing on social structures since the second half of the 2000s and presenting them in a laconic artistic expression, which unites photography and the photo caption. His works have been purchased to the collections of the Art Museum of Estonia, as well as by private individuals.

“Evident in Advance” deals with the elusiveness of language and the various aspects of translation and interpretation. In addition to Farkas, the project also involves an international team of architects and theorists, curated by Adam Budak, who works in Washington at the Hirshhorn Museum and Sculpture Garden. Budak and Farkas collaborated already in 2010 at KUMU’s Photography Month exhibition “Beyond”. Budak has curated several relevant international exhibitions, including “Architectures: Metastructures of Humanity, Morphic Strategies of Exposure”, which was displayed at the 2004 Venice Architecture Biennale in the Polish Pavilion.

Dénes Farkas was born in 1974 in Budapest, and lives and works in Tallinn, Estonia. He graduated from the Estonian Academy of Arts and has received the annual art prize from the Cultural Endowment of Estonia.

Farkas’s post-conceptual photo-based practice engineers the substructures of society at the moment it renews and remakes its identity. Using minimal means, the artist constructs cinematic spaces of contemplation, where the plot awaits its author and the characters are absent. Silent déjâ vu interiors with no apparent spatial hierarchy become the potential crime scenes of a representation in yet another crisis and decline. Farkas’s social geometry is a cartography of failure and dysfunction. His visually reduced, rebellious spectacle of language announces a new melancholy in a world in doubt.

The main curator of the 55th Venice Art Biennale is Massimiliano Gioni.

The Venice Biennale is the oldest and largest international art forum, and Estonia has participated since 1997. The Estonian Center for Contemporary Arts is the official representative of the country’s exposition at the Venice Biennale.