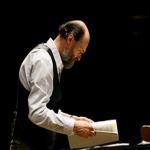 It was on 22 June 2010 that the Pärt family established the archive and research centre in Estonia in order to preserve the creative heritage of the composer. The IAPC was deliberately located in Laulasmaa, away from the city, and the building for the Centre is called ‘Alina’ — a name symbolising new beginnings —  after the piano piece ‘Für Alina’, which in 1976 introduced his tintinnabuli style.

Over the last three years, the IAPC has managed step-by-step to bring together much of the legacy connected to Arvo Pärt’s life and work, and this is still in the process of being organised and digitalised. The main task over the last year has been the completion of the Arvo Pärt Information System, which makes it possible to move on to the next big task — inserting the archival data. The process of preparing and developing a custom-designed database has been intense and time consuming, and its completion will continue throughout the data insertion process. The purpose of the Information System is to provide a complete overview of all the archival data at the IAPC including compositions, performances, recordings, media responses and much more, as well as to map connections between events and documents. For those interested, part of the Information System will be available internationally over the internet.

In the short period since it has been active, the IAPC has established and maintained good connections with other music organisations: it has become a member of the Estonian Music Information Centre and Estonian Music Council, collaborated with a number of festivals, organised exhibitions, and released the DVD ‘Playing Pärt’ in collaboration with the Collegium Educationis Revaliae school and the CD ‘Vater unser’ with Estonian Record Productions. The annual film days organised by the IAPC at St Catherine’s Dominican Monastery have also been warmly received by audiences and will therefore certainly continue. Plans for the near future involve a lecture series in the upcoming academic year by Viennese musicologist Leopold Brauneiss at the Estonian Academy of Music and Theatre, collaboration with the “Mozartwoche” festival in Salzburg and much more.

In the more distant future, the extended archives will also be open to musicologists, researchers and other interested parties. Preparations for planning the design for a new building for the centre are also in process. In architectural terms, it is intended that the new centre will focus on the content of Arvo Pärt’s work, but its heart will continue to be the archive.