“Urbanisation is a global mega-trend. During the past decades, millions of people have moved to live in big cities or to the proximity of big cities. The suburban regions grow geographically, challenging the infrastructure, especially transportation network, and stressing the environment, which might lead to undesirable results in case of poor planning and regulation. In order to make informed decisions about future developments accurate and timely information about the current situation, past dynamics and on-going trends is essential,“ said the head of the project, Kaupo Voormansik. 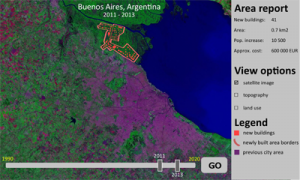 The planned service will offer high-resolution global urban development information based on data from the radar satellite Sentinel-1. The emphasis is on fine temporal dynamics mapping – the possibility to extract changes with less than one-month time steps, which makes it the fastest, freshest and most robust information source on urban developments. Anonymous mobile location based services (LBS) data will be used for estimating the population and detecting abandoned city blocks.

The recognition means a lot to the team and to different parties, and shows Estonian research facilities as competence centres of the field. “In cooperation with the University of Tartu, Tartu Observatory and Regio AS, Estonia is becoming the development centre of radar satellite applications which is also demonstrated by the received recognition,” Voormansik asserted.

The Copernicus Masters innovation competition was initiated by the European Space Agency (ESA), the Bavarian Ministry of Economic Affairs, the German Aerospace Centre (DLR) and T-Systems in 2011 with endorsement of the European Commission.