Despite the fact that 23-year-old Nikita, born into a Russian-speaking family in Estonia, speaks fluent Estonian, studied for his bachelor’s degree in Estonian, served in the country’s military and holds an Estonian passport, he still feels unwelcome in Estonia.

A new project within the EU-Russia studies programme at the University of Tartu analyses personal stories that are based on people’s experience of living in Estonia.

The project is aimed at describing the multicultural society within Estonia – identities and integration in the Estonian cultural and political society. The goal is to collect a wide range of stories about non-native residents who call Estonia their home – individuals with diverse backgrounds who live, work or study in the country.

There is one thing common, however – they all claim some form of Estonian identity: be it national or cultural. These groups include, for example, the young generation of Russians, business professionals or academic individuals who may struggle with their identity and integration into Estonian society. The master’s students at the programme have now conducted 30 interviews. Over the coming months, Estonian World will publish a number of these personal stories to give our readers hindsight of people’s lives.

The first story comes from 23-year-old Nikita, who was born into a Russian-speaking family in Kohtla-Järve, a town in northeastern Estonia. His father was born in Estonia, however his parents met each other while studying medicine in the city of Petrozavodsk in Russia, and eventually moved to Estonia. Being born and raised in Estonia, he is deeply attached to his motherland. However, from time to time he feels unwelcomed here and he does not like to discuss it.

The only Russian in the group

I graduated from a Russian school and grew up surrounded by Russian speakers. So, of course, I soaked up some values and views from Russian culture and literature. However, when my parents divorced, my mother married an Estonian man, so I spoke the language with him and my skills were improving.

As a kid, I spent a lot of time in a remote village in southern Estonia, where our relatives live. They do not speak any Russian there. So, little by little I overcame the language barrier and began to speak Estonian. I also started watching movies and reading books in the Estonian language more often. In high school, the language programme they taught was not sufficient by itself. Yet before graduation, I passed the state language proficiency test at the highest level. So after school, I was able to apply for the Tallinn University of Technology, where I was the only Russian in the group.

A deep divide between Estonians and Russians

I think our country has a deep divide between Estonians and Russians. Those who do not speak the state language are not accepted and remain isolated from the Estonian society. Many are not able to work or find a profession. The penalty for not knowing Estonian, while working in the public service, can be a fine or even losing your job. For example, my Russian language and literature teacher in school was fired for not having an Estonian language certificate. My mother used to pay the fine, but she tried hard to learn the language and passed the state exam. But for those who have worked using only Russian for most of their lifetime, it is a big challenge to pass the Estonian language test at a sufficient level. 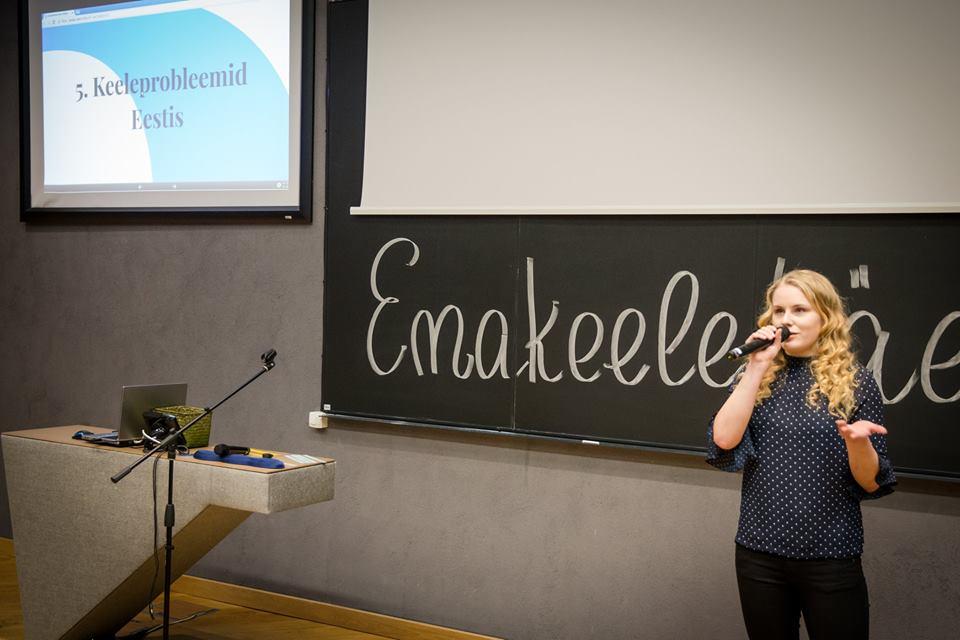 The ability to speak the state language is one of the most important steps of integration that we, as Russian speakers, have not fully overcome yet. If a kid is born in Estonia, it does not automatically mean they will start speaking perfect Estonian, which is one of the hardest languages to learn. For some, speaking Russian is enough. Most of those from the northwestern part of the country live in Russian-speaking communities, consuming media, working and studying in Russian, so they do not really have any motivation to learn Estonian. A lot of my former classmates and friends speak a little Estonian so they can express themselves in a grocery store, but would hardly be able to read a book or watch a movie in Estonian.

I believe that learning the state language should be mandatory. I’ve visited different places and witnessed how migrants commit themselves to study the language of their new home country. But one thing is important to distinguish is when people change their country following their own choice, since it is an entirely different thing being a native resident and just happening to grow up speaking a different language.

Speaking Estonian is not yet a guarantee

Speaking the state language is not yet a guarantee to be fully integrated into Estonian society. Some public statements by our politicians are calling the Russian speaking population migrants and the Russian language as a language of occupiers. This might touch upon national feelings having negative consequences on integration and widen the gap between the two communities. It once again shows that Russian speakers cannot be fully accepted and accommodated into the Estonian society.

My generation is full of people without a motherland. I do not feel myself either Russian or Estonian. Estonia is my home country, the place where I was born, where my parents have lived for most of their life. But my country does not accept me. I’m not Russian either, because in order to be one I should consider Russia as my motherland. But, Russia is a foreign country for me. I have never lived there, do not possess a Russian passport, and do not know much about the place. The only link to Russia that I have is language and culture.

In a way, I fall somewhere in-between these two nationalities and cultures. I consider myself as a Russian-speaking Estonian. There is a big difference between Russians and Estonians here, but at the same time there is a discrepancy between people in Russia and Russian speakers in Estonia.

Giving up the Russian language and culture

Sometimes I feel unwelcome in the Estonian community. Despite the fact that I speak fluent Estonian, I studied for my bachelor’s degree in Estonian, served in the military here and hold an Estonian passport, I have noticed that people may avoid having an interaction with me if they have an ethnic Estonian as an alternative.

I think to be fully accepted, society expects us to give up the Russian language and culture because one’s native language to some extent determines the way you perceive the world around you. Quite often I feel more comfortable among Russian speakers, because I’m equal among them, while in the Estonian community I remain a foreigner.

Cover: Distribution of the Russian language in Estonia according to data from the 2000 Estonian census. Please note that Nikita didn’t want to publish an image of himself or disclose his surname in public. Johan Skytte Institute of the University of Tartu and Estonian World have verified his identity and story.

33 thoughts on “Born in Kohtla-Järve: I do not feel either Russian or Estonian”