While the first Estonian who was declared a saint was a Buddhist, this religion also provided a way of resistance for some Estonian intellectuals during the Soviet occupation.

Although pretty impressive, a history of Buddhism in Estonia, and in the Western world in general, is only a fraction in the history of it. The origins of the religion date back to the 6th to 5th century BC, to India, where Prince Siddharta Gautama was thinking about the meaning of life under a Bodhi tree – and realised it’s to remove suffering from human life.

Western scientists started to show deeper interest in it only in the 19th century. 1960-1970s brought about a rebirth (or was it a reincarnation?) of Buddhism in the West, thanks to beatniks and hippies; the religion was a suitable tool to express their opposition to the system and reach out for the eternal and imperceptible.

What follows is a brief overview of the history of Buddhism in Estonia.

Buddhism was brought to Estonia at the beginning of 20th century, by a man called Karl Tõnisson (1882-1962), known also as “barefoot Tõnisson” or Brother Vahindra. His actions have embedded him in the history of Buddhism in Estonia and, as a matter of fact, the world – he was one of the very first Westerners embarking on the Buddhist faith as a monk.

Born in the small Estonian town, Põltsamaa, Tõnisson embraced the faith sometime at the turn of the century. He was a colourful and eccentric figure and was not taken seriously at the time – he could be seen forecasting a gloomy future for the country and the people at the marketplaces and was regarded as fool.

At some point, Brother Vahindra left Estonia for the neighbouring Latvia and became a citizen over there, known as “Karlis Tennisons”. He had a Buddhist temple in the Latvian capital, Riga, and was designated the first Buddhist Archbishop of Estonia, Latvia and Lithuania by the thirteenth Dalai Lama.

In the beginning of the 1930s, Brother Vahindra travelled to Asia with his only devoted disciple, Friedrich Lustig (1912-1989), and never to return to homeland. He was the first Estonian to visit Lhasa, the capital of Tibet, which was a rare event in that time – only devoted Buddhists were permitted into the city.

Brother Vahindra ultimately settled in Yangon (then known as Rangoon), Myanmar (then known as Burma), where he was much respected. After he died in a temple in 1962, he was declared a bodhisattva – in Buddhism, a bodhisattva is like a saint in Christianity, a spiritually-evolved person.

Thus, the first Estonian declared a saint was a Buddhist.

Namedropping up to the present day

Although not the first herald of Buddhism, Brother Vahindra certainly was the most colourful of Estonian Buddhists. Maybe it’s partly thanks to him that Uku Masing (1909-1985), an Estonian philosopher, picked up the torch and started his own exploration into Buddhism which resulted in series of lectures and a book – “Budismist” (“About Buddhism”). 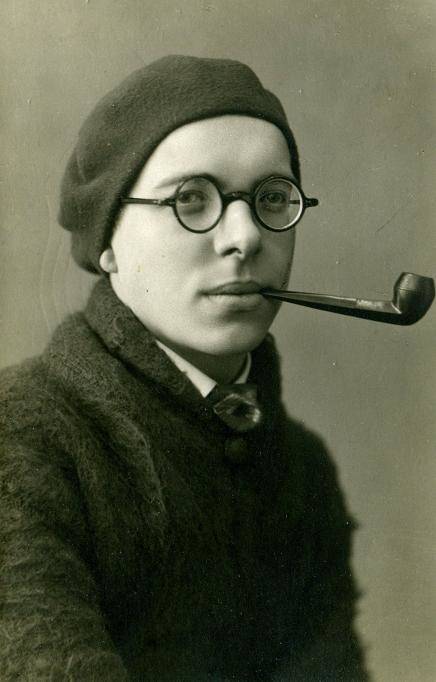 Masing, although not as mythical as Brother Vahindra, is still a worthy counterpart to him – what he lacked in bravado and splendour, he made up for with encyclopaedic knowledge and volume.

He was also a founding member of the Estonian Oriental Society in 1935. The society had to shut down after the Soviet Union invaded Estonia in 1940, but was re-established in 1988. Luckily, another member of the society, polyglot and orientalist Pent Nurmekund (1906-1996), managed to establish the Chair of Oriental Studies at the University of Tartu in 1955.

The academic chair nourished another heavy-weight figure in the Estonian Buddhist scene – Linnart Mäll, who started his studies there in the 1960s.

Mäll (1938-2010) was Masing’s student and became a teacher for many future Estonian buddhologists – he translated many Buddhism’s basic texts into Estonian.

Thanks to Mäll, it’s relatively easy to become a Buddhist in Estonia – the texts underlying theology (if such a word may be used for Buddhism) are available in the native language and with a solid commentary – three tomes of “Budismi pühad raamatud” (“The Sacred Books of Buddhism”), published in 2004-2008.

Thus, the now quite settled Buddhist community in Estonia stands on the shoulders of some prominent giants – these were all outstanding members of Estonian academia and the society alike.

Resistance to the regime

“Way of resistance” can be said about Buddhism in Soviet Estonia, too. The Soviet era marked the cessation of most religious practices and education in the country. Christian denominations maintained their activity on a much smaller scale, membership of other religious communities dwindled remarkably.

On the one hand, this situation was a perfect seedbed for emergence of religious and/or intellectual luminaries to attract eager satellites to gather around them. Continuity of previous traditions depended completely on the “right” people in “right” places: bravery and aptitude alike were needed for engrossing in to an unfamiliar cultural and religious concept (curiously enough, this is still valid while living in the free world).

Concurrency of intellectual interest and religious devotion was an important precondition for a viable religious movement to start. There was also a certain amount of political finesse – for example, when Linnart Mäll was not allowed to work at the University of Tartu as a scientist; he was given a post of “engineer at the chair of Oriental Studies”. “Buddhism and dissidence were synonyms in the eyes of the state organs,” Mäll later said.

Buddhist resistance to the Soviet occupation of Estonia was a peaceful one, of course, in accordance to basic religious principles – Buddhist texts and contemplation instead of battle-axes and wrath. Paradoxically enough, this emphasis on the academic approach created a slight friction between the scientists – theoreticians and the believers – practitioners. The latter were called “village mystics” by the former (so much better than “village idiots”, right?).

There was also a group called the Estonian Buddhist Brotherhood – also known by its nickname, Taola – that was established under the guidance of Vello Väärtnõu in 1982 in Tallinn.

The brotherhood operated as a self-funding organisation, while its members worked as boilermen – common among the resistant intelligentsia during the Soviet time. Each of them was specialised in a different field of Buddhist studies and the idea was to spread the religion’s way of thinking among Estonians. 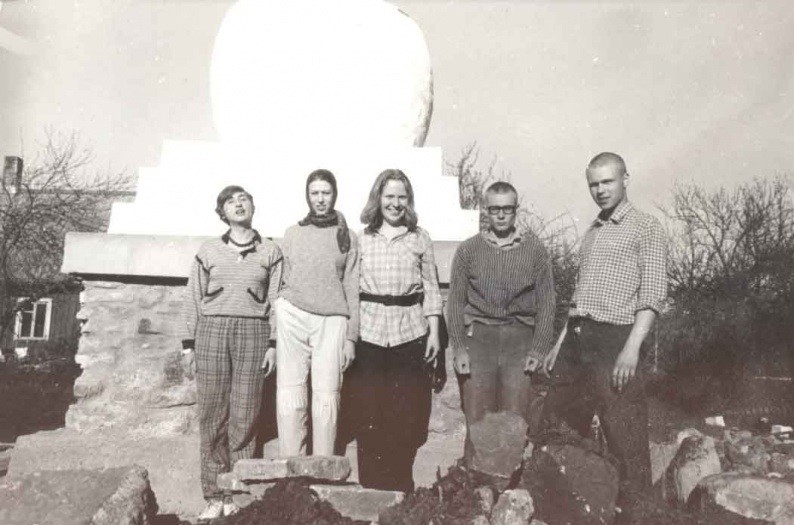 Members of the Taola also had very intensive relations with the Ivolga monastery in Buriatya (a Russian republic in Siberia) – they visited the monastery on several occasions and talked with elderly lamas, who, in turn, visited Estonia. 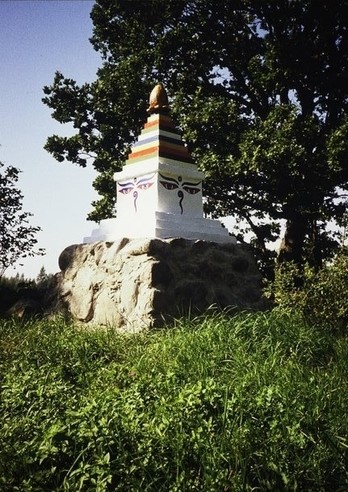 Taola members also built the first stupa in Estonia – in artist Jüri Arrak’s summerhouse at Pangarehe. Three more stupas followed and were built from 1984-1985 in Tuuru village in western Estonia.

Taola was under constant surveillance by the KGB, the Soviet internal secret service – the Buddhist library was “cleaned” on several occasions and large amounts of Tibetan texts, tankas, slides and reels of tibetan manuscripts were confiscated from Väärtnõu.

He was eventually deported from the country in 1988 – three years before Estonia regained independence – which effectively ended the successful activities of the Estonian Buddhist Brotherhood.

Our ignorance towards all kinds of religious matters has given way to numerous conspiracy theories and esoteric interpretations, most of which usually lack both depth and grip. It’s easy to put up a spiritual system for the people who have no means to oppose to it or no adequate foreknowledge to evaluate it against.

Make no mistake: Buddhism is no easy way out for posers. It’s a religion. Despite of its seemingly lax structure (keyword: “seemingly”; which takes us back to our defective religious education) and lenient image there are a hierarchy, stipulations and requirements to consider and follow. It’s about decision and devotion – make up your mind and then stay on the chosen path – above everything else. 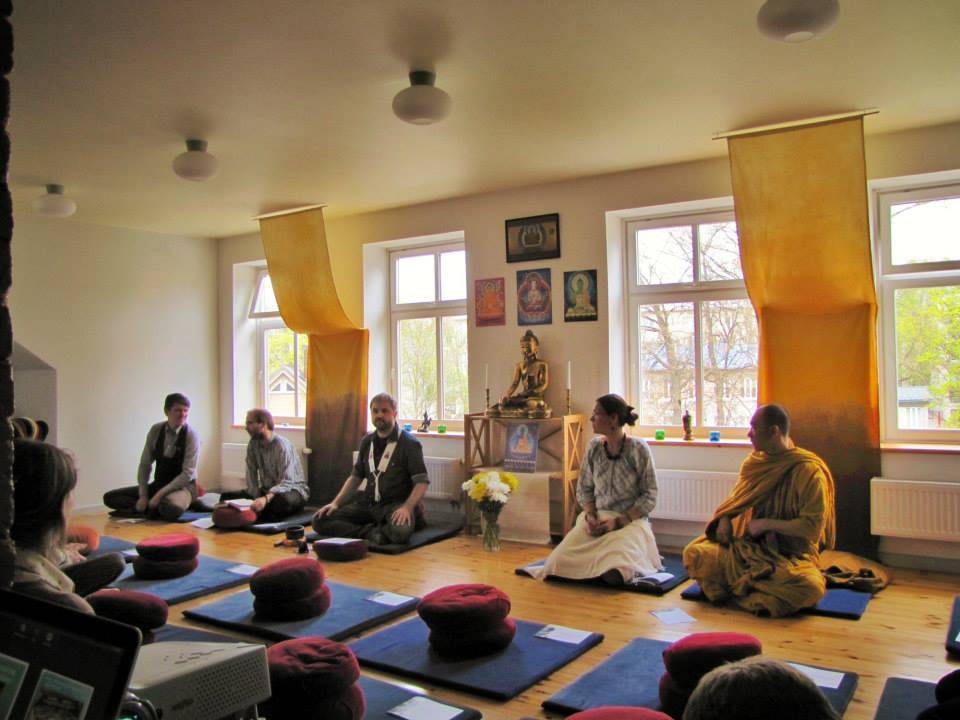 In the 2011 census, 1,145 people in Estonia defined themselves as Buddhists. However, this indicates how many people consider themselves Buddhist and not the number of members in Buddhist communities (or congregations). The latter is estimated to be about five times smaller.

But the number of people who attend to Buddhists meditation nights certainly is several times bigger than 1,145. This is probably an expression of a phenomenon that Estonians don’t like to determine themselves as being anything too eagerly. And then there is a more universal concept of convenience believers.

What do we actually know about Buddhism? 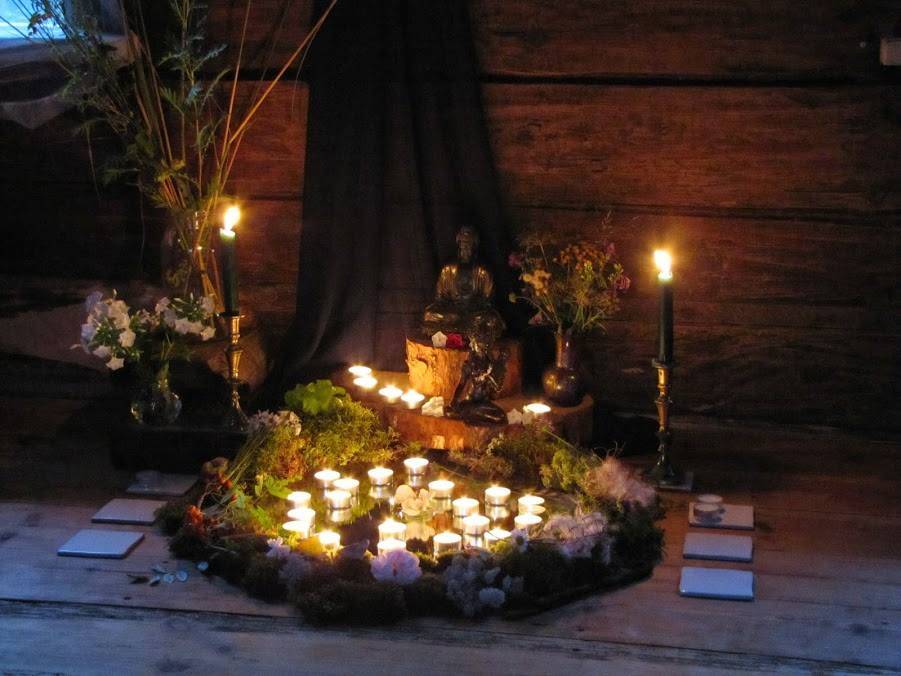 This writer has always remembered Buddhism by numbers 3, 4 and 8.

Three precious jewels: Buddha (the teacher, the Awakened One), dharma (the teaching), and sangha (community). Four noble truths: there is suffering in this world; there are reasons for human suffering – human body, yearning for pleasure and illusions; to get rid of suffering means to get rid of yearnings and desires; in order to reach a state without suffering one must embark upon the eightfold path. Eightfold path involves being a wise, ethical human being. Makes sense, right?

Logic and rationality may be a bit surprising characteristics for a “spiritual” movement, but I believe that’s what attracted Estonians about Buddhism during the Soviet era, in particular, and continues to do so now.

Cover: Three stupas in Tuuru village in western Estonia, built by the members of Taola movement (courtesy of www.estoniannyingmaencyclopedia.com)

Kadri Metsma is a trained theologian (Master of Theology, University of Tartu). For now, she has turned away from celestial spheres to wonder about the Big Surprising – our mundane life, on Earth and in Estonia, in particular.

3 thoughts on “Buddhism in Estonia: a brief history”