The charity concerts held in Estonia last week raised money to buy first-aid kits for Ukraine, as well as a piano for the children of Sloviansk.

When the phone call came in September, Olena Syzonova, the assistant director of a fine arts school in the southern Ukrainian city of Sloviansk, thought it was a joke. Then she broke into tears.

In April, the siege of her city had marked the beginning of the war in eastern Ukraine. But now that, along with the port of Mariupol, Sloviansk was among few places not controlled by pro-Russian separatist forces, Syzonova was scrambling to go back to normal life, reopen her school so her 600 pupils could sing and play the piano again after three months of war.

Bomb waves had shattered windows and damaged the roof. With the deafening sound of construction work in the background, Syzonova barely heard the voice on the phone. Aivar Mäe was the man’s name. He said he was the manager of the Estonian National Opera in Tallinn, and that he wanted to give her school a brand new concert piano.

“If it’s joke, then it’s a bad one,” Syzonova recalls telling the man.

But it wasn’t a joke. Estonians wanted to help the children of Sloviansk. Together with one of the Opera’s soloists, whose siblings still live in Ukraine’s eastern Donetsk, Mäe had identified her school as the place to support, Syzonova says Mäe told her. The school director burst into tears. “It was too far off from reality, she recalls. A major concern was to fight for every penny she could so the school’s windows would close when school started again. It was surreal.” 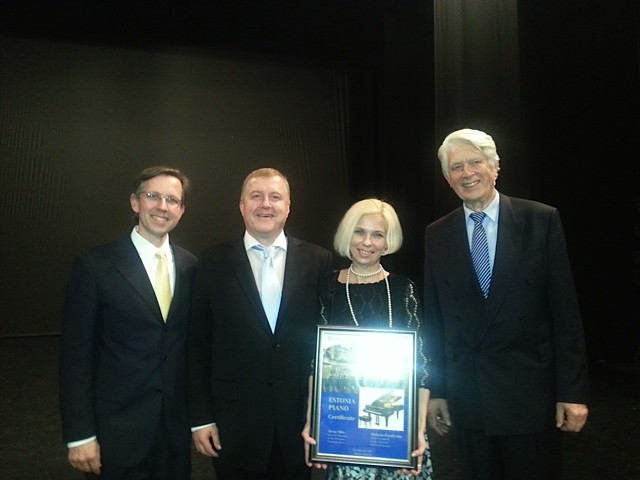 On Monday, a shy, self-effaced, visibly moved Syzonova walked up the stage of the Estonia National Opera to receive a voucher for an Estonia piano, the instrument hand-crafted in the Estonian capital, during a fundraising concert that had soloists and musicians of the Estonian and Ukrainian national operas perform shoulder to shoulder (Estonian Air paid for the Ukrainian artists’ trips, and so far more than €27,000 have been raised.) The concert was one of three charity concerts held in Estonia last week. On Tuesday, Estonian music legend Tõnis Mägi and Oleksandr Larmola of the Ukrainian rock band Haydamaky lent their voices to Ukraine at a concert at Nordea Concert House that so far has raised more than €200,000. The money will go toward buying first-aid kits, said Lt Gen Johannes Kert, former commander of the Estonian Defence Forces, whose non-profit organisation, “Free Ukraine”, initiated the concert. Kert called the performers that night his “army of musicians”. Donations can still be made for both initiatives.

Few countries have been as emotionally touched by the Ukrainian conflict as Estonia, which also shares a border with Russia, even if the emotions of the country’s Estonian and Russian-speakers have tended to come out differently But as Ukrainians are scrambling to get on with their daily lives, Estonians are throwing their weight around the people of Ukraine in a very concrete way.

“They’re our most active supporters. Because they lived the end of the Soviet Union, they understand the dangers if Ukraine is taken over by Russia,” Viktor Kryzhanivsky, Ukraine’s ambassador to Estonia, said. “And it’s not only through music. They also help with technical assistance and they cure our wounded – their help is very concrete.” 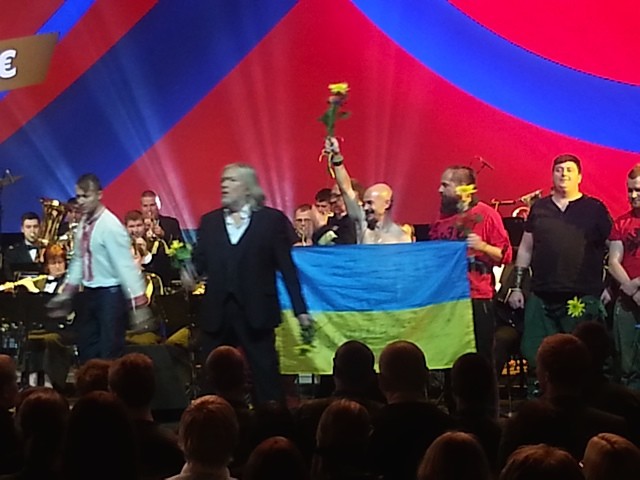 The International Monetary Fund has committed to helping Ukraine with a bailout of a least US$17 billion. But for people in Sloviansk, who live some 25 miles (40 kilometres) from the front line and  still in the uncertainty of what will happen tomorrow, the donation of an Estonian piano is a small, but hugely symbolic gesture.

In fact, symbolism played a big role in the way the Estonian National Opera chose to express its solidarity toward Ukraine. “We were pretty sure that our support should be connected to culture, to music,” Mäe said. Brainstorming with Ukrainian soloist Pavlo Balakin, who was born and raised in Donetsk, the two chose to focus on Sloviansk, because the conflict started there, and on the Estonia piano which, in Soviet times, had supplied all Soviet republics with concert pianos, because it symbolised the country. Piano was the heart of Olena Syzonova’s school, yet there was only one Estonia piano there, back from the late 1970s. Estonians would give Sloviansk an Estonia Concert Grand, the company’s newest model.

“The piano looks nice but the sound is poor, and the older children aren’t allowed to play on it,” Mäe said of the Sloviansk School of Fine Art’s current piano. “Now this new piano is targeted for children not just to play occasionally but to play on it every day, to keep it alive.”

People wishing to support the piano project can make a money transfer to the bank account of the Estonian National Opera until 1 December. Account: EE351010002011259003. Keyword: “Ukraine”

1 thought on “Estonia for Ukraine: fundraising concerts raise over €200,000”