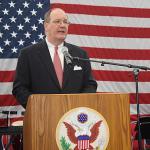 A U.S. ambassador returned home after decades abroad to disappointingly observe that his country was less technologically developed than one of Europe’s smallest states kept for decades behind the Iron Curtain.

Michael C. Polt is back in the U.S. after a 35-year diplomatic career. He most recently served as the U.S. ambassador to Estonia, where documents are signed electronically and wireless Internet is available almost everywhere, for free.

“So I did spend two and a half hours at my local Department of Motor Vehicles (DMV) in order to get my car license plates – something I should have been able to do by inserting my ID card into a license plate vending machine similar to an ATM in about 2 minutes,” Mr. Polt wrote in his blog. “Of course my gripe is not simply about waiting in line for a government service or even slow or expensive Internet access. It is my concern that what should be America’s leadership as a modern, agile, and innovative society is in a bit of a rut.“

Mr. Polt says that government services in the U.S. are much more old-fashioned than they should be in the 21st century and argues that in Estonia people have a comfortable relationship with their government because they spend very little time dealing with bureaucracy.

“Most services can be obtained sitting in a comfortable easy chair at home with a laptop, tablet or smartphone, while enjoying a favorite beverage,” Mr. Polt wrote. When returning to the U.S., he experienced that Internet access is slower and more expensive.

“In Estonia, broadband wireless access throughout the country—at little or no cost—is a given,” he wrote. “Internet is a utility, as universally available and affordable as water, electricity and indoor plumbing. We still grit our teeth paying a hefty charge for slow Internet access in top hotels in the country that invented the Internet!”

When talking about cyber security, Mr. Polt admits it is a difficult subject in the U.S. because people feel uncomfortable even thinking about a “national ID card” and a government-run database of people, both of which exist in Estonia.

“I readily share our wariness of ‘big brother’. But I have concluded that big brother already exists in multiple databases that all too readily share information to make big brother larger and more unpredictable than any single, user monitored and legally secured personal identity system would,” Mr. Polt wrote. “My friends in Estonia repeatedly demonstrated to me the utility of their ID cards as well as the electronic fingerprints they were able to monitor of those who had accessed their data, including even the police.”

This article was first published by Wall Street Journal: http://blogs.wsj.com/emergingeurope/2012/10/22/for-u-s-diplomat-culture-shock-after-estonia-stint/

Pictures: VisitEstonia and US Embassy in Tallinn