Last winter designer and start-up entrepreneur Liis Peetermann spent 6 months in Chilean capital Santiago, taking part of Start-Up Chile program, which is an initiative of the Chilean Government to attract foreign entrepreneurial talent into their country. This was Liis’s first impression of Santiago at the time:

It’s warm. +30C during the day, only because it’s summer. At the same time it’s a winter in Estonia and the pipes are freezing over there – I miss everything else, but I am glad to skip this fun…

It’s noisy. There are around 6 million people living in this city. So it’s kinda like New York. It means noise.

It’s smoky. Everybody is smoking. I just can’t believe how many people can smoke in here. From a teenager to a grandma.

It’s trashy. Well ok, I haven’t been to other Latin American countries, but if in some countries trash is in some ways a part of the natural habitat, then in here it’s a part of a pure laziness. How lazy can you possibly be that you spend the whole afternoon lying in the park and are too tired to throw all the garbage to the trash bin after? Makes no sense, right – because someone will come and pick it up in the morning anyway…

It’s full of abandoned dogs. They’re everywhere – sleeping on the street, hanging in the parks, barking all night long. And of course jumping on top of me every time I do my exercises in the park. They’re mostly friendly, but for me it says a lot about the community if these things are considered normal. Or maybe they’ve always been here and it IS normal? How come the city isn’t yet drown in dogs then?

It’s surrounded by mountains. Extremely nice. Especially in the sunset.

It’s like a real summer. For example, I have a pool on my rooftop – how much more summer can it get?

It’s unhealthy. People eat a lot of crap – fast food, street food, white bread etc. They also don’t exercise much and are in a quite bad shape in general.
Pisco sour tastes good. Pisco is a grape brandy, the most popular drink in here. Strong but good.

It’s full of taxis. And the taxi is cheap.

And the people are friendly. Especially the locals when you say you don’t understand much in Spanish. 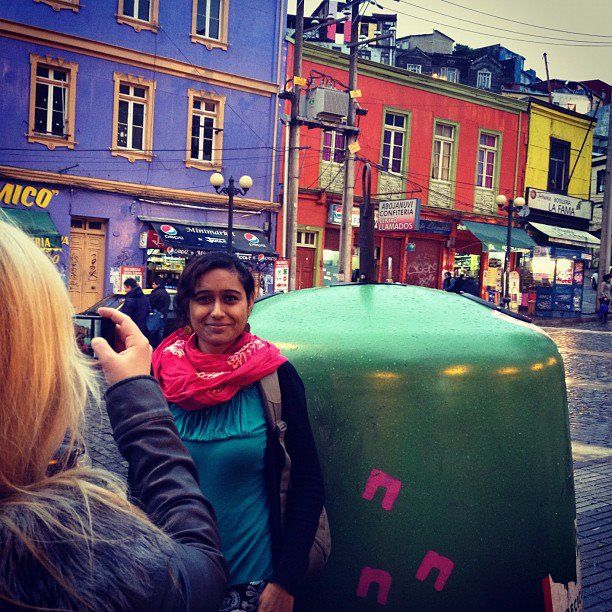 So don’t get me wrong. I really like Santiago and I enjoy my time in here. But guess I’m just a bit “spoiled” with the crazily busy New York, plus well-structured and hard-working tiny Estonia…

Liis Peetermann is a designer.