Nearly 800 competitors from 16 countries in 188 teams visited 19 saunas around one Estonian town on 2 February for the European Sauna Marathon 2019.

It was the biggest and craziest competition in its 10-year history, as well as the most high tech.

The registration began at 9am with queues stretching down the snow-covered street until noon in Estonia’s winter capital of Otepää. Once inside, each team was given a wrist band with a tracking chip and instructions to download a mobile app with a map of saunas across the area that they had to visit.

“Who is the most experienced person in your team with saunas?” asked one of the organisers sat behind a desk. My team mates pointed to me, so she strapped a tracking chip around my wrist. “OK,” she smiled. “So, you can keep on going if the others pass out.”

Competitors must spend three minutes in each leiliruum (hot room) and each tünnisaun (wood-fired hot tub) and nominate at least one team member to jump in each ice hole  –  and must try to remember to check in and out using their new wristbands unless they want to do half the course over again. 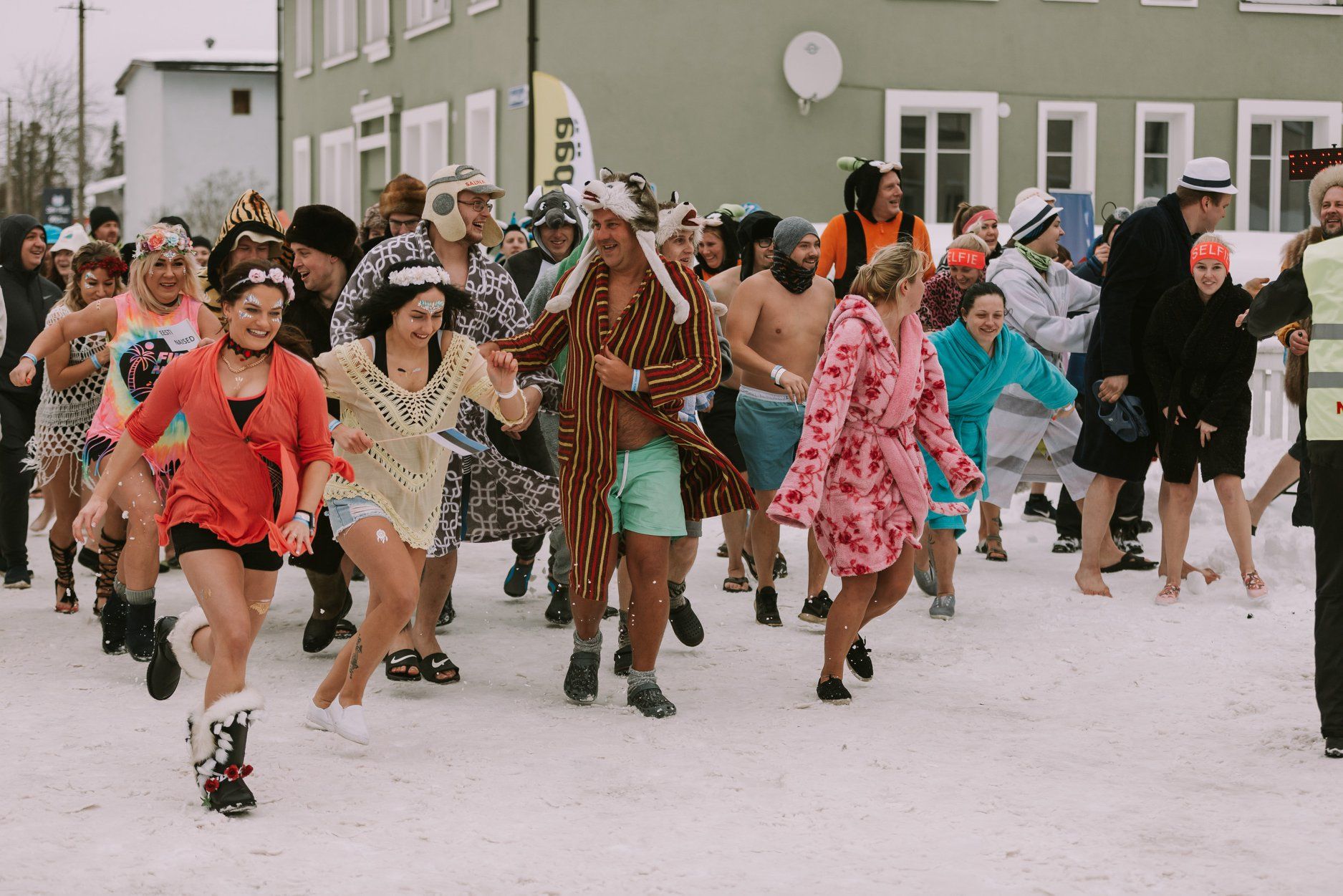 The race began in the centre of town at noon with teams setting off in five-minute intervals wearing a wide range of outfits as bizarre as the competition itself.

The first saunas on the list were portable ones arranged in the town centre especially for the occasion. 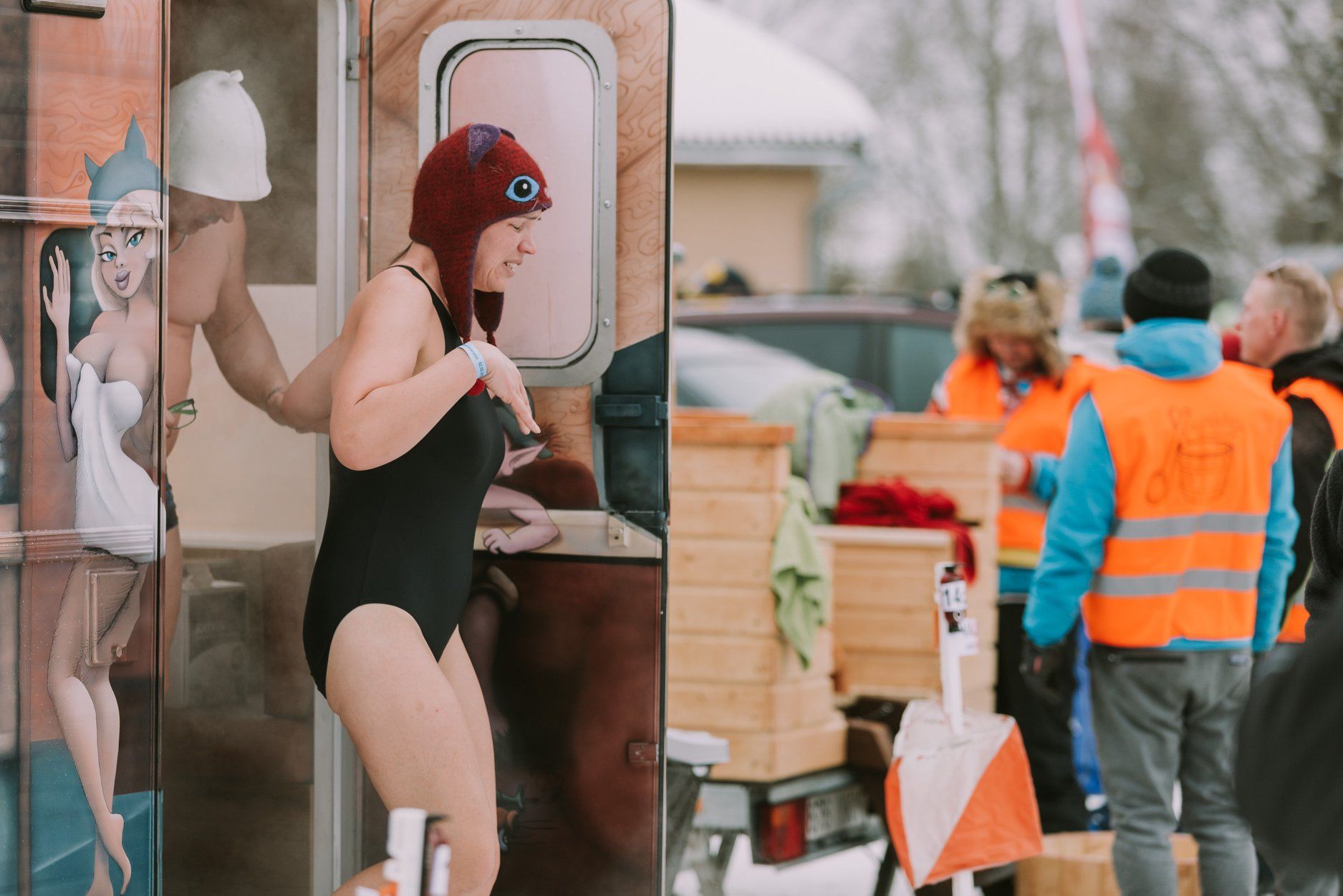 Even a group of firefighters from Karksi-Nuia, a small town near the Latvian border, had turned up with a disaster relief sauna tent and a plunge pool filled with ice-cold water. After climbing out, the fire fighters then doused the shivering competitors with warm-ish water from their hoses. 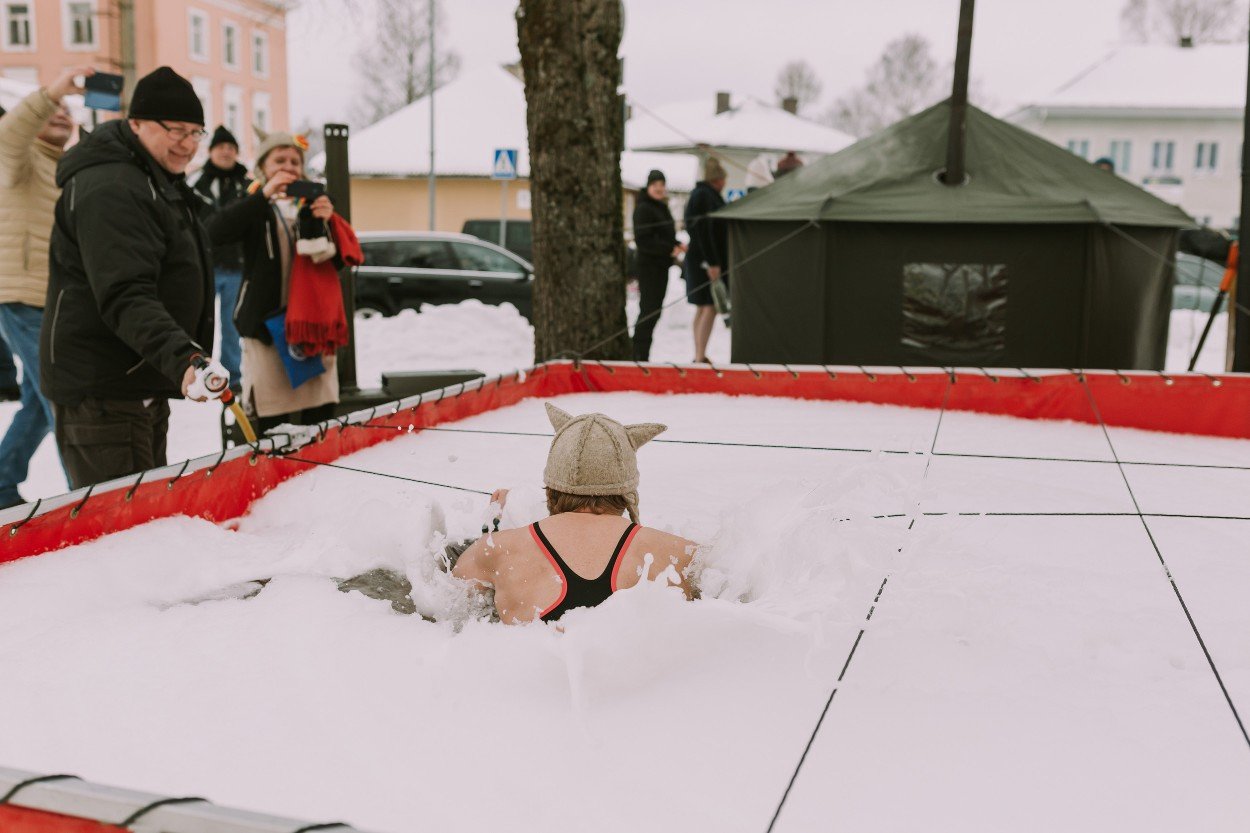 The final stop in the town centre was at the local pub, which had a sauna behind the bar and live folk music on stage to keep competitors dancing while waiting their turn to sweat it out. Not everyone was there for the sauna marathon though. Some were simply enjoying lunch as usual, seemingly oblivious to the half-naked revellers running around them.

After that, competitors jumped into their cars  –  without time to get dressed  –  and sped off to find the saunas across the countryside.

To be honest, the competition doesn’t require a great deal of athletic ability. Just orienteering and winter driving skills, the ability to briefly endure fairly extreme temperatures, and  –  perhaps most importantly  –  the ability not to take yourself too seriously along the way. 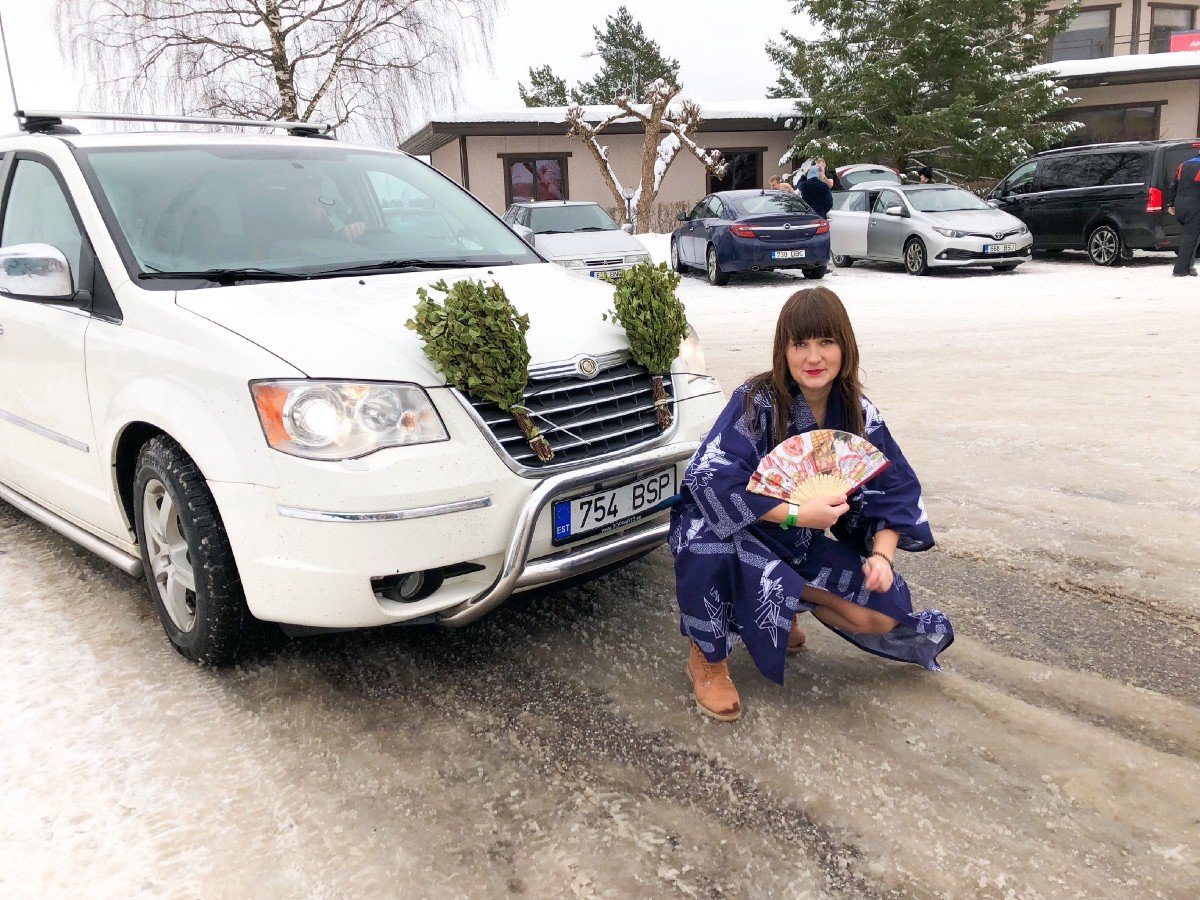 Even some of the cars were dressed for the occasion.

“I always thought people were running because it was a race,” explained my team mate, Adriano D’Ambrosio, while looking at photos of previous sauna marathons that he studied in preparation. “But I now realise that we have to run just because we are so very cold!”

Coldest weekend of the year

The Sauna Marathon always takes place in the first weekend of February because that’s typically the coldest weekend of the year. Sauna owners not only have to keep their fires burning, but also ensure that their ice holes don’t freeze over. 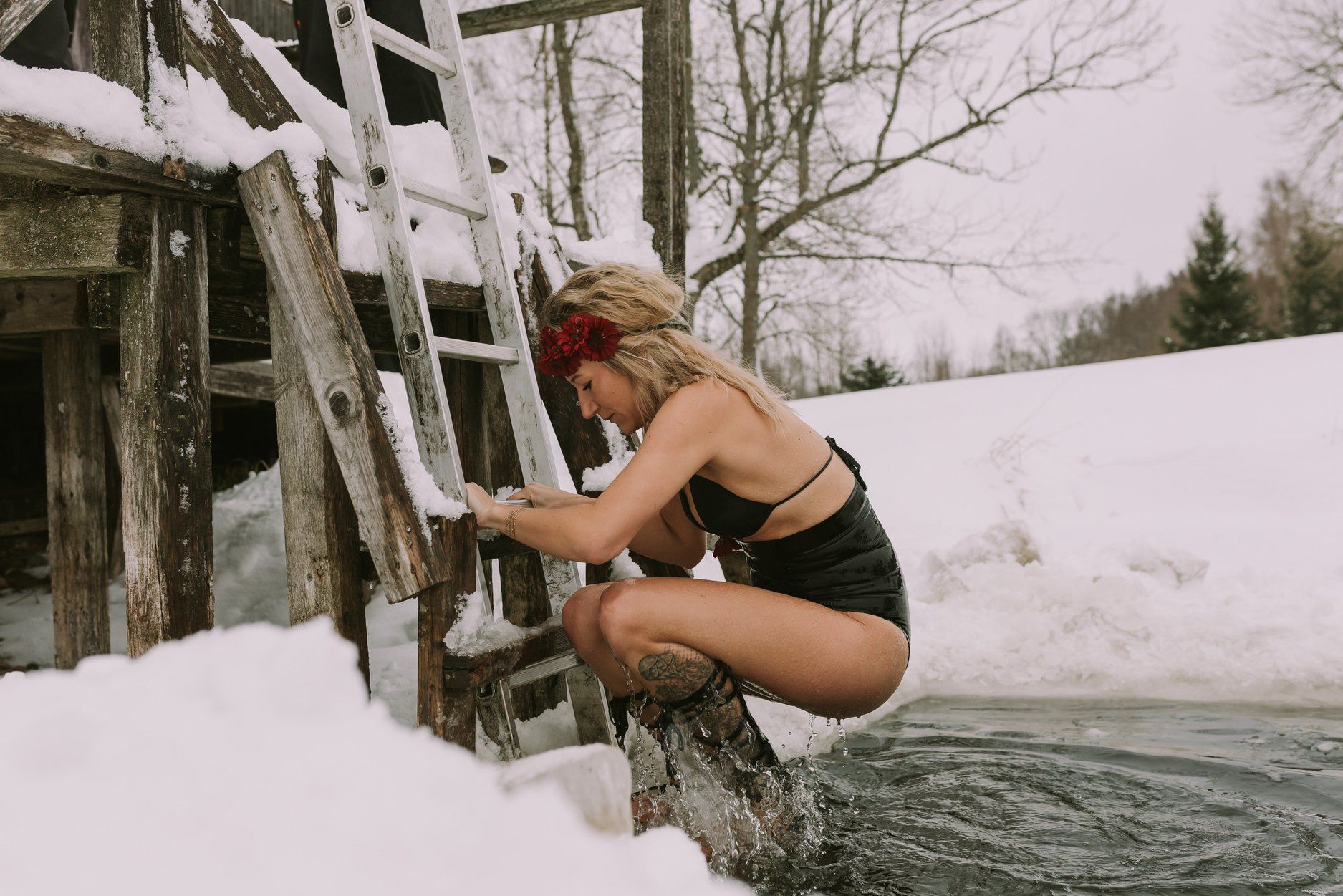 The winners are selected randomly from among the teams that complete the course and are given a hot tub, among other prizes. 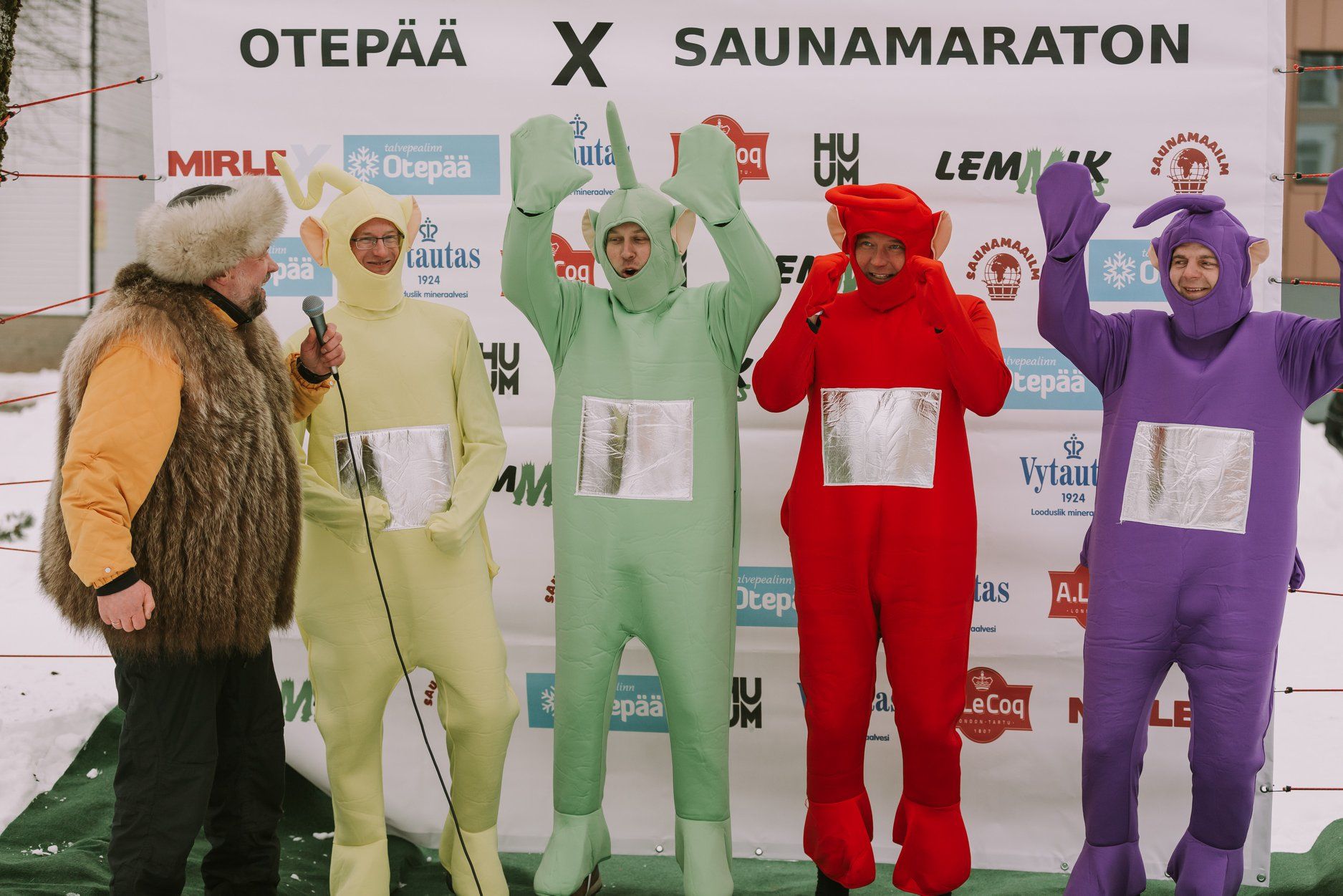 That might not sound particularly fair, but it’s a reminder not to take the competition too seriously (or break the speed limit by trying to reach the finish first). This year’s winner was team “Selfie”, if you happen to be interested.

The participants also have to rate the saunas in their app along the way  – and this is where the real competition takes place. 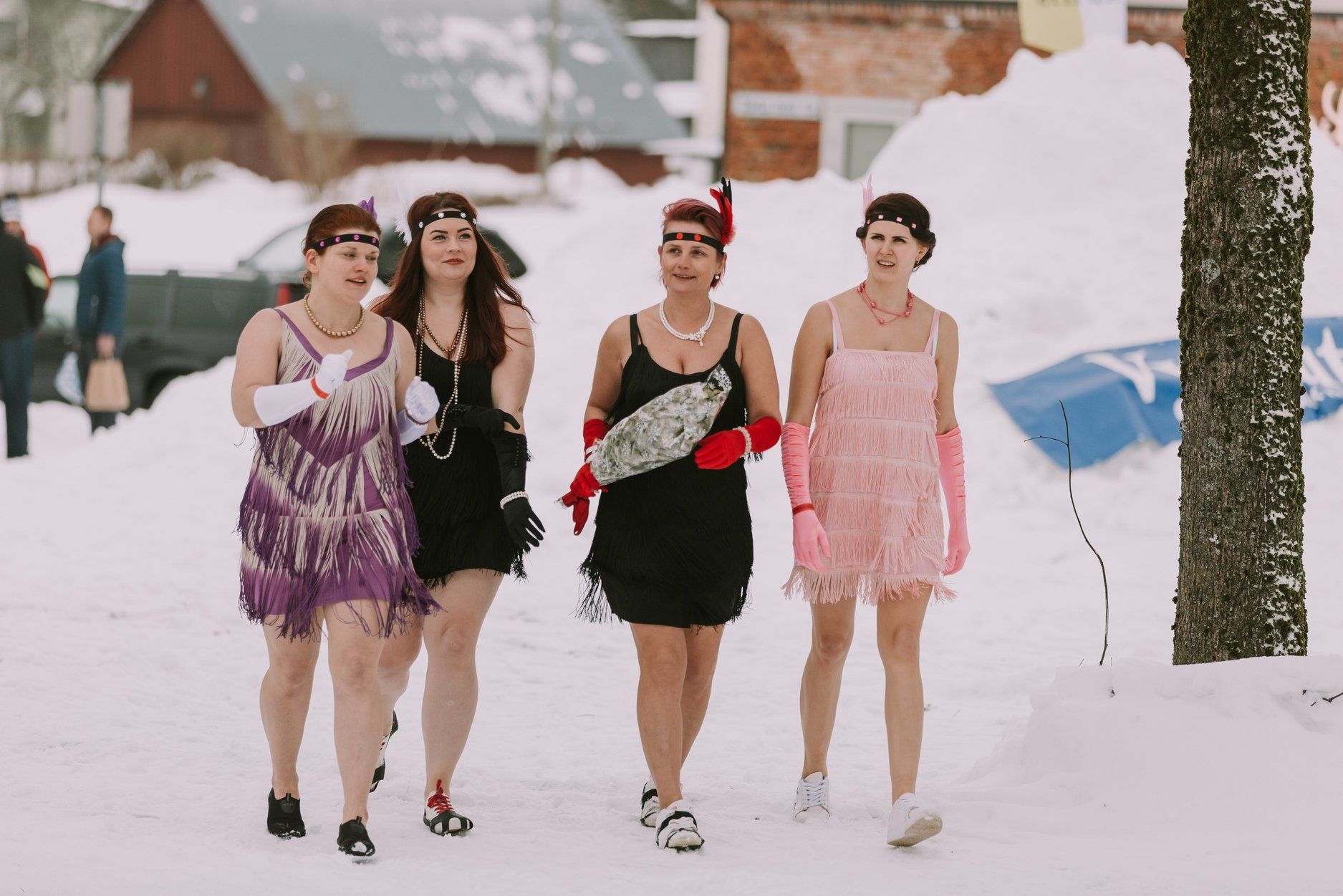 This year’s favourite sauna among participants was “Mägestiku forell”, which received a prestigious plaque that they will be able to nail above their sauna door.

At this point in the article, I should probably tell you a bit more about this top-rated sauna after gleaning some information from their website. However, their website is so light on details that it took some time to even figure out which one it was.

After debating with my teammates afterwards, we eventually figured out that “Mägestiku forell” was the oval shaped sauna next to a bar serving delicious home-smoked food. This kind of bribery is perfectly within the rules (and spirit) of the competition.

Make friends and see as many saunas as possible

The fact that Otepää’s (currently) number-one-rated sauna has no fancy website or much marketing to date is part of the reason for why the Sauna Marathon exists.

More than a decade ago, a local spa director named Indrek Vähi came up with the idea of a sauna orienteering game for the town’s winter festival. He wanted to involve not only his own luxurious Pühajärve Spa & Holiday Resort, but all kinds of different sauna owners and businesses because he recognised that they had a shared interest in bringing the community together and promoting the area’s sauna culture. 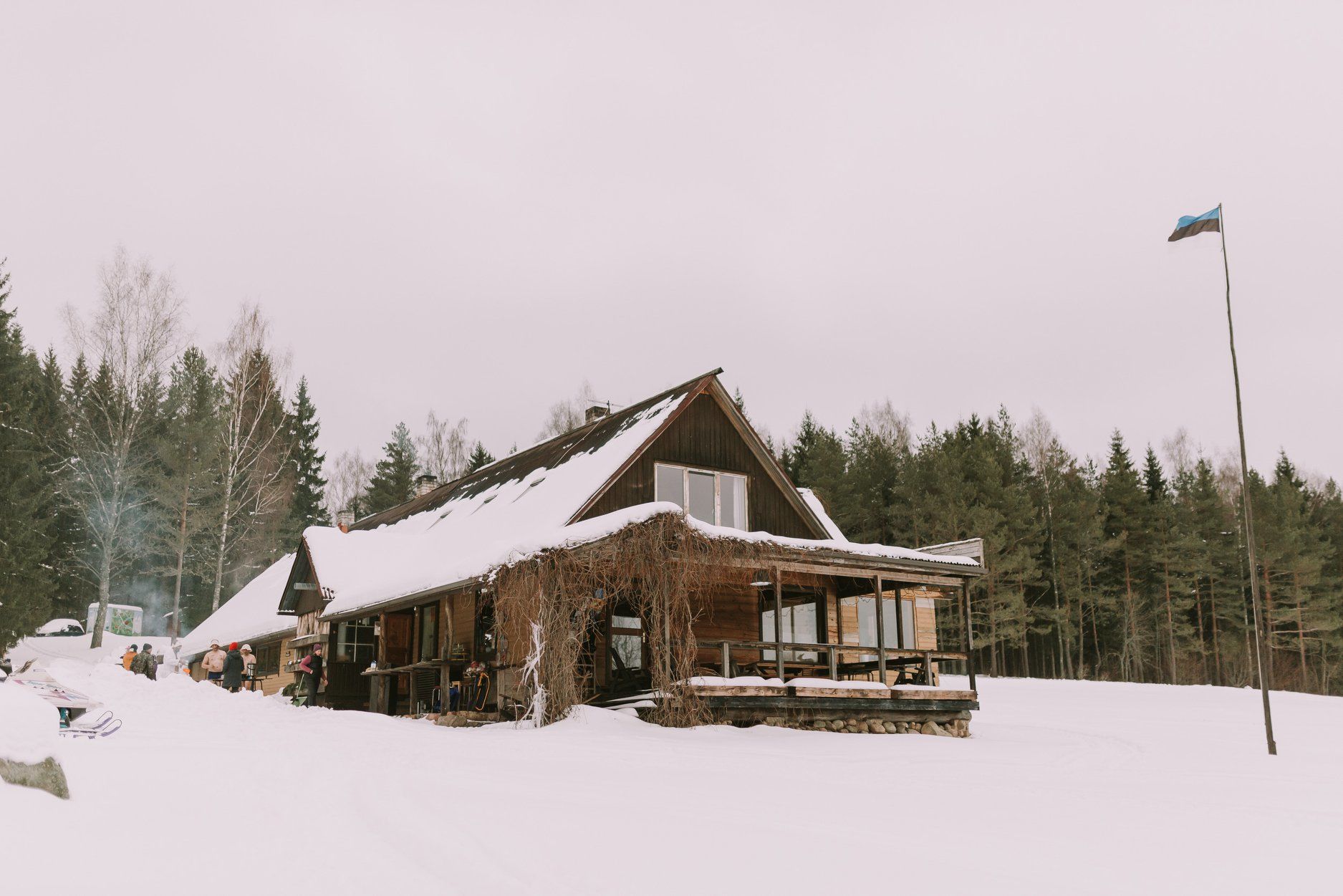 Estonia has a rich sauna culture that is older than records can recall, but it’s still not always very accessible to people visiting the country  –  75% of whom never even leave Tallinn. The weirdest and most wonderful Estonian saunas are often difficult to find or are located inside people’s homes  –  to where invitations can take a while.

The first competition was such a success though that Sirje Ginter from the Otepää Cultural Centre, which is part of the local municipality, took over the organisation the following year and renamed the competition  –  rather ambitiously  –  as the ‘European Sauna Marathon’. Unlike other competitions (since banned) that encourage participants to stay inside the sauna for an unhealthy amount of time (which is totally stupid and against the point of a sauna), this competition aims to let participants make friends and see as many saunas as possible so that they can come back and enjoy them properly at their own leisure.

Vähi has sadly since passed away, yet his legacy has lived on beyond all expectations. 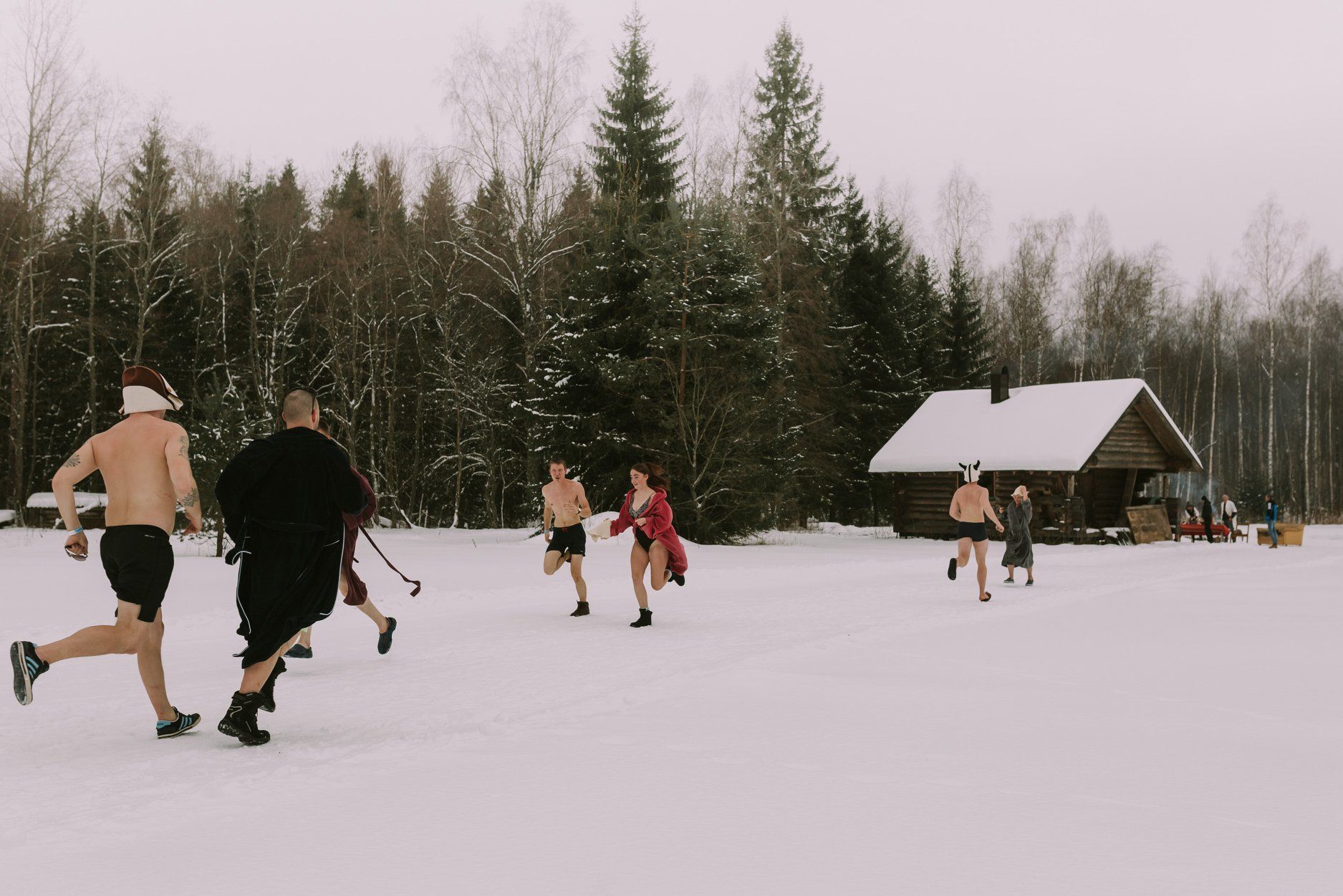 Some of the international guests live in Estonia already, but many travelled here just to take part.

The competition also attracted international media attention, including the BBC and Reuters, which both sent film crews to cover the event.

Team USA was comprised of a group of American women now living in Estonia to teach English, including Anna Blue from Washington, DC, who is also here to study the e-residency programme. She heard about the competition through our previous Estonian World article, which she then read in a Facebook group for e-residents of Estonia. Anna then rounded up her team, which included Alisa Redding from Texas.

“We agreed almost immediately because it sounded like a great opportunity to see the Estonian countryside and experience something truly Estonian,” said Redding. “It was much more fun than we expected and even though we didn’t make it to all the saunas, we loved the sense of friendship that we quickly developed with the other competing teams.”

This warm sense of friendship was a feeling echoed by many who took part. 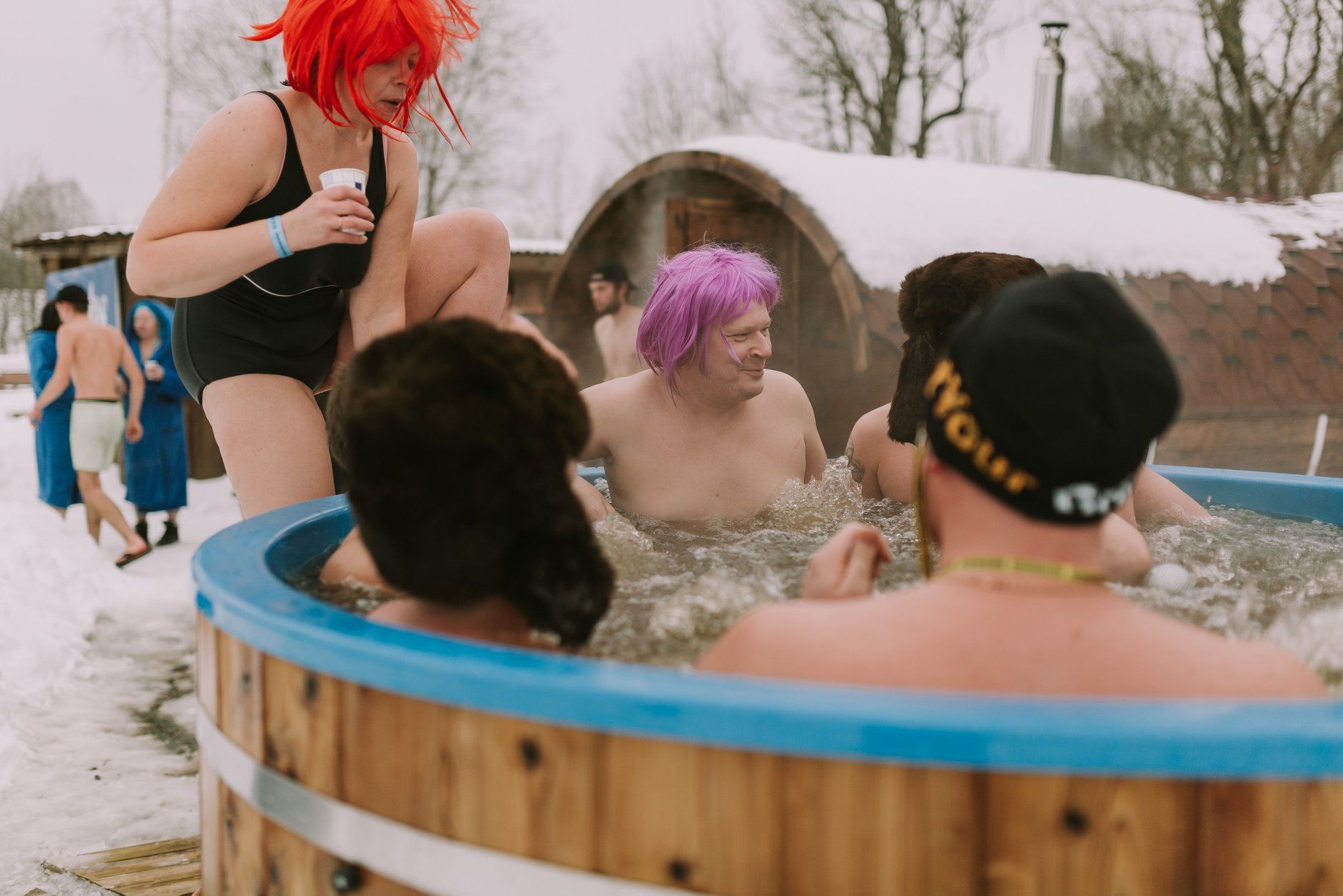 Estonians open up in the sauna

Estonians are often regarded as quiet and reserved towards strangers, yet the sauna is where they open up and speak more loudly about any issues on their mind. It’s the opposite of some countries where saunas have a library-like atmosphere and talking there will result in ice cold stares from fellow bathers.

The Sauna Marathon brings that openness to a new level as the hundreds of competitors soon start making friends with each other, as Vähi had originally envisioned.

Towards the end, the fact that it was even a competition began to be forgotten as participants spent ever more time enjoying themselves leisurely at each sauna. 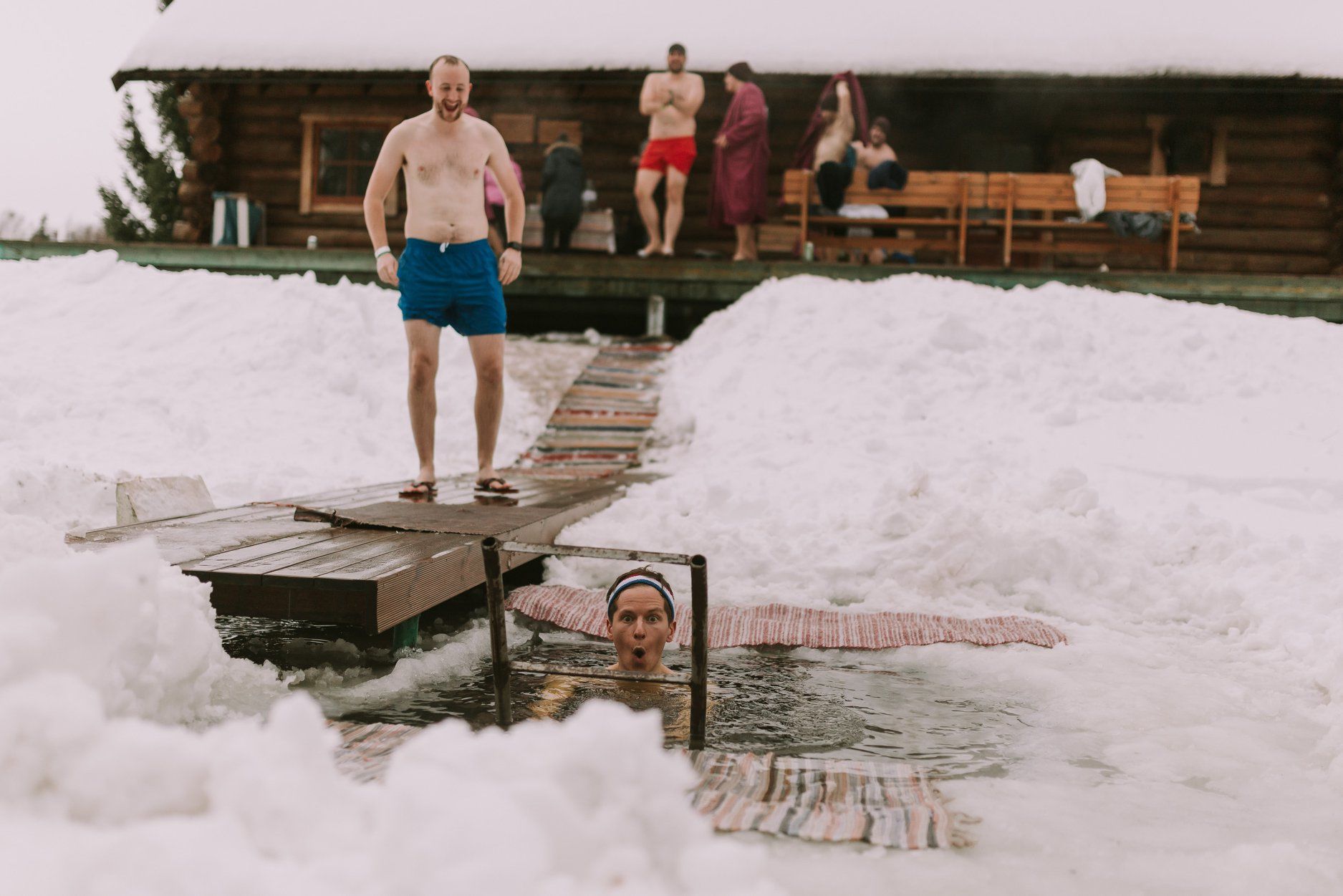 As for me, I was competing with Team Japan, which actually had just one Japanese member  –  Yushi Nakashima  –  while the rest of us wore traditional sumo-style Japanese underwear called fundoshi as part of a questionable attempt to fit in with him.

“It’s Yushi, like ‘sushi’,” our team captain said to introduce himself to fellow competitors while keeping them entertained inside each leiliruum along the way.

We arrived at one sauna that had no bucket for throwing hot water on the stones, so our fellow competitors were hopelessly trying to carry water from a nearby tap using just their hands.

“Let me try,” said Yushi. He stuck his hand under the tap to channel the water pressure into a spray, which then shot across the room in an arc and landed perfectly on the stones before sizzling away and filling the room with glorious leil (sauna steam).

“And that’s why Japan is such an advanced country,” one of the participants perched on a bench exclaimed in awe.

At the final sauna, we unsportingly decided to make full use of the facilities and so enjoyed a long warm shower before changing and returning to the finish line a few hours after the cut-off time, although just in time to arrive refreshed for the after party. 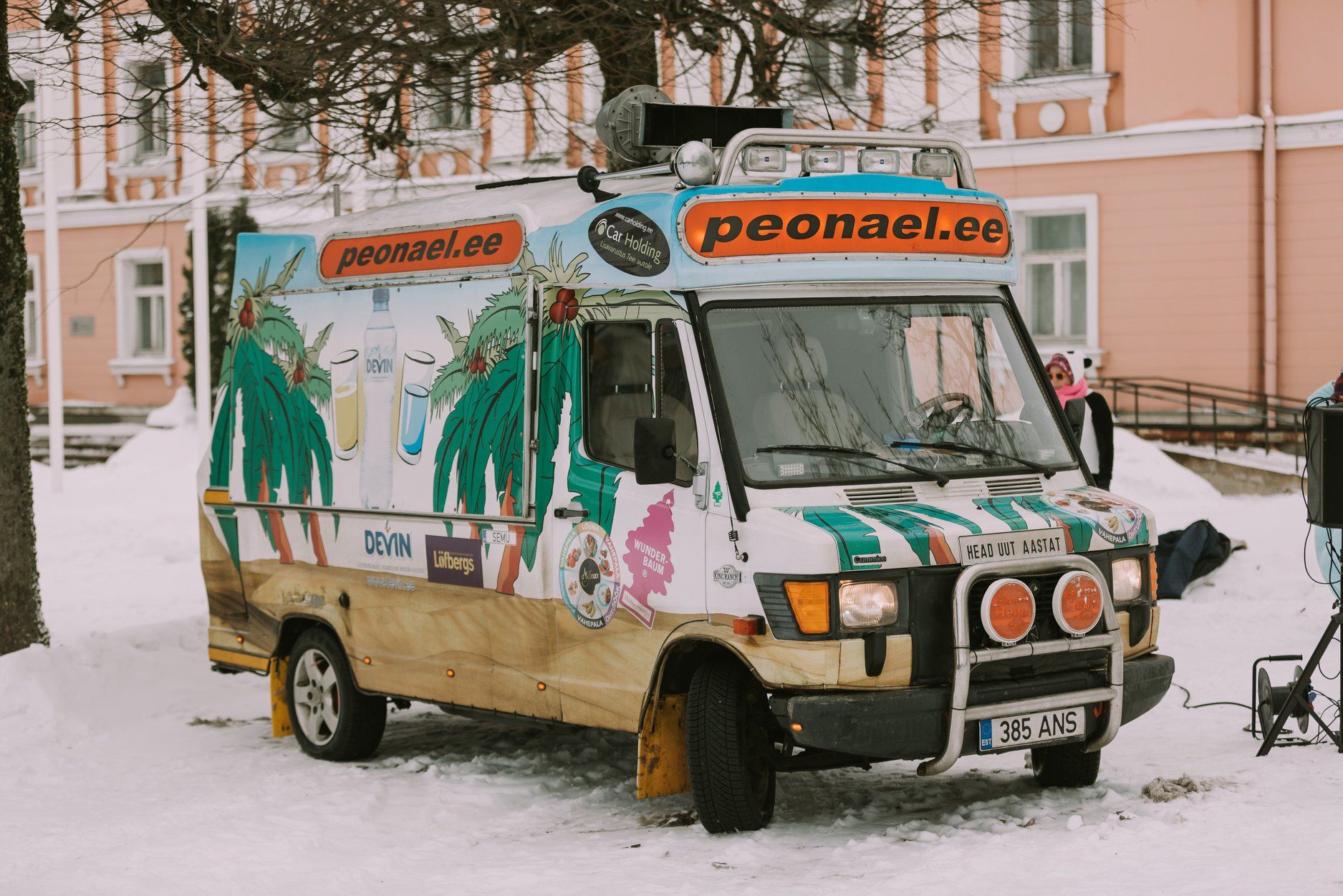 Ginter has since passed the baton for organising the Sauna Marathon to Jorma Riivald who has continued the excellent work of growing the competition, along with the municipality’s hard-working culture specialist, Merle Soonberg. In my opinion, they and their city are the real winners.

The popularity of the event poses interesting challenges for all of them. Tickets for this year’s competition sold out at record speed, but they are keen to preserve the quality of the competition for future participants rather than let it grow to ever bigger numbers. 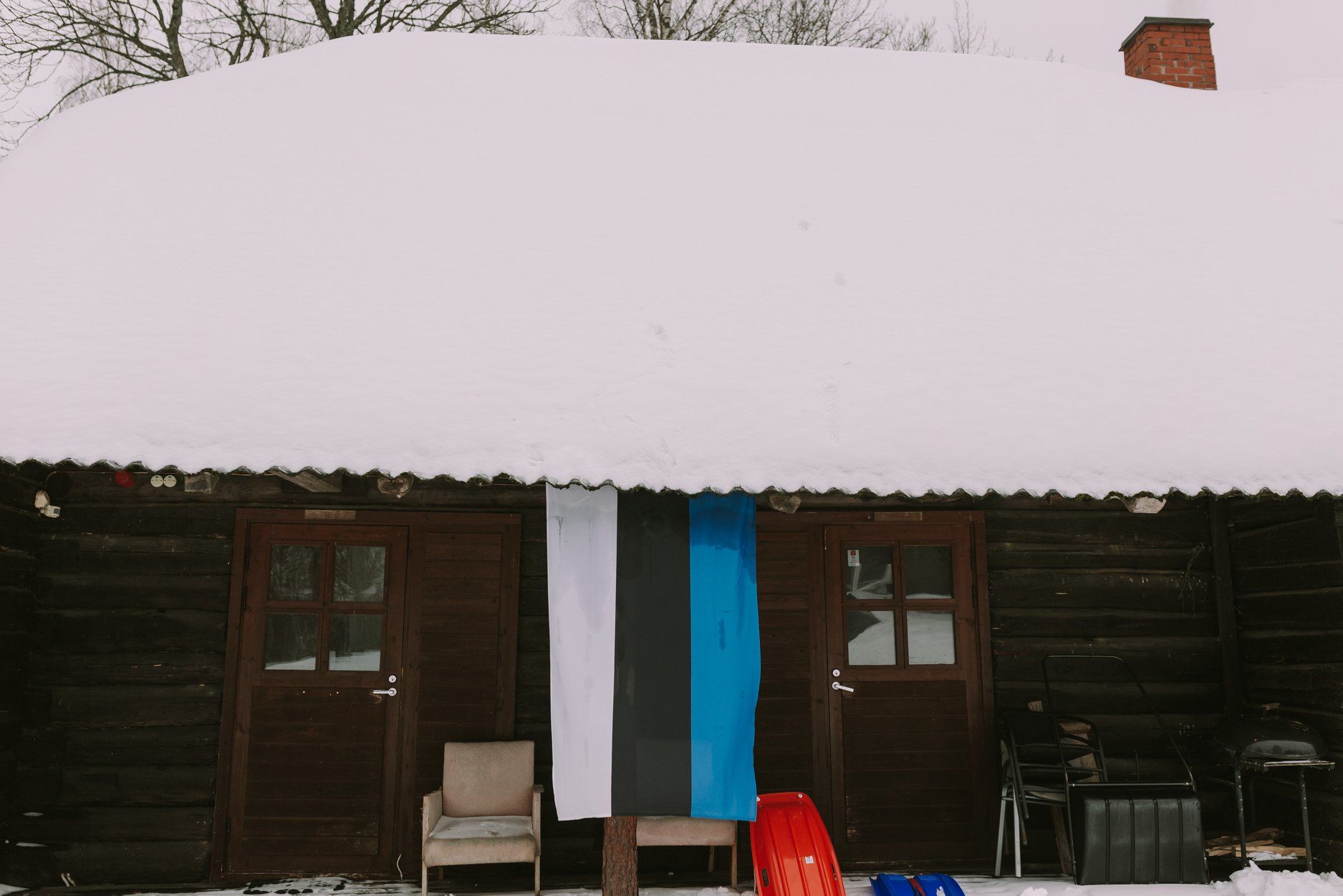 There are interesting developments on the other side of the Estonian world, however.

Ingrid Sootla from the Chicago Estonian House has revealed that they are now planning their first “American Sauna Marathon” next year in 2020. They hope it will bring together the Estonian community in America and help them connect with other friends of Estonia and fans of saunas, even inviting e-residents to take part.

“Saunas are a very important part of Estonian culture,” Sootla said. “So it is very important to us to be able to pass that along to the next generation growing up outside Estonia.”

Images courtesy of the European Sauna Marathon in Otepää and Adam Illingworth. This is a lightly edited version of the article originally published by Adam Rang in Medium. You can follow Adam’s take on Estonian sauna culture also on Instagram, Facebook or Twitter.