Recently, Estonia started to work harder on strengthening its talent pool by trying to make it more appealing for foreigners to come and work in Estonia. But what’s peculiar about this is the fact that whenever you mention the issue of accepting immigrants – no matter why they would consider coming to Estonia – the average Estonian starts to protest very vocally against it.

Recently, Estonia started to work harder on strengthening its talent pool by trying to make it more appealing for foreigners to come and work in Estonia. It’s understandable, because the Estonian workforce is aging, there aren’t enough specialists around to hire and altogether the country needs to attract thousands of new talented workers to keep its economy running and viable.

Estonia has many perks that should appeal to this new talent, eg low taxes, high-speed internet, reasonable living expenses, beautiful countryside, four distinct seasons, and a great geographical location. It’s not surprising that the country has already appealed to many foreign specialists and could, in future, attract many more.

But what’s peculiar about this is the fact that whenever you mention the issue of accepting immigrants – no matter why they would consider coming to Estonia – the average Estonian starts to protest very vocally against it. “Everyone should live in their own home” is a loose translation of the Estonian “iga roju oma koju” slogan that has recently been voiced more often than before.

The most recent issue for Estonia is the question of whether or not to accept refugees. While the European Union is contemplating how to help people who have been forced to leave their homes, have nowhere to live and nowhere to go, and have lost everything, a very vocal opposition exists in Estonia – much more vocal than the supporters – who are engaged in an aggressive campaign against accepting any foreigners who, in their bigoted minds, only want to come to Estonia “to steal our jobs and live on welfare”.

This Wednesday a protest against accepting refugees was held in Tallinn, Estonia’s capital. Two T-shirts caught my eye. One of them had the slogan “The Negro lives in Africa”, and the other one, even more outrageous, said “Negroes to the oven”. These are Estonian citizens who have become walking billboards for outright racism. 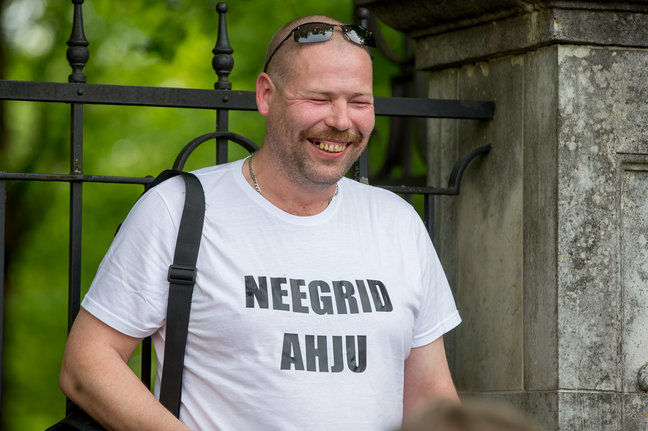 Not long ago, Kristiina Ojuland, the former foreign minister of Estonia and a former MEP, now a leader of a new party that, fortunately, didn’t win any seats in parliament, said in a Facebook post that the “white race is threatened” by dark-skinned immigrants.

I don’t even want to mention the commentary sections of daily newspapers and online portals. The online outpour against people of a different race, religion, sexual orientation or ethnicity has exceeded every human limit possible, and yet seems to be only getting worse.

Would you want to live among people who hate you?

In all that blatant xenophobia and racism, sadly so prevalent these days in Estonia, why would any foreigner want to come to this little bigoted country, either voluntarily to work, or as a refugee? Why would anybody choose to contribute to a nation that so openly and obviously hates them?

Some people have told me I generalise the Estonian population – or general population, as I’ve put it – too much. Truth be told, I don’t think the absolute majority of the Estonians are like that. But the issue is, a considerable amount of the people – the most vocal majority – actually do think and feel this way and they’re not afraid to express their thoughts out loud, be it via demonstrations, social, online or print media.

Not long ago a programme on TV asked viewers whether they would support accepting refugees. Over 90 per cent of the respondents said “no”. During parliamentary deliberations of the cohabitation act – the new law that allows both same and opposite sex couples to register their relationship – 67 per cent of the population were against it, according to the opinion polls at the time.

And, as a cherry on top, almost 50,000 (8.1 per cent of the votes given) people gave their vote to an obvious Nazi party at the last election. The same party whose supporters and/or members wore T-shirts with slogans such as “The Negro lives in Africa” and “Negroes to the oven” at a recent demonstration against refugees.

A change in the thought process

I’m an ardent supporter of freedom of speech and thought. I sincerely believe freedom of speech is one of the main basic rights of a human being – and I strongly oppose the so-called hate speech laws many European countries have enacted. I oppose these laws because people must have the right to be idiots. If this right is taken away from us, it takes away a part of what makes us human. Human beings have the right to say stupid things.

Hence my problem is not the fact that people vocally express their opinions, one way or the other. If an idiot wants to write something stupid on his T-shirt, the idiot must have the right to do so (and if someone wants to punch the idiot in the face for it, then that someone should have the equal right to do exactly that). My problem is that this idiocy among the general population – yes, yes, that general population again – is so overwhelmingly taking over that one must ask the question, what the hell is wrong with you, people?

The key to… civilise, for the lack of a better word, the general population is not through legislation, nor through banning the freedom of speech. It can only be done by the people themselves changing the way they view the world around them. By starting with asking oneself the question, why do I feel this way? Why do I hate someone whom I haven’t even met just because he’s from a different religion, ethnicity or skin colour? Do I really believe if a foreigner settles in Estonia, they’re going to steal my job? What if they’ll contribute to job creation instead? Do I really think they’re coming here to live on welfare? Or maybe, just maybe, the Estonian social welfare system (with the jobseeker’s allowance being a whopping €2.11 a day) isn’t really so appealing that anybody would settle in the country just for that?

Perhaps, if we could all process this basic maths and logic and come to the conclusion that those economic fears don’t really make sense, we could also overcome our fear of people being different from the homogenous population of the country? Because, if we can’t, then we should admit to ourselves we’re just plain old racist.

It’s seriously about time to grow up and see further from what’s right under your nose. Otherwise Estonia will face the prospect of becoming a pariah among nations. Can you really afford to be in the same club as Russia and Belarus?

Estonian World strongly condemns racism and prejudice – there should be no place for any form of xenophobia or racism in Estonia. Estonian World also supports a new initiative, Tolerant Estonia.