The four Robinson R44 helicopters of the Estonian Air Force have been modified with night vision technology in order to expand their night-time air search and rescue and surveillance capability. 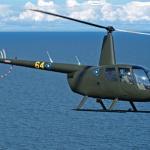 The helicopters have been retrofitted with a night vision imaging system and external lighting which works alongside night vision goggles worn by pilots. The work was undertaken in Estonia by engineers from Texas-based Rebtech at the recently upgraded Ämari Air Base in Harjumaa County, under the Federal Aviation Adminstration (FAA) guidance for foreign military programs.

The Robinson R44 is a four-seat light helicopter with a maximum speed of 150 mph and a maximum range of 350 miles. It is the backbone of the Estonian Air Force with four units in service. It is additionally operated by the air forces of Bolivia, the Dominican Republic and Lebanon.

The primary role of the Estonian Air Force is air surveillance and air search and rescue. Airspace integrity policing of Estonia and the Baltic states is carried out by a NATO quick reaction alert force on a rotating basis between member states, currently based out of Zokniai airbase in Lithuania. As of July 2013 this is tasked to Dassault Mirage F1 air superiority fighters of the French Air Force.