A memorial to the victims of communism is to be erected in the Canadian capital, Ottawa, to serve as a public reminder of the millions of victims of the ideology and movement that once took hold in Russia, China and many other countries – and also once ruined Estonia.

Around ten years ago, various community leaders, government officials and foreign diplomats in Canada suggested building a memorial in Ottawa that would recognise the victims of communism and the contribution Canada has made in coming to their aid. In 2015, it was decided that the memorial will be built in the Ottawa’s Garden of the Provinces and Territories.

For example, 14,000 Estonians immigrated to Canada between 1946 and 1955, escaping the Soviet Union-imposed communism in their homeland. In addition to Estonians, 20,000 Russians, 34,000 Ukrainians, 13,000 Latvians, 37,000 Hungarians, 95,000 Poles, 70,000 Vietnamese and over 10,000 Czechs and Slovaks – the list goes on – found safe haven in Canada, while escaping communist rule in their homeland. In total, over eight million people in Canada trace their roots to countries that suffered under communism.

Public reminder of the millions of victims of communism

The non-profit organisation responsible for the monument, Tribute to Liberty, said the memorial, due to be unveiled in 2019, “will serve as a public reminder of the millions of victims of communism, and will bring the suffering of these victims into the public’s consciousness”. “For these victims and many others, Canada represented – and continues to represent – peace, order, democracy and, above all, liberty.”

The memorial, Arc of Memory, designed by Paul Raff, Michael A. Ormston-Holloway, Brett Hoornaert and Luke Kairys, features two gently curving wall-like metal frames totalling 21 metres (69 ft) in length and almost four metres (13 ft) in height. The walls support more than 4,000 short bronze rods densely arranged along 365 steel fins, each one pointing at a unique angle of the sun, for every hour of every day, across a year. The memorial would be split in the middle at winter solstice, the darkest day of the year, inviting visitors to step through in a metaphorical journey from darkness and oppression to lightness and liberty. 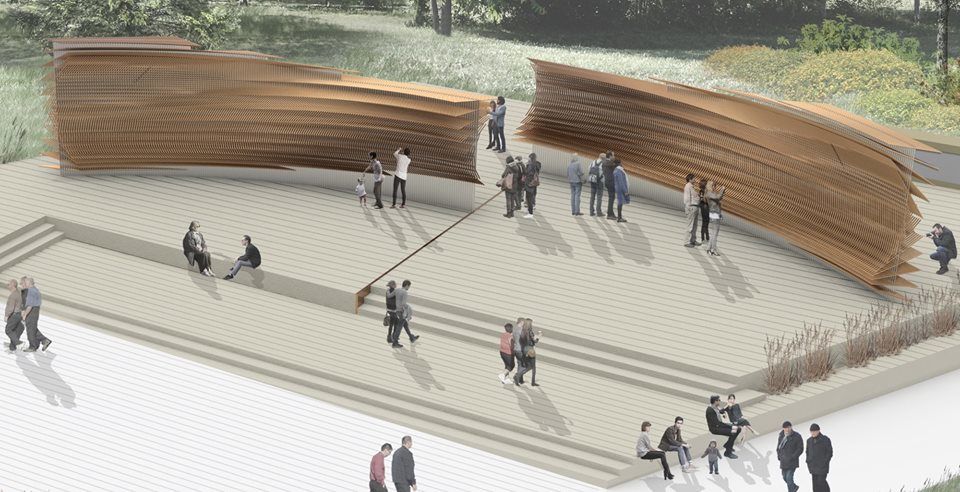 The communist movement achieved its first real success during the 1917 revolution in Russia when the Vladimir Lenin-led Bolsheviks managed to grab power. Later cemented by Lenin’s successor, Joseph Stalin, the communist ideology subsequently spread under Mao Zedong to China. Following the Second World War, the Soviet Union under Stalin occupied large parts of Europe, including Estonia.

Cover: The proposed memorial (images courtesy of Tribute to Liberty).